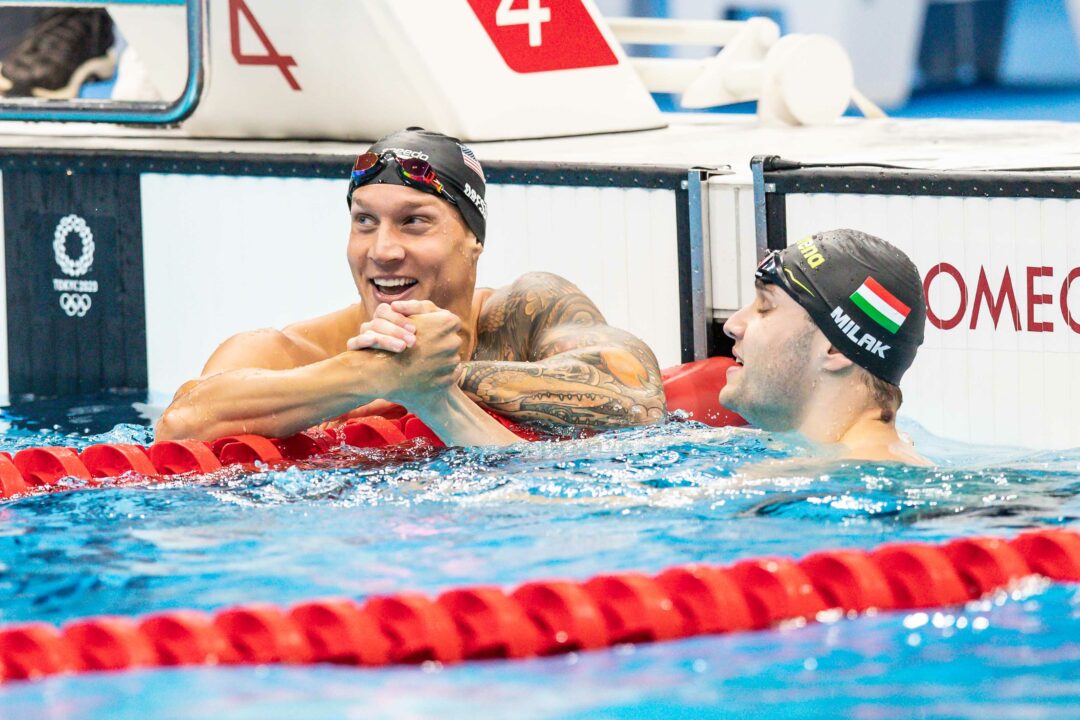 In a year where competition returned in full force, see who gets honored with our 2021 Swammy Awards. Archive photo via Jack Spitser/Spitser Photography

After the difficult year that was 2020, things returned to some form of normalcy in 2021.

We made up for what was lost last year, headlined by the Tokyo Olympic Games, but this year really had a bit of everything. We had the first NCAA Championship meets in two years, various national Olympic Trials, both the SC and LC European Championships, and things wrapped up with the recently-concluded Short Course World Championships in Abu Dhabi.

We also were kept entertained in the months between the Olympics and SC Worlds, with Season 3 of the International Swimming League (ISL) featuring the majority of the best professional swimmers in the world racing head-to-head week in and week out.

The year served as a changing of the guard of sorts, with several veteran swimmers, likely anticipating retirement after the 2020 Games, surpassed by the next generation. The one-year Olympic postponement forced the older athletes to grind through one more year of training, while the younger swimmers came in with nothing to lose and everything to gain.

Now that 2021 is coming to a close, it’s time for our annual Swammy Awards to be handed out. We’ll keep track of all of our winners below.

Who else could female possibly go to? I guess Kaylee got an individual WR compared to Emma’s relay WR, but Emma got 3 more medals including an additional gold. I guess you could also make the case for Titmus just because Ledecky was so dominant before Titmus came along. But they’re really the only 3 it could possibly be, and I can’t see it going to anyone but Emma.

Yes, all three are tied with 2 individual golds in Tokyo, but Kaylee’s individual WR is worth the 10% of uncertainty.

Emma has a relay world record plus three more medals and an extra gold, plus the second fastest individual swim ever. I can’t see one WR being better than all the extra Emma has.

Thank God Dressel finally gets to be the main picture on an article. I feel like he hasn’t been the cover photo at all this year.

Yes, but I think its US swimmers.

Heart of a champion Rikako Ikee

I can’t imagine who could win the male age group 13-14 swimmer of the year. Hmmm. Real head scratcher. Too bad there weren’t any 13-14 male NAGs broken recently!

Male swimmer of the year: Dressel
Female swimmer of the year: McKeon
Breakout male: Hafnauoi
Breakout female: Jacoby (I would go with O’Callaghan but Jacoby will get it because she’s American)
African male: Sates
African female: Schoenmaker
Asian male: Wang Shun
Asian female: Just based on Olympics it should be Yufei but Haughey had a great Olympics plus a dominant year overall with an individual WR so I’m going with her
Canadian male: Liendo (already announced before I made this list)
Canadian female: MacNeil (not even close really, she was the best female Olympian apparently lol)
Central America/Caribbean male: Carter
Central America/Caribbean female: Atkinson
European… Read more »

I don’t think you’re automatically the breakout star because you win one individual gold. She didn’t break any records. Mollie had more golds than her, more overall medals than her and broke the WJR. Jacoby also swam slower than Schoenmaker’s heat swim and is pretty lucky she wasn’t able to repeat it.

Mollie got her golds by swimming prelims and Jacoby’s 100 breast (#7 alltime) was still a comparatively better swim than Mollie’s 200 free WJR (#20 alltime) it’s just that the WJR in 100 breast is quite a bit stronger than in 200 free and used to even be the WR.

The only reason mollie only swam the heats is because Australia really f***ed up and didn’t race Leah Neale at all until the 4 x 200 final. You can’t take someone to the Olympics and not race them so despite Mollie’s WJR she was left of the team. Who knows if she had of swam then maybe the team would have done better than bronze. I think they will choose Jacoby cause of the gold and story line but the facts are she was bloody lucky Schoenberg and King weren’t at their best.

While Maggie does deserve the 🇨🇦 nod, Masse must get some consideration. She won 5 Ind 🥈🥈🥈🥈🥈 in EVERY Olympic and WC Backstroke race this year. While Penny and Taylor and Maggie have been the superstars of the 🇨🇦 teams in respective years, and deservedly so, Masse has been an absolute rock racing to the podium in every single Championship meet the past 6 years except 2018 SC Worlds where she wasn’t there. One of the greats…!

Totally agree. If Maggie had not won Canada’s only Olympic gold then I would be minded to give this to Masse instead. Or if Masse had won either of the back events I would probably have given it to her over Maggie as well.

But great for Canada that they have so many strong female swimmers that it’s hard to choose the best one!

Junior male surely Popovici or Sun-woo. 47 mid and 1:44s in the big pool in the Olympics trumps Sates’ short course feats. No one else has been both sub-47.6 and sub-1:45 in textile, not Phelps, Agnel or PVDH, until these two did.

Ohashi won 2 individual golds – she’s being overlooked for Asian female. Haughey is very flashy and had a great isl and sc worlds, but still, 2 x individual golds at the biggest meet of the year is a pretty good argument.

Hard to argue against a gold medal winner from Alaska.

The whole small town Alaska shtick doesn’t mean anything anywhere else. Trying to frame any American as an underdog when they outspend every other country on swimming 1000 to 1 is a bit ridiculous.

While that’s a fairly simplistic look, because there are other parts of “swimming,” I’d need to see a pretty compelling case to support 1000 to 1.

Swimming Australia outspends the US on swimming….per capita ;-).

Now tally up the cost of all those college swimming teams.

Ok, 1000-1 was hyperbole. But my point that the US spends more money and invests more resources into swimming than any other nation (and it’s not even close) is absolutely correct, and I’m sure you know it is.

The vast majority of money spent on swimming does not come from USA Swimming. How much money are all of the scholarships in the entire NCAA worth? How much money is the combined salary/remuneration/sponsorship of every coach, swimmer and swim related staff member in the USA? How much money is spent on maintenance of equipment and facilities? According to the association of Pool and Spa Professionals (lol that that’s a thing) there are about 309,000 public swimming pools in the USA. Australia… Read more »

The USA also provides massive opportunities for tons of non-Americans to train in the USA. Who else does that? Nobody. Give the USA its due respect.

We’re talking about funding for swimming. I’m not sure how what you’re saying is relevant to what I wrote?

And of course no surprises that Braden ignored it lol

Wow, this is very interesting. I feel like there is a term paper in here dying to get out. Or at least a longer Swim Swam article! Just needs some references and you’re in business. Braden? You might have a new stringer here.

No to a good amount of these..

I got liendo right

Is cunha eligible for SA female ?

She is the clear pick if she is but idk

For regional awards, we focus on pool swimmers – unless someone did both, then the OW success counts as a bonus for them.