2021 Swammy Awards: US Club Coach of the Year – Ron Aitken 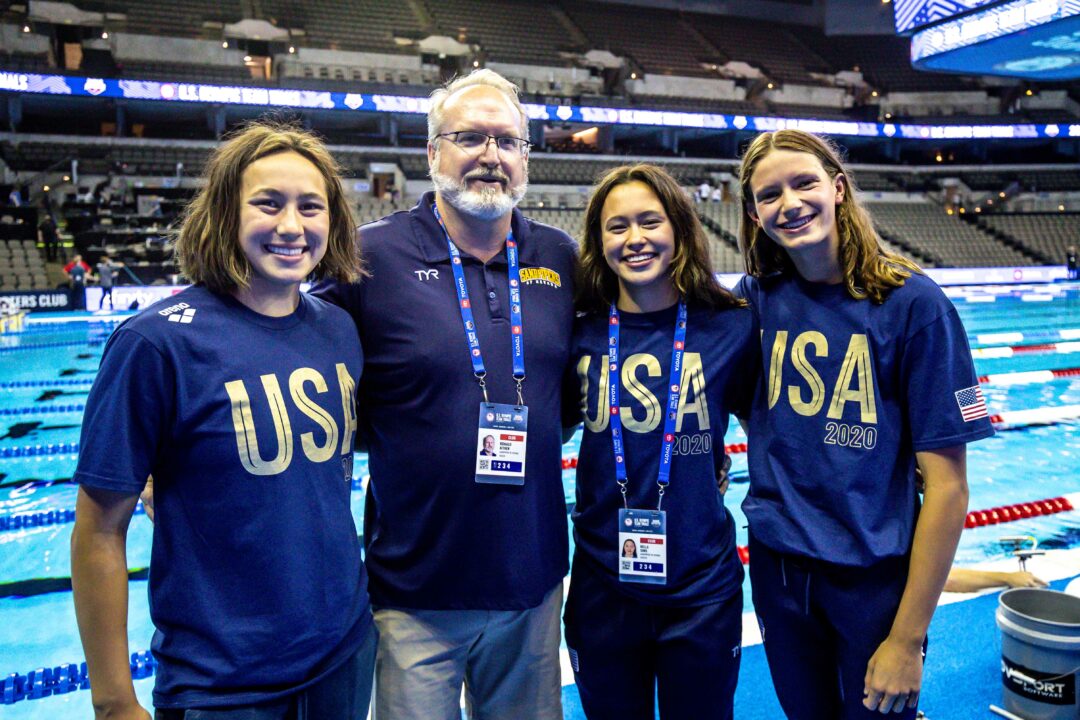 Ron Aitken has been named the recipient of the Swammy Award for US Club Coach of the Year following a dominant year by his Sandpipers of Nevada. Archive photo via Jack Spitser/Spitser Photography

This award specifically recognizes accomplishments with junior U.S.-based athletes, and puts a bigger focus on depth and success from a large number of swimmers. Coaches can theoretically win both awards.

Ron Aitken has been named the recipient of the Swammy Award for US Club Coach of the Year following a dominant year by his Sandpipers of Nevada at both the national and international levels.

In 2021, Aitken coached three swimmers onto the 2021 US Olympic Team: Erica Sullivan, Bella Sims, and Katie Grimes, the two latter of whom were the two youngest swimmers on the entire Olympic Team. Such a performance netted a spot on deck in Tokyo, though he wasn’t named to the official USA Coaching Staff. In Tokyo, Aitken’s swimmers exceeded expectations, with both Sims and Sullivan walking away from the meet with silver medals, and Grimes finishing 4th individually in the 800 freestyle.

Following the Sandpiper’s performance in Tokyo, the team continued to dominate on the national stage at the USA Swimming Winter Junior National Championships, taking first place overall. At the meet, several Sandpipers swimmers posted some of the top times in age group history. The aforementioned Sims won the 200 butterfly in a time of 1:53.91, good for #8 all-time among 15-16 girls and she later swam a 9:31 in the 1000 free, also good for #8 all-time in that age group. Grimes, meanwhile, posted a time of 15:34.74 in the 1650 freestyle to cut almost 7 seconds off of the meet record in the event, moving up to #2 all time amongst 15-16 girls, only behind Katie Ledecky.

To cap off a record-breaking year, the Sandpipers women’s 800 freestyle relay of Grimes, Sims, Claire Weinstein, and Paige Kuwata dropped a time of 7:02.90, the fastest relay ever swum by a junior team, shattering the Juniors meet record by 3 seconds. However, the time will not stand as a NAG because Weinstein is still only 14-years-old.

Currently, Aitkin has 6 athletes on the US National Team, including Sims, Grimes, Sullivan, Bowe Becker, Blake Pieroni, and Dylan Gravley. He also has 3 athletes currently on the US National Junior Team: Kuwata, Nick Simons, and Brice Barrieault. He also is the coach of breakout swimmer Ilya Kharun, who entered the scene in 2021 after being unheard of, breaking the NAG record in the 15-16 100 butterfly. In less than a year, Kharin has gone from an un-ranked swimmer to being one of the top recruits in SwimSwam’s class of 2023, committing to Arizona State.

Can we talk about how 2 of 3 honorable mentions all subscribe to the GAIN Dryland program? I don’t think it’s a coincidence. Thoughts?

Oooh, a negative thought, downvote, but no commentary.

Are you one of those “dryland doesn’t matter” kinda folks? Or, just a “have the kids do a lap around the park” coach? Maybe you go the route of printing out a list of exercises and handing it to the kids at the beginning of the season?

I’m not implying that dryland is the secret to success for these teams. I’m saying that as an additive to excellent swim coaching, they’ve cracked a nut that most programs/coaches only dream of achieving.

“I’m not implying that dryland is the secret to success for these teams.”

Sure you are. You clearly came here to ad-spam for your dryland program. That’s why people are downvoting you.

The Sandpipers are a GAIN team as well

Congrats to Ron, all the kids who train so hard in his system, and to Coach Michael Kinross who has a hand in this success as well!

(Also of note, It’s Ilya Kharun and Nick Simons, as well as Brent Arckey, their names are all spelled wrong in the article.)

Also, it’s Blake Pieroni not James Plage who represents the Sandpipers on the National Team….Plage is a Wolfpack Elite swimmer…

This guy is the new Dick Shoulberg. He should be overall coach of the year, not just US club coach of the year. Keep in mind that as a club coach he draws from a limited geographical area, in contrast to college and national team coaches in other countries. Consider the following thought experiment: clone a great college coach 100x and send them to lead 100 other college swim program in the country. Undoubtedly, performance in the US would improve, but the impact might be limited due to finite talent available in the feeder networks. Now consider instead cloning this guy to 100 other comparable metropolitan areas in the US. The increase in talent feeding into all college programs would… Read more »

It’s Also notable for plumb that Jake Mitchell left Michigan right after NCAAS and trained with him. Probably a big reason he went from having an okay college season to making the Olympics

I love how much he shares. Gives to the USA Swimming community — this is a no-brainer (lots of great coaches but still)