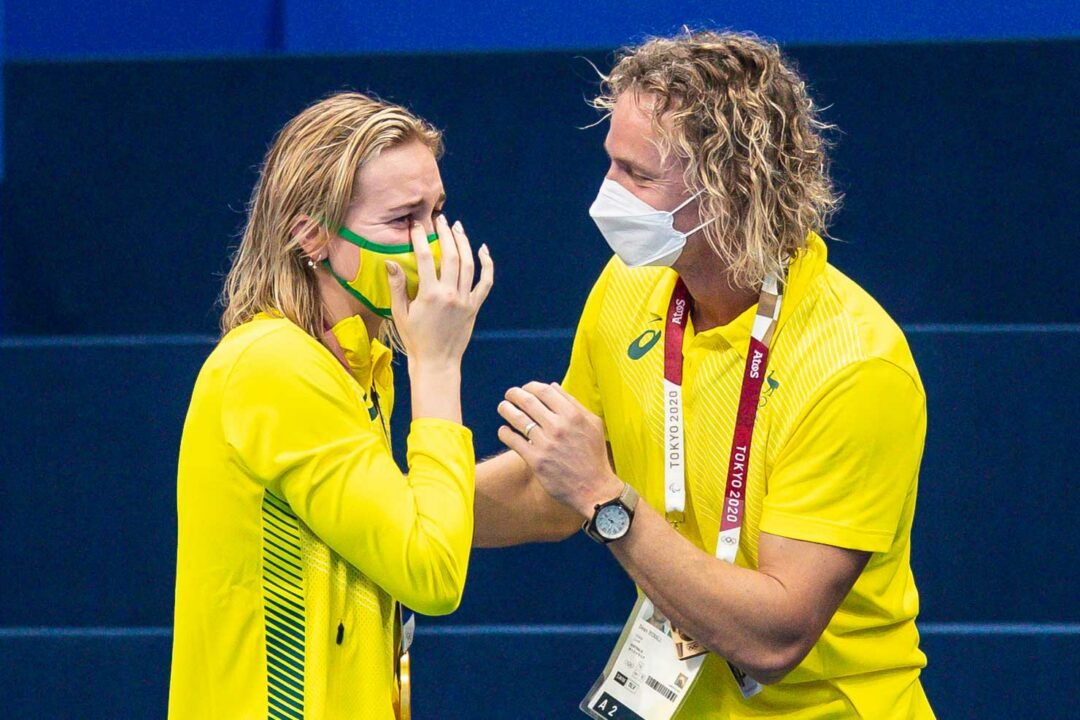 After watching his swimmer win Olympic gold in epic fashion, Dean Boxall's reaction quickly made its way across the internet. Archive photo via Jack Spitser/Spitser Photography

After the one-year delay, the swimming calendar in 2021 was centered around the Tokyo Olympic Games, and fittingly, the sport’s most viral video of the year came during the competition.

With the world watching, Australian Ariarne Titmus and American Katie Ledecky had an epic head-to-head battle in the final of the women’s 400 freestyle during the second finals session from the Tokyo Aquatics Centre, with Titmus ultimately getting the better of her rival to win her first career Olympic gold medal.

After Titmus’ monumental victory, TV cameras panned over to her coach, Dean Boxall, who was overjoyed, to say the least, by the result.

Boxall essentially lost his mind after watching his swimmer dethrone the most dominant champion in the sport, and the clip of him celebrating post-race quickly made its way across the internet.

Note: Multiple clips included in case certain readers are unable to view some due to geo-restrictions.

I’ll have what Dean Boxall is having. pic.twitter.com/LlQoQ0cwWv

Dean Boxall 🇦🇺 is at it again.

Another gold for Ariarne Titmus means another amazing celebration from her coach.

Boxall wasn’t done there, as Titmus won a second gold at the Games in the women’s 200 free, eliciting another, although more measured, celebration from the coach.

A reaction worthy of it’s own gold medal 🥇

Dean Boxall 🇦🇺 is at it again.

Another gold for Ariarne Titmus means another amazing celebration from her coach.

When’s the baby due?

Nothing is going to top Laurie Lawrence after Duncan Armstrong won the 200 free in 1988. Laurie is being interviewed immediately afterwards by an unsuspecting television commentator. What does Laurie do? He slaps the poor guy in the face a few times because he can’t control his emotions…..AND…..in the process, ended up breaking the guys jaw!

Where’s the Greg Meehan reaction video from the same race?

I prefer the full Australian version, where Boxall is quite measured and concerned and stationary as Titmus trails by nearly a body length, then visibly becomes more interested and nervous as she closes the gap at the end of the third 100, to the growing confidence on the penultimate 50, and finally unleashed euphoria at the end. I’m not sure the longer version is readily available. I was surprised not to see it here. This is one video that includes it: https://youtu.be/OWsjxDXq2BI?t=272

Thanks for posting this. Excellent build up to the finish.

Must be pretty cool to be a coach having prepped an athlete to do something you thought/hoped she was capable of deliver exactly as planned on the biggest stage against the distance GOAT.

This video makes me laugh everytime I watch it. The coach’s celebration, the somewhat frightened usher and the reaction of the commentators… priceless!

It really couldn’t be anytthing else.

I spoke too soon, I bow down before you oh holy one.

Dean’s family’s reaction to him winning Gold in the 200 Free at Tokyo should’ve been an honourable mention.