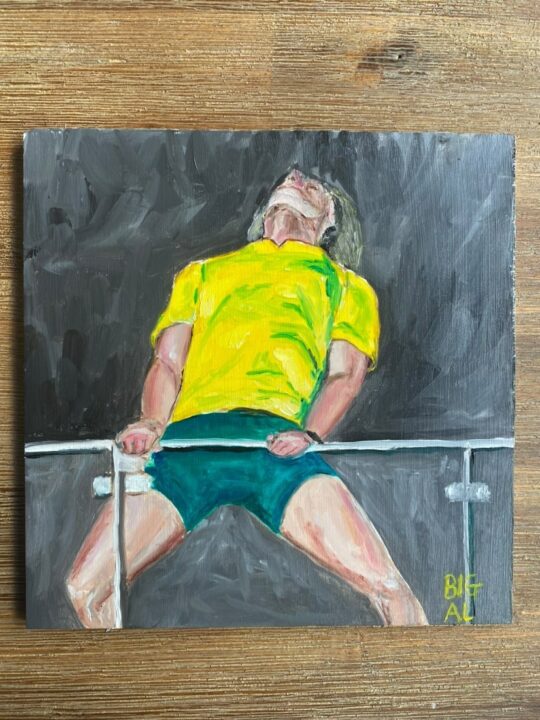 Dean Boxall's enthusiastic celebration of Ariarne Titmus' gold medal has set off debates around the world. Alex Trevarthen thought it was "beautifully authentic."

Australian artist Alex Trevarthen has immortalized one of the iconic moments of the Tokyo 2020 Olympics in oil.

When Australian swimmer Ariarne Titmus won her first of two gold medals so far this week in Tokyo, her coach Dean Boxall erupted in celebration. Reactions have ranged from support for his enthusiasm to decrying the gyrations as borderline pornographic, but from either camp, the outburst has become one of the most memorable, talked about, and iconic moments of the Tokyo Games so far.

Trevarthen says that he was compelled to paint the moment after watching the race.

“I watched the end of the race at work and saw Dean going absolutely nuts, it almost gave me goosebumps – the end of the race was thrilling enough for that too!” Trevathen told SwimSwam. “I think his reaction just was so beautifully authentic and an uncontrolled outburst of passion for his athlete. Was just epic! I went home and just thought I had to capture it!”

Trevathen says that he’s basically an Olympic-year-swim-fan, but he grew up with swimmers, including one who was an Olympic medalist, and so has “always admired their dedication.”

The original was sold almost immediately, but he’s now produced 100 numbered and signed prints as well, which you can find in his web shop for $50 each.

This celebration came after Titmus won a much-anticipated matchup with World Record holder Katie Ledecky in the 400 free. Later in the meet, Titmus would add another gold medal via a win in the 200 meter free. Her most recent, race came as the leadoff leg of Australia’s 800 free relay. They won bronze and swam under the World Record, but China (gold) and the U.S. (silver) beat them to the wall.

Titmus will likely finish her meet on Saturday in the women’s 800 free final.

Can’t wait to hang this in my room

Can’t let my kids look at this…

Those are going to sell out quick.

Id rather get a side by side of him when she won the 400….then the 200…then when she laid an egg on the relay.
Where have you been and how are you now.

I’m curious but scared about what the Succulent Chinese Meal and the Dane could be.

An anti lockdown statement As we can no longer have politici-social cartoonists in newspapers any more, this is a way we can keep track of forbidden social comment .

Dean Boxall graduated with highest honors from the Laurie Lawrence Academy of Coaching.