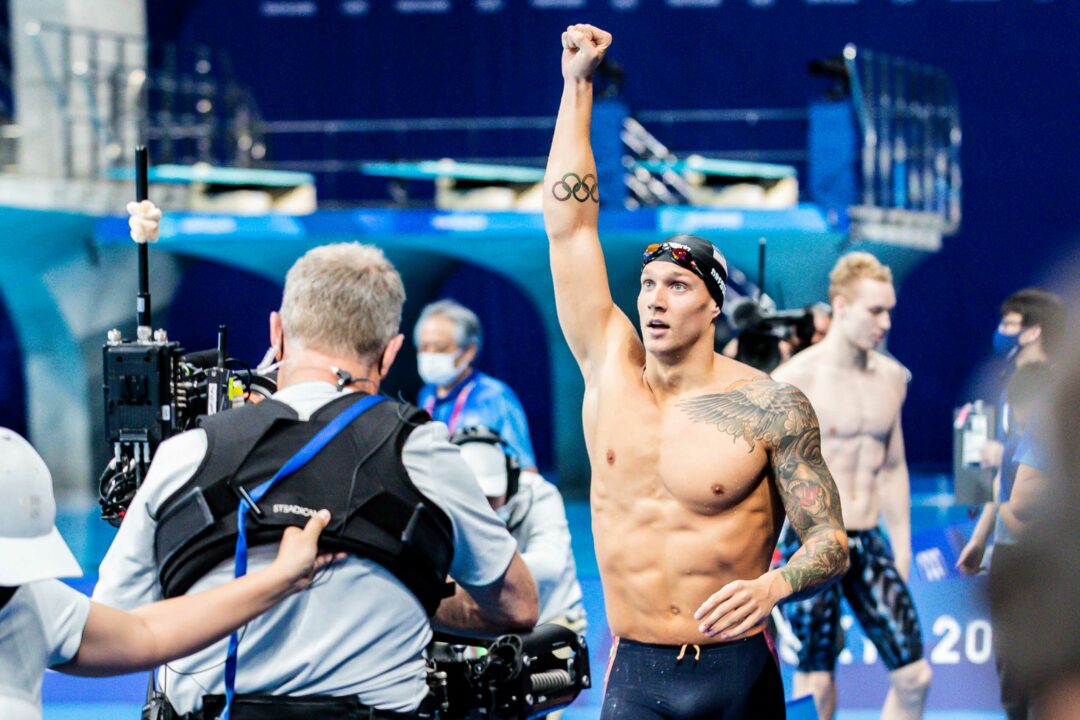 But there’s still value in reviewing the original and expected top storylines to see how they played out. Below, we review our original “8 biggest storylines of swimming at the Tokyo 2020 Olympics.

Verdict: Heading into the Tokyo Games, we knew that Katie Ledecky would face the biggest challenger of her career: 20-year old Australian Ariarne Titmus.

Titmus had previously beaten Ledecky in 2019 when she was suffering from illness, which was marked as Ledecky’s first loss in the event. However, all eyes were on Titmus after she had posted a 3:56.90 400 free at the Australian Trials and nearly broke Ledecky’s 400 free world record. At the Tokyo Games, Titmus improved on her trials time and defeated Ledecky in a time of 3:56.69, narrowly missing Ledecky’s world record of 3:56.46. Ledecky won the silver, finishing in 3:57.36. Ledecky led at 300 with Titmus at her hips, but Titmus had a sensational last 100 meters, including a :28 split on the final leg.

Though Ledecky wasn’t able to get the win, she put up the 2nd fastest 400 free of her career, which is the fastest she’s been in nearly 3 years. Ledecky was not disappointed with her performance.

Ledecky’s performance in Tokyo wasn’t inadequate. Ledecky won her third straight 800 free gold and the inaugural gold medal in the women’s 1500 free. Ledecky also dropped a massive 1:53.76 split while anchoring the women’s 4×200 free relay. That split allowed her to pass Australia’s Leah Neale to secure a silver medal for the USA. The USA women went under the previous world record, but China’s relay won the gold.

Although Ledecky didn’t go undefeated at the Olympics, she still secured 4 medals (2 gold, 2 silver) to reach 10 overall Olympic medals. Ledecky has the most individual gold medals of any US Olympian with 6 individual golds.

2. “DRESSEL WILL BE THE STAR ON THE MEN’S SIDE”

Verdict: Caeleb Dressel continues to demonstrate why he’s referred to as the world’s greatest male swimmer. The 24-year old finished the 2020 Tokyo Olympic Games with five gold medals, two world records, two Olympic records, and also established himself as the third American male swimmer to win three individual gold medals at an Olympic Games, only behind the great Michael Phelps and Mark Spitz.

Dressel won his first individual gold by out-touching a charging Kyle Chalmers by .06 to win the men’s 100 free in an Olympic Record time of 47.02. Next up was the 100 fly, where Dressel established a new World Record (49.45) and beat Hungarian Kristof Milak, who finished in 49.68.

Dressel’s third individual gold medal came in the 50 free (21.07), where he won by a margin of .48 over France’s Florent Manaudou (21.55). His 50 free performance was his second individual Olympic record in Tokyo.

With his five golds in Tokyo, Dressel joins Americans Michael Phelps, Mark Spitz and Matt Biondi, as well as East Germany’s Kristin Otto, as the only swimmers to win five or more gold medals at a single Olympics.

3. “KATINKA HOSSZU’S QUEST FOR GOLD WHILE COACHING HERSELF”

Hosszu finished 5th in the 400 IM and 7th in the 200 IM, which are two events she dominated in Rio, highlighted by her 4:26.36 World Record in the 400 IM. Hosszu also swam the 200 backstroke, but was 20th out of prelims, which wasn’t enough to get her through to the semifinals. Hosszu had previously won a silver medal in Rio in this event after her historic duel with American Maya DiRado.

Katinka has had many recent coaching changes, but she’ll need to find a reliable option as she hopes to qualify for and excel at the 2024 Paris Olympic Games.

Verdict: Kaylee McKeown‘s Olympic debut was nothing short of jaw-dropping. McKeown won the 100 backs in an Olympic record time of 57.47, which was just short of her own world record (57.45) from the Australian Trials. She doubled-up on the backstroke and swept both events, winning the 200 back in 2:04.68. McKeown also swam legs on Australia’s 4×100 medley and mixed medley relays. McKeown swam back on both relays as the Aussies won the 4×100 medley and placed 3rd in the 4×100 mixed medley.

Due to schedule conflicts, she had to drop the 200 IM. However, she was the top seed (2:08.19) heading into Tokyo and was a clear gold-medal favorite. McKeown left her first Olympics as a triple-Olympic champion and 4 medals overall. McKeown can elevate her freestyle to a world-class level, she will be one of the most versatile athletes in the world and will be in contention for more medals at her next Olympics.

Seto’s prelims time would’ve placed 4th in the finals. Of note, Seto stated that he was attempting to conserve energy in the prelims, so we may have seen a much faster time given that his personal best is a 4:06.09.

“I thought I’d finish in 8th place but I misread the time needed to advance,” he said. “At the end, I misread the freestyle pace. It’s a shame because I’m in good shape.”

The 400 IM was Seto’s best chance at winning a gold medal after reigning Olympic champion Kosuke Hagino dropped the 400 IM from his event schedule to focus on his other events. Seto is the reigning world champion in the 400 IM and he won bronze in Rio.

Verdict: The ROC won 5 medals (2 gold, 2 silver, 1 bronze) in Tokyo. Evgeny Rylov swept the backstroke events, Kliment Kolesnikov won silver in the 100 back and bronze in the 100 free, and the ROC men’s 4×200 free relay won silver.

While we expected the ROC to grab a few more medals, specifically from athletes such as Anton Chupkov, Martin Malyutin, Evgeniia Chikunova, and Yuliya Efimova.

The IOC and WADA are allowing Russian athletes to compete under the ROC while serving a four-year doping ban. Athletes under the ROC will not be allowed to wear articles of clothing that have the current Russian flag, and instead had to have their flag rebranded for the Tokyo Games.

7. “AUSTRALIA COULD PUT A DENT IN U.S. MEDAL HAUL”

The biggest upset was Australia’s gold medal in the women’s 4×100 medley relay. Australia had a stacked medley relay that featured World Record Holder/Gold Medalist Kaylee McKeown, Chelsea Hodges, Emma McKeon, and Cate Campbell. The Americans had the lead going into the freestyle leg, but Campbell used her experience and speed to pass the US and win gold for Australia. Australia’s margin of win over the United States was only .13.

While Abbey Weitzeil’s 52.49 split was impressive, Cate Campbell was able to pass by with her 52.11 split. Campbell, now 29, has split much faster in recent competitions. Campbell was 52.52 when she won bronze in Tokyo and has been as fast as 51.0 on a flying start, which was done at the 2018 Commonwealth Games when Australia shattered the world record.

When the US women set the world record in the 4×100 medley relay in Gwangju, Simone Manuel anchored in 51.86. Manuel also set the American Record in the individual 100 freestyle at the same World Championships (52.04) on her way to winning the gold medal. Simone Manuel hasn’t lost a 100 free in a major international competition since the Rio Games and wasn’t given the opportunity to defend her gold medal after missing the US Trials final. The US were stunned in Tokyo and Manuel’s experience could’ve been used in this situation.

8. “CAMPBELL, SJOSTROM LOOKING TO BOUNCE BACK”

Verdict: Cate Campbell was looking for redemption after failing to live up to her own expectations in 2016. Entering Rio, Campbell was the world record holder in the women’s 100 free, but finished 6th in the event at the Olympics. In Tokyo, Campbell finished 3rd in 52.52, which was significantly faster than her time in Rio (53.24). Although Campbell was aiming for her first individual gold medal, she still was able to win an individual bronze medal.

Campbell also won two gold medals as a member of the Australian 4×100 free and medley relays. She had the 2nd fastest split on the 4×100 free relay (52.24) that broke the world record, and she anchored the 4×100 medley relay that charged past the US in the final 50 meters. Campbell has now earned 8 career Olympic medals (4 gold, 1 silver, 3 bronze).

Sarah Sjostrom returned to international competition following her elbow injury. Following the surgery and recovery, she was unable to train butterfly, which is arguably her best stroke. Sjostrom is the current world record holder in both the 50 and 100 fly and was the defending Olympic gold medalist. She resorted to lots of kick and freestyle training. She only fully returned to training in May, a mere two months out from the Games.

The other swimmer that was looking to bounce back was Japan’s Rikako Ikee. Ikee was forced out of the water for over a year after being diagnosed with Leukemia in 2019. Although Ikee only swam relays, it was momentous to have her representing Japan at the Olympics in her home country. Ikee swam on the prelims relays for the women’s 4×100 mixed medley and 4×200 free relay, and also swam in the finals relays for the women’s 4×100 medley relay (57.92 fly split). Her fly split was well off her best time and she’s split 55’s on several occasions. We expect to see Ikee back to the top as we head into Paris 2024.

I’ll try and post this again.
This was McKeon’s second Olympics,not third.
And Campbell’s 52.11 was hardly underwhelming. Not a 51 split but still good.

Totally agree that C1’s time wasn’t underwhelming. She’s 29 and being able to still split that at the end of the meet is pretty impressive in my opinion.

A good relay split from both Abbey and Cate. I personally think that Abbey is one of the best Ametican relay swimmers ever and doesnt get the recognition she deserves. Simone’s 52.96 in the free relay was definitely underwhelming.and Abbey was the right swimmer to.anchor the medley relay. One of my favourite events of the Games. So exciting.

It has been well documented what was going on with Simone…unless you have been living under a rock. And Simone’s 52.96 was still the second fastest split on the 4X100 Free relay. Abbey had the fastest split on that relay, which was good….not great. Until Abbey is swimming 52 lows or 51’s (she has yet to produce) she is not considered the greatest American relay swimmer. And USA relays did suffer without Simone in peak form whether or not people want to admit it.

If Cate and Simone (if she had swum the MR) had both swum their fastest ever freestyle splits the result of this medley relay would still have been the same. I said Abbey was ONE.of the best ….. Simone has lost the lead as the anchor on a number of occasions. Simone is a great swimmer and hope she comes back to her best … always great to see athletes performing well.