From a hydrogen-fueled Olympic Flame to an Opening Ceremony calling for peace, the upcoming Tokyo 2020 Games will be ones to remember. 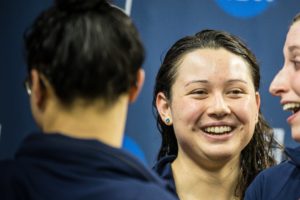 Hong Kong’s Siobhan Haughey may indeed be smiling big if she can muster up some hardware in Tokyo. Her nation just upped the medal prize amounts big time.

Thrower Who Demonstrated at Pan Ams on New IOC Rules: ‘It is a Form of Control’

Gwen Barry, who raised her fist on the podium at Pan Ams last summer, responded to the IOC’s new guidelines surrounding Rule 50.

The IOC Athletes Commission released guidelines pertaining to Rule 50 of the charter in order to avoid protests, political or otherwise, at the 2020 Olympics.

Former World Record holder Ippei Watanabe is gunning to get his mark back in the 200 breaststroke, giving a numerical value to the time he wants to hit.

Did You Know: The Olympics Used to Award Medals for Art?

In the first-half of the 20th century, Olympic medals were awarded in 5 different disciplines of art.

The 2019 double gold medalist in Gwangju, Daiya Seto, has been nominated as Japan’s Olympic swim team captain for his home nation-hosted Games.

From a smoke-free Games to bouquets produced in quake-hit areas, here’s the latest on that and much more in this decade’s last Olympic Update.