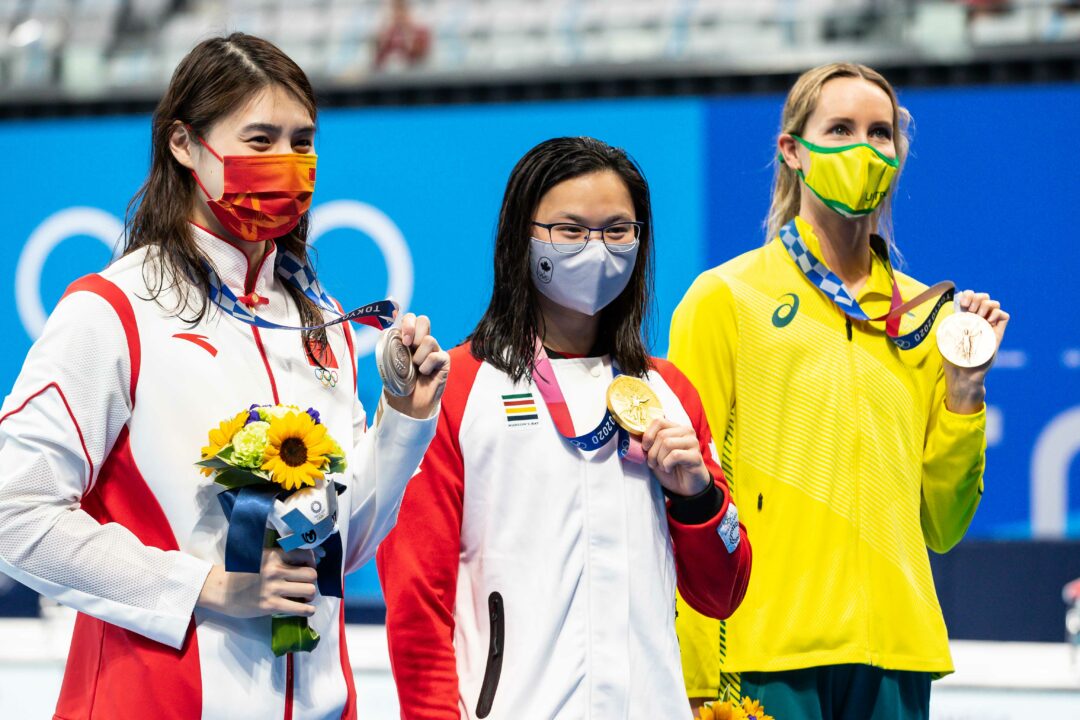 3-time Olympic medalist and Tokyo 2020 champion in the women's 100 butterfly Maggie MacNeil has been honoured for her accomplishments. Archive photo via Jack Spitser/Spitser Photography

The Association of National Olympic Committees held their Tokyo 2020 award ceremony over the weekend to honour some of the top athletes who competed at the Olympics. The committee gave out 9 main awards including the Best Female Athlete of Tokyo award, which went to Canadian swimmer Maggie MacNeil.

In addition to gold in the 100 butterfly, MacNeil helped her fellow Canadians to a silver medal in the 4×100 freestyle relay along with a bronze in the 4×100 medley. She, Kayla Sanchez, Rebecca Smith, and Penny Oleksiak hit a 3:32.78 in the freestyle relay to trail the world record-breaking Australians by just over 3 seconds.

MacNeil was one of three Canadian women to win three medals at the Tokyo Games. Fellow medley relay medalists Penny Oleksiak and Kylie Masse also stood on three podiums as Oleksiak took 200 freestyle silver and 4×100 freestyle bronze while Masse earned silver in both the 100 and 200 backstrokes.

MacNeil was honored at the ANOC ceremony in Greece alongside her fellow award winners including Eliud Kipchoge, the Kenyan runner who won gold in the marathon in Tokyo.

This result cannot be based on overall athletic performance. I have seen no article mention the voting criteria, but it must be something like “athlete who best exemplifies the ‘Olympic Spirit’ while also having a solid performance”.

As other posters have mentioned, she’s not even in the top 5 female swimming performers. I would give the best athletic performance award overall to Sifan Hassan. Slight edge over McKeon. What Hassan did on the track has never been done before and the way she did it in the Tokyo heat was just insane. McKeon’s accomplishment was also unique, but owed partly to the new relat event, fast real partners and may be slightly behind Ledecky’s 2016 games as the best female… Read more »

Didn’t she win MVP for NCAA when Madden won 3 individual events and a relay also?

i wonder if how competitive the events were played a role in this? Wattel, who swam a 56.27 that would’ve won silver in Rio/London and gold in Beijing had to settle for a 6th place finish in Tokyo.

100 back and 100 free were at least as competitive as 100 fly and the winners both won multiple individual gold as well as relay gold.

yeah the 100 free OR has been broken in every quad since 1992 and there were 5 people under the 2016 mark in the 2020 final. not to mention 7th place would’ve been outright bronze in rio.

It would be very disappointing if the time that won gold 13 years ago was still winning medals.

Zhang YuFei also had another silver medley in the mixed relay

Aside from that it’s a very thorough analysis. Well done!

There’s a lot of individual women’s medalist so it’ll always up to debate. Mckeon aside, there’s also sifan hassan and elaine thompson-herah to name if we want to compare and arguably they are even more outstanding than mckeon but from what I see, the awards are also spreaded throughout all continent and sports. The great Kipchoge from africa/athletic. NZ recipient is rugby seven team and they represent oceania. Japan’s baseball team for asia. The multiple athlete awards are both from europe and they’re from track cycling and fencing. And maggie seems to represent America’s Americas. Beside her, I think the standout are athing mu and elaine but then again there’s already athletic from kipchoge. Swimming is one of the main… Read more »

I assumed this was a Canadian award and thought “oh awesome for her”. Once I realised it was overall I was so confused.

Maggie is great. I love her. But literally 8 (from the top of my head) women won multiple golds, with 5 of them winning multiple individual golds. It seems odd to say the best overall athlete was the one who only got a single individual medal.

Might there be more than just medal count considered in best athletes? What makes great athletes? I’d argue that character and sportsmanship are nearly as important of factors.

McKeon was racing in Doha this weekend, the aussies couldn’t come prob cuz of quarantine restrictions, and MacNeil broke an Americas record, in which ledecky did not. So seems pretty valid to me

This is so random.

I meat for them to return to Australia afterwards

Hard not to cheer for Maggie, but this does seem a bit random….

Truth.
(Still remember when Maggie chose to swim at Junior Pan pacs in 2018 instead of senior pan pacs because she’d get to race more I think. )
McKeon deserved this award though.

Seems like Junior PP 2018 was a great development decision as she ended up being Olympic champ 3 years later!

And she got to go Fiji.