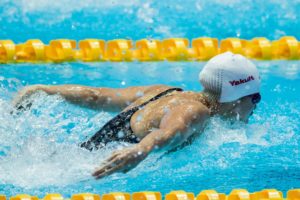 Maggie MacNeil’s standout year — both on the world stage and in the NCAA — earns her our Swammy for Canadian Female Swimmer of the Year.

She is the Canadian Record Holder in the 100M Backstroke.

Masse wins the bronze medal tied with Chinese swimmer Fu Yuanhui of China in the women’s 100 M Bacstroke with a time of 58.76, juts .01 out of second place.

Day three of World Championships Masse took down the World Record in women’s 100 back final. Masse surged through the back half to finish in 58.10, taking down Olympic silver medalist Kathleen Baker (58.58) of the USA and 2015 World Champion Emily Seebohm (58.59) of Australia.

200m backstroke semi-final, day six: Masse broke the Canadian National Record with a 2:05.97. The long-burning torch in Canadian women’s 200m backstroke has now been fully passed to Masse. After breaking the World Record and winning gold in the 100 earlier in the meet, Maase has the Canadian Record in the 200m back by almost a second. Masse’s 2:05.97 in the semi-final broke Hilary Caldwell’s 2:06.80 from the 2013 World Championships, where she took bronze. In the finals of the 200m backstroke, did not improve her semifinal swim, placing fifth with a time of 2:07.04.

Masse won the gold in the 100 back at the Commonwealth Games, with a meet record time of 58.63. She also picked up a gold medal and set a Games record in the 200 back (2:05.98), just one hundredth of a second off her personal best.

Shortly after Kathleen Baker broke her world record, the Canadian star went head-to-head with the American in Tokyo, and came out on top. Masse touched for gold in the 100 back on day 2 in a time of 58.61.

On June 11, 2019, Kylie Masse was announced as a member of the Cali Condors ISL team, headed by GM Jason Lezak

Heading into the final of the 100 back as the top seed, Masse successfully defended her world title, touching for first in a time of 58.60. Masse followed that up with a bronze in the 200 back, touching for 3rd at 2:06.62.

Masse finished her meet in the 4×100 medley relay, where she led off in 59.12 to help Canada earn yet another medal, this time bronze.