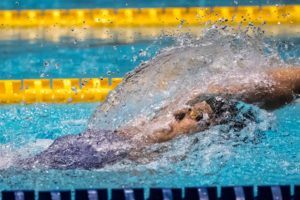 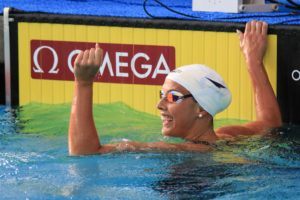 Look out world, American Kathleen Baker is back to form, firing off one of the fastest 200m back times of the Olympian’s carrer. 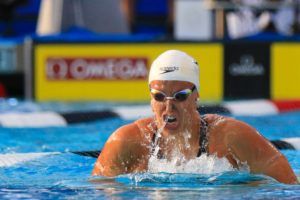 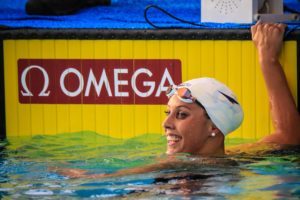 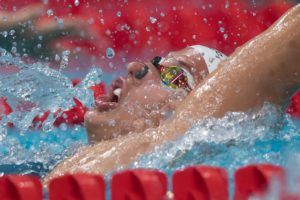 The young North Carolinian’s 2013 performances earned her a spot on the United States’ 2013 FINA World Championships team. At the Championships in Dubai Baker won silver medals in the 100 meter back (1:01.18) and 200 meter back (2:10.68) as well as bronze medals as part of the United States’ mixed 400 meter medley relay and the women’s 400 medley relay.

After an extremely successful high school career Baker was the third-ranked recruit in the nation according to SwimSwam. After considering schools such as Texas, Georgia and Tennessee she committed to the University of California, Berkeley in 2014. 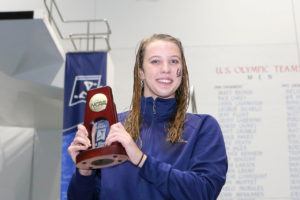 Kathleen Baker with her 200 back first-place trophy.

In the first event of the Championships, Baker led her Cal 800 Free Relay team to a second place finishing, leading off with a 1:42.66. Baker started her individual campaign by winning the 200IM, breaking the pool record and just missing the NCAA, US Open, Meet and American record by .04, with a time of 1:51.69. In the 200 Medley Relay, Baker swam the lead off backstroke leg splitting a 23.62 to help Cal claim the Gold. Baker added the 200 back to her win column finishing in 1:48.44, 0.6 seconds ahead of 2nd place swimmer Alexia Zevnik of NC State. Baker swam the second leg of Cal’s third place 400 Free Relay team, splitting 47.42. Baker struck gold again in the 100y Backstroke with the time of 49.84, just off her morning Meet and Pool Record swim of 49.80.

Day 4 of the 2018 Women’s Pac-12 Championships in Federal Way, Washington saw reigning NCAA champion Kathleen Baker of Cal step up for one of her signature events: the 200 back. Baker turned in a new best time, taking down her own Pac-12 Meet Record by 6 hundredths as she hit the wall in 1:48.27. She finished over a second ahead of the field, as Stanford’s Janet Hu, who narrowly topped Baker in the 100 back, took 2nd tonight in 1:49.49.

Baker helped the Bears take the second place as she competed in her usual line up. She got second in the 200 IM with a new best time of 1:51.25 and third in the 100 backstroke with a 50.77. On the last day, she won the 200 backstroke with a new American Record time of 1:47.30. She was also a part of four relays where Cal gained some valuable points after finishing second in the 200 and 400 medley relays and third in the 800 freestyle and 400 medley relays.

After setting a world record in the 100 backstroke and also winning gold in the 200 back and 200 IM at the U.S. Nationals, Baker announced that she would be forgoing her senior year at Cal to turn pro. In the announcement, Baker said that being able to better handle the effects of Crohn’s disease factored into her decision.

“I am excited to announce that I will become a professional athlete while finishing my degree at the University of California, Berkeley,” Baker said. “This decision will allow me to best manage my overall health and Crohn’s disease, as well as take advantage of opportunities outside the pool. College swimming has given me friends and memories that I will cherish forever. Teri and this team have helped me grow athletically, academically and personally, and while I’m looking forward to this next chapter, I will always be a Cal Bear!”

Capping off a whirlwind two weeks, which included a new World Record of 58.00 in the 100 meter backstroke then announcing that she would forgo her final year of NCAA eligibility and turn pro, Kathleen signed her first suit partnership with Speedo. 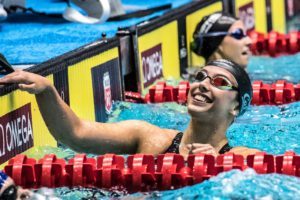 Baker had a huge season in 2014, making it onto the Short Course Worlds and Pan Pacs rosters. At the Phillips 66 Nationals in 2014 Baker finished 2nd in the 200-meter back, effectively being named to the Pan Pacs roster where she went on to finish just outside the final, finishing ninth overall.

In the same season Baker made the Short Course World Championship Team, which were held in Doha. She competed individually in the backstroke events, and was also a member of the U.S. team’s freestyle relays. Baker helped the U.S. squad win a silver medal in the 200 free relay, and individually she finished 6th in the 100 backstroke and 11th in the 200 backstroke.

Her performances got her on the 2015 World Championships roster in the 100 backstroke.

In the 100m Backstroke Baker finished second to Olivia Smoliga with a time of 59.29, adding her to the Olympic Roster. 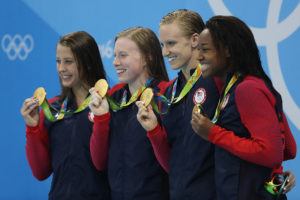 Kathleen Baker finished second to the Iron Lady, Katinka Hosszu, to win the silver medal in the 100M Backstroke with a time of 58.75 just one one hundredth of a second of third places finishers (a dead tie), Kylie Masse of Canada, and Fu Yuanhui of China.

Baker was also the backstroke leg of the women’s 4×100 medley relay that won gold on the final night of the meet.

Baker swam a 2:06.38 to win the 200M Back and solidify her spot on the US team. She then finished second in the 50M back, and finished out the backstroke winning the 100M with a time of 58.57, setting a new US Open Record and LC National Meet Record. 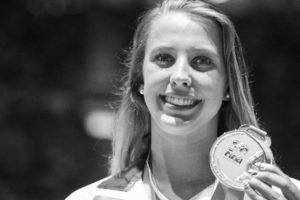 Day three, in the final of the 100m backstroke, Baker was just .01 off of her own personal best time to claim the silver behind Kylie Masse who broke the World Record (58.10). Baker swam a 58.58.

Day four of competition Baker took down Natalie Coughlin‘s 50 back American record during the 50m backstroke semifinals. Swimming in heat two, Baker popped a 27.48, much faster than her 27.94 from prelims. That is just .03 ahead of Coughlin’s old record, a 27.51 from the 2015 Arena Pro Swim Series – Santa Clara.

Day seven Baker won bronze in the 200m backstroke final.  Baker swam a 2:06.48 to make the podium in her second individual medal of the meet.

Day eight in the final of the 4×100 medley relay, Team USA’s Baker, Lilly King, Kelsi Worrell, and Simone Manuel teamed up to set a World Record. Baker got the ball rolling on the backstroke split with a personal best 58.54 on the backstroke leg, marking the 5th fastest 100 back ever done by an American. King (1:04.48) kept it close as she battled once again down the stretch with Russia’s Yuliya Efimova (1:04.03), but the Russians took the lead through the halfway mark. On the fly leg, Worrell pulled the USA into the lead with her 56.30, making way for 100 free champ Manuel (52.23) to finish things off as they finished in 3:51.55. That took a half second off the former World Record, which stood as a 3:52.05 done by the USA in 2012.

After starting the meet off with a tie in the 200 back with Regan Smith (2:06.43), Baker won the 100 backstroke title in a world record time of 58.00, also setting a new American standard and U.S. Open mark. She shaved more than a second off her prelim time of 59.27. Baker made another note in the records book, winning gold in the 200 IM in a U.S. Open record time of 2:08.32, more than three and a half seconds off her prelim time.

Baker started things off in the 400 mixed medley relay, leading off team USA in 59.29 to a bronze medal. On day 2, she got even closer to her WR, racing in the individual 100 backstroke and touching for bronze in 58.83. After missing the A-final in the 200 IM and scratching out of the B-final on day 3, Kathleen had a big finish in the tank, racing her way to individual gold in the 200 back in a time of 2:06.14. She finished off her pan pacs performance with a silver in the women’s 4×100 medley relay, leading off in a time of 59.41.

After announcing that she would forego her senior season of NCAA eligibility, Baker traveled to Europe for the 2nd cluster of the World Cup series in Eindhoven and Budapest. In Eindhoven, Baker broke the American record in the 100 back by .01 (55.91), formerly held by Courtney Bartholomew from the 2015 Duel in the Pool. At the 2nd meet of the cluster in Budapest, Baker continued her AR streak and tied the record in the 100 IM (58.02) which was held by Team Elite teammate Katie Meili.

Baker finished the year with 4 more international medals. She earned a silver in the 200 backstroke (2:00.79), just behind American teammate Lisa Bratton (2:00.71), as well as individual bronze in the 200 IM (2:05.54). Baker swam prelims of both American medley relays, which went on to win gold in both finals, giving Baker 2 more golds to her haul. 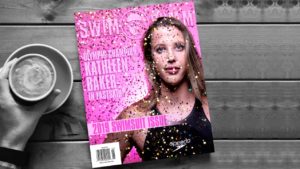 In March, 2019, Kathleen Baker appeared on the cover of SwimSwam Magazine for the first time. The cover was glittery and pink, and in the cover story Baker talks about focusing on the little things after making the “big leap” into professional swimming.

On June 18, 2019, Kathleen Baker was announced as a member of the LA Current ISL team, headed by GM Lenny Krayzelburg.