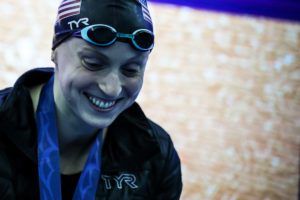 Here it is: our totally, utterly, completely indisputable list of the best swimmers of the last decade. We’re sure you will all 100% agree. 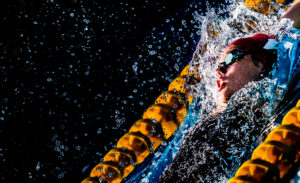 Lily King, a breaststroke specialist from Evansville, Indiana was born on February 10 1997. King started swimming at seven-years-old because she said it was the only thing to calm her down.

The self proclaimed Mcdonalds enthusiast comes from a sporting family. Her father, Mark was a track and cross country runner at Indiana State and her mother Ginny swam for Eastern Kentucky University and Illinois State University.

At 17-years-old, King finished sixth at the 2014 US Nationals and earned her first call up for the national team. She continued to climb the breaststroke ranks and burst on to the collegiate scene as a freshman at Indiana University.

King has been on the USA swimming radar since a freshman at FJ Reitz High School and a member of Newburgh Sea Creatures. She won her first junior national title in the 100-yard breaststroke age 16 at the US Winter Junior Nationals. Her time of 59.67 was a new National Age Group record.

After finishing 6th at the US nationals, King put on the Team USA uniform for the first time in her career at the Junior Pan Pacs. Her first international medal came in her signature event, 100-meter breaststroke. She took gold in a new meet record of 1:07.98. King and her USA teammates picked up another gold in the 4×100-meter medley relay in another meet record.

King took silver at US nationals, placing her on the National Team for a second consecutive year. Prior to her first semester on Indiana University campus, King competed at the World University Games. In South Korea, she picked up silver in the 100-meter breaststroke and bronze in the 4×100 medley relay. King also raced in 50-meter breaststroke, finishing 8th in the final.

Staying close to home, King began her collegiate career in her home state of Indiana as a Hoosier.

King stunned the collegiate swimming world at her first NCAA appearance. In the 100-yard breaststroke, she dived under the 57 second mark for the first time in history. Having already broken the NCAA, American and US Open records with a 57.15 in the prelims, she came back even faster in the finals to take the title in 56.85.

Her 200-yard breaststroke was nothing short of amazing either, as she sent records flying again. King managed to sweep all the 200 yard breaststroke records by almost half a second. She took gold almost three seconds ahead of her Hoosier teammate in 2nd.

King won the 100 breaststroke setting a Meet Record in the finals with a time of 56.71. She finished almost 1.5 seconds ahead of the second place competitor, Lindsey Horejsi. She helped Indian swim to a fifth place finish in the 4×100 Medley Relay, splitting a 56.17 on the breaststroke. In the 4×50 Medley Relay, King clocked a 25.62 on the breaststroke leg to help Indian to a fourth place finish. In the 200 Breast, King once again stood on top if the medal stand, setting NCAA, Meet, American, US Open and Pool Records with a time of 2:03.18.

King continued her explosive rise to the top by winning the 100M Breaststroke and becoming another first time Olympian. Her time of 1:05.20 puts her among the top in the World  this year and surely makes her a true contender for gold.

King added the 200m Breaststroke to her Olympic swims by winning the event with a time of 2:24.08, just .31 seconds ahead of second place finisher, Molly Hannis, another first time Olympian. 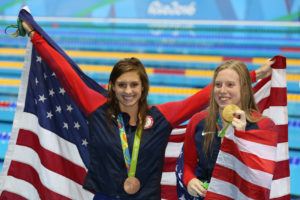 The 19 year old made a bold statement in the semifinals of the 100M Breaststroke to take top seed for the finals just two hundredths of a second over Russian Yulia Efimova.

Gold Medal swim in the women’s 100M Breaststroke by Lilly King, breaking the Olympic Record with a time of 1:04.93. She finished 63 one hundredths of a second ahead of second place finisher Yulia Efimova of Russia and 76one hundredths ahead of fellow American and bronze medal winner, Katie Meili.

King won the 20om breast (2:21.83) just beating second place finisher Bethany Galat. King also won the 50m Breast setting a new US Open Record and LC National Meet Record with a time of 29.66. King then made it a breaststroke sweep, winning the 100m finals with a time of 1:04.95 setting a new meet record in the process. King will represent the US in all three events at the World Championships in Budapest later this summer. 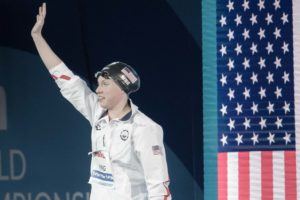 Day three of competition brought the highly anticipated showdown between King and Yuliya Efimova in the women’s 100 breaststroke, and it did not disappoint the crowd. King was out like a light, splitting 29.80 at the 50, and she surged through the 2nd 50 with the fastest back half of the field, splitting a 34.33 to clip the World Record with a 1:04.13. The former record stood at a 1:04.35 done by Ruta Meilutyte in 2009.

Day four King picked up another relay gold medal and World Record when she combined with Caeleb Dressel, Matt Grevers and Simone Manuel in the 4×100 mixed medley relay.  She split 1:04.15. Remarkably, King held her ground despite being the only female breaststroke leg in the field.

Day seven in the semi-final of the 50m breaststroke King broke the American record by .06, swimming a 29.60.

Day eight in the final of the 50m breaststroke King shaves more time, setting a new World Record, 29.40, and topping . Yulia Efimova for the gold. Efimova took the silver in 29.57. Katie Meili won bronze in 29.99. 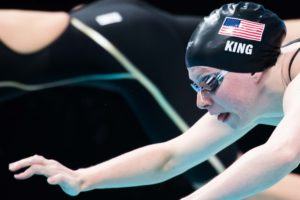 Day eight in the final of the 4×100 medley relay, Team USA’s Lilly King, Kathleen Baker, Kelsi Worrell, and Simone Manuel teamed up to set a World Record. Baker got the ball rolling on the backstroke split with a personal best 58.54 on the backstroke leg, marking the 5th fastest 100 back ever done by an American. King (1:04.48) kept it close as she battled once again down the stretch with Russia’s Yuliya Efimova (1:04.03), but the Russians took the lead through the halfway mark. On the fly leg, Worrell pulled the USA into the lead with her 56.30, making way for 100 free champ Manuel (52.23) to finish things off as they finished in 3:51.55. That took a half second off the former World Record, which stood as a 3:52.05 done by the USA in 2012.

King won the 50 breaststroke (29.82) and 100 breaststroke (1:05.36) titles at the Phillips 66 National Championships, while placing 5th in the 200 breast. Notably, King admitted that she had been putting in hard training before this meet, and was planning on saving her full rest for the Pan Pac championships.

After Thursday’s foreshadowing with the fastest 100 yard breaststroke on a relay split in history, Indiana senior Lilly King fulfilled the prophecy with a new NCAA, U.S. Open, and American Record in Friday’s event final. Her time of 55.88 is the new fastest-ever in the event, breaking her own record of 56.25 set at NCAAs last season.

Removing reaction times, King’s individual swim was even better than her relay split by an off-the-blocks margin of .28 seconds.

King improved both her front-half and her back-half in the new record-setting swim by similar margins. She’s managed to drop time from Big Tens to NCAAs in this event in 2 of the previous 3 seasons.

On June 11, 2019, Lilly King was announced as a member of the Cali Condors ISL team, headed by GM Jason Lezak

King successfully defended her world title in the 100 breast, touching 1st in a time of 1:04.93, over half a second ahead of 2nd place Yulia Efimova. Lilly was out first at the 50, and off the turn Yulia was gaining a lot of ground on King, but over the final 15 meters King pulled away for the victory.

After being DQ’ed in the prelims of the 200 breast, King was back in the 50 breast on the last day of competition, successfully defending her world title in a time of 29.84. King finished her schedule in the 4×100 medley relay, splitting 1:04.81 to help USA to break their own world record and earn gold.