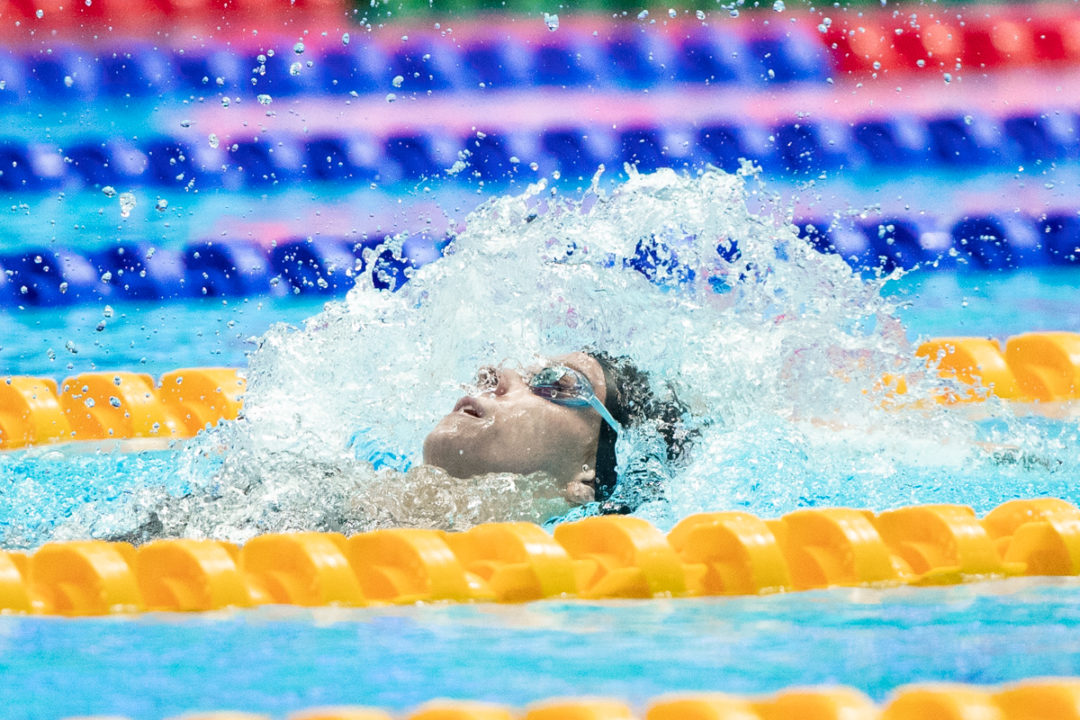 Swimming the lead-off leg of the women’s 4 x 100 medley relay Sunday night at the 2019 FINA World Championships, American Regan Smith clocked a new World Record in the women’s 100 backstroke with a 57.57. The American team of Smith, Lilly King, Kelsi Dahlia, and Simone Manuel won the gold medal and set a new World Record women’s 4 x 100 medley relay at 3:50.40, the final race of the competition.

Smith’s was the only swimmer to go under 59 seconds on the lead-off leg. Australia’s Minna Atherton turned in the 2nd-fastest split with 59.06, and Canada’s Kylie Masse the 3rd-fastest with a 59.12.

Smith’s time surpasses the previous World Record of 58.00 set by U.S. teammate Kathleen Baker at the 2018 U.S. National Championships. Before today, Smith’s best time and former World Junior Record in the 100 backstroke was 58.45, registered in June at the Counsilman Classic.

Smith did not swim the individual 100 backstroke at the 2019 World Championship. Instead, the United States was represented by Kathleen Baker and Olivia Smoliga. Without Smith, gold went to Canada’s Kylie Masse in 58.60, silver to Australia’s Minna Atherton in 58.85, and bronze to Smoliga in 58.91. Baker finished in a tie for 6th in 59.56.

On Saturday, Smith won the 200 backstroke in 2:03.69, a full 2.57 seconds ahead of silver medalist Kaylee McKeown from Australia, whom she has previously exchanged the World Junior Record in the 200 backstroke with since the 2017 World Championships. Canadian Kylie Masse won bronze in 2:06.62, just ahead of Italian Margherita Panziera of Italy, who hit the all 4th in 2:06.67.

Smith’s splits in both the semifinals and the finals of the 200 backstroke were aggressive: In the semifinals when she  clocked an overall time of 2:03.35, the new World Record, Smith flipped at 100 meters at 1:00.37. In the finals, Smith rounded the 100-meter turn in 59.45, a time that would have qualified her 7th for finals in the 100 back and placed 6th overall in the final.

With the 2019 World Championships finished, swimmers in the United States will reset and focus in on the lead-up to the 2020 U.S. Olympic Trials in Omaha next June, where Smith will undoubtedly be the favorite for the first Olympic berth in the 100 and 200 backstrokes, and potentially much more.

SHE IS AMAZING!
Congrats to Regan on your fantastic meet!
The reign is just beginning.
For those who follow her develoment since she’s 10 it’s not a surprise at all.
Next year olympic golds in the 100 back/200 back/4X200 free relay/4X100 mixed medley relay/4X100 medley relay. And honestly she could win the 200 fly too. There’s no conflict with another of her individual events. The only concern is that the 200 fly final is just before the 4X200 free relay final in the same session. Maybe it would be a risk to put her in the relay after a grueling 200 fly if USA wants to beat Australia. But same question about Katie McLaughlin if she… Read more »

She going to win the 200 free to!! Watch I have a feel she’ll break pelligrinis world record

I’ve never been to excited about nationals After world champs because the best swimmers are already done, but this year I’m more curious with what regan can do in other events and if she can be a asset to the other relays like missy franklin (4×100 and 4×200) that would give her 5 events total, I would love to see her beat Taylor rucks times in the freestyle (they had a nice rivalry at the 2017 world jrs Switching world jr records between them in the 100 back) I would love to see regan put up times at 52.7 and 1:54:4 in the frees would be a huge boost for the americans

The Swim That Broke SwimSwam

I’m probably over-simplifying, but think it’s generally based on performance at 2018 Nationals. Smith was 3rd in the 100 back last summer to Baker and Smoliga. She and Baker tied for the 200 back win.

So baker kept the record exactly a year

I’m not sure about the Olympics but I think World Champs would be awesome if everyone in the top 10 for the 2 years between meets got an auto invite. Swimming and Track seem to be the only sports that put Nation above competition.

Phoebe Bacon went 56.6 in SCM this morning at a summer league meet (MCSL all stars) with no starting blocks (legs only).

Careful now, you don’t want to create a meme.

That’s huge. But after SCY swims this winter I am not surprised at all. Congrats Regan.