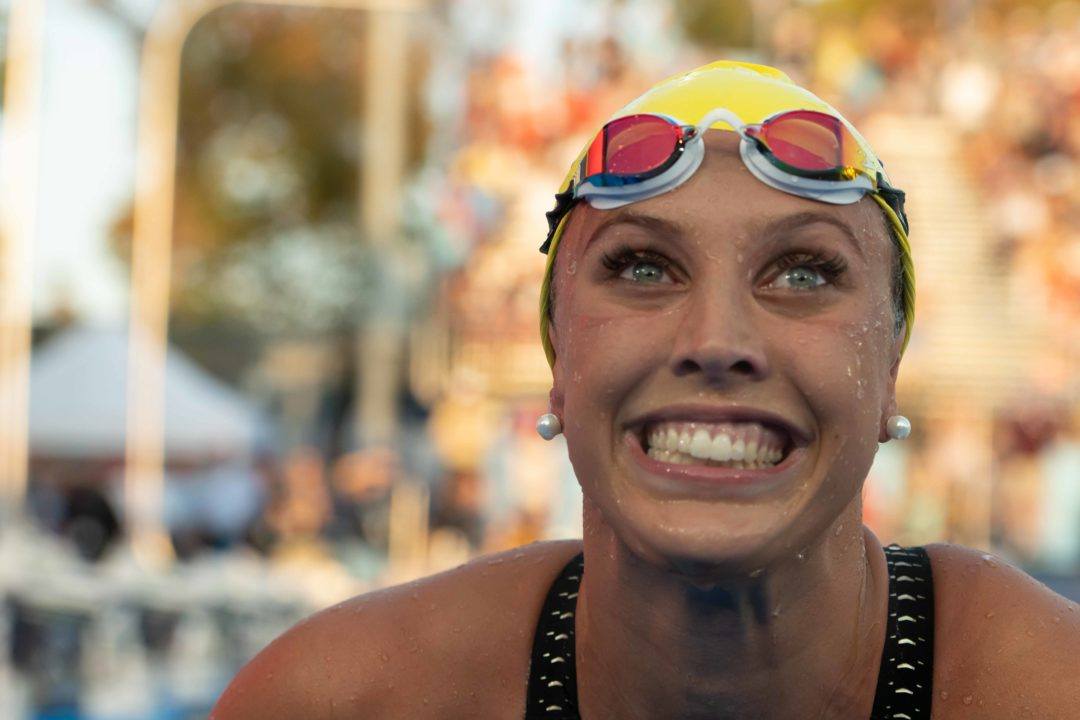 Baker dropped over half a second to go 58.00. Current photo via Mike Lewis/Ola Vista Photography

Cal’s Kathleen Baker took down the world record in the 100 back Saturday night in finals at the 2018 Phillips 66 National Championships.

Baker’s record came entirely from her stellar first 50. While Baker took only a tenth off of Masse’s previous world record, her first split was over six tenths faster than Masse’s was, and Baker actually closed just over half a second slower.

Congrats Miss Baker! Unexpected, at least for me. So the surprise is much better.

That is the beauty of this meet in contrast to Canadian trials that served basically same purposes but was extremely boring. Fast and full of surprises. Maybe there is indeed something in this approach to selection process for world championships. Swimmers have two meets and can optimize for themselves where to perform/peak.

Swim of the meet! Unless we see a crazy WR on the last day. Congrats to her.

Baker VS Masse is going to be a great race at pan pacs hopefully we’ll see both of these ladies get under 58. It’ll be interesting to see them race head to head because Baker likes to take it out and Masse likes to back end. Which will keep it exciting right to the finish

I wouldn’t be surprised if they both go under 58. But that’s always how it seems to work. All it takes is for one person to finally break a super suit world record, and then multiple swimmers start to do it.

Take that Canada. All do respect though Kylie Masse is an amazing swimmer will be fun to see these two race going into Tokyo

Amazing performance! This is going to be an incredible event at Pan Pacs!

I NEED A RACE VIDEO PLEASE I FORGOT TO RECORD FINALS

USASWIMMING YouTube channel has everything. They uploaded the video of each race only 15 minutes after the race finished.

This just might be the world’s fastest comeback She was being written off with all the young guns coming up and also being written off as a has been at 21 for one whole day. Sure glad We stayed up for the east coast video delay NBC/ Olympic Channel I guess it is better than nothing.

Kathleen Baker already qualified for the 2018 Pan Pacs in the women’s 200 m backstroke.

I remember a username Bobo Gigi said Baker was from 20th century, what with the young guns coming up.

sometimes he gets confused in his predictions LOL

Actually 5 of 14 Ledecky’s world records were made on US soil.