What Could Regan Smith’s 2020 Olympic Trials Lineup Look Like? 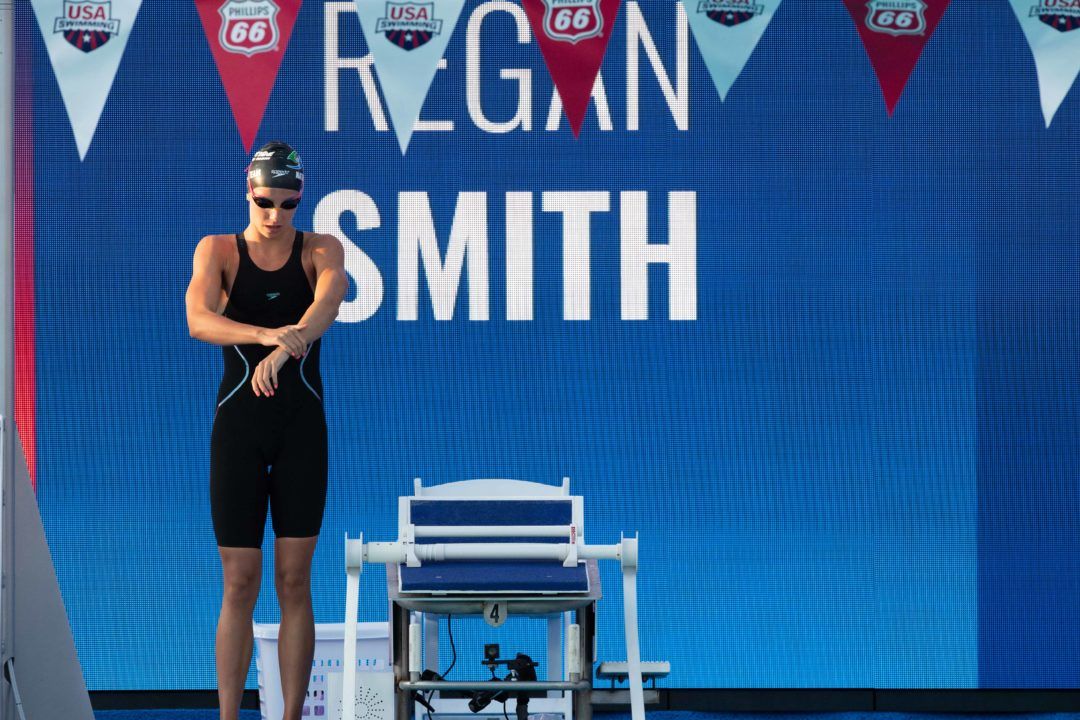 The backstrokes are all but guaranteed to be part of Smith's 2020 OTs lineup, but what else could she make the US team in? Archive photo via Mike Lewis/Ola Vista Photography

An age group phenom and the 200-yard backstroke American record-holder, Regan Smith was already a huge name in the United States. This week, she made her introduction to the world with her world record in the 200-meter backstroke semifinals at Worlds this week. Her time of 2:03.35 blew past the 2012 WR set in London when Missy Franklin, one of the best American swimmers of all time, won Olympic gold in 2:04.06. Smith followed that with another huge swim at 2:03.69 (off of an absurd 59.45 lead 100) to win the gold by 2.57 seconds in Gwangju.

Smith only qualified for the World Championships in the 200 back at the 2018 US Nationals, having placed third in the 100 back, her second-best event, behind Kathleen Baker and Olivia Smoliga. While it’s anticipated that she might get a chance to race the finals of the 4×100 medley relay as the backstroke leg, Smith is indubitably the real deal right now despite only getting a crack at two of her events.

First, let’s check out her times from the 2017-18 short course season, and compare them to how they translated to summer of 2018.

Now, let’s look at the 2018-19 SCY season, and how that moved into what has been the best long course season of her life (even considering she’s only done one event fully rested in LCM this calendar year).

Regan hit lifetime bests in the 2018-19 season in all of the above events in yards. She briefly held the 100 back American record with her 49.66 from the spring before Beata Nelson re-claimed it at NCAAs, while Smith’s massive effort in the 200 back still holds as the American record. Her fly came down by about 1.1 seconds in the 100, and by over two seconds in the 200. She also made huge leaps in the 200/500 free, and a considerable improvement in the 100 free, too.

This year, she’s obviously destroyed her 200 back time– she has improved it by more than THREE seconds after already being at world-class speed; her best before 2019, 2:06.43, would’ve gotten silver in the 200 back final in Gwangju, less than two-tenths behind gold. Her time of 59.45 at the feet in the first 100 of her 200 back tonight was absurd, nearly a second quicker than she went out when she set the WR in semis, and it was a full second faster than previous WR-holder Missy Franklin took her race out in 2012. The 59.45 would’ve also made the 100 back final at this meet.

Meanwhile, in 2019, Smith has already gone lifetime bests in the 100 back (by over three-tenths), the 100 fly (by .07), the 100 free (by eight-tenths), the 200 free (by more than three seconds), and the 400 free (by more than four seconds). All of those best times came from in-season meets, and we know what kind of form she’s in now. What would she be able to do in all of these events if she were to swim them this week? We’ll get an answer, most likely, in the 100 back in that medley relay, but we’ll have to wait and see on her other events.

With her best times from 2019 (and considering her 2:07.42 200 fly from last year), Smith is in the Olympic team conversation for both backstrokes (the favorite in both, at this point), both butterflies (probably more so the 200, but she’s made huge drops in SCY in fly this last season in both), and as for freestyle, at least the 4×200 free relay.

Below is the 2020 US Olympic Trials schedule. We’ve gone ahead and bolded all of the events that Smith may enter in addition to the expected 100/200 back.

Based on this, there is one session where she’d potentially have a triple (night two). The 400 free is perhaps the event she’s least-focused on in this back/fly/free slate, and it wouldn’t be a guarantee that she’d even final in it. Other than that, she could feasibly get through this entire week without more than a double. That said, were she to qualify for Tokyo in all of these events, some of those doubles could become triples due to relay needs (besides the 200 free and/or 100 free, if she were to qualify relay-only and thus wouldn’t have to deal with the individual event again).

Considering her backstrokes are chief, we can keep those in. The 100 fly is the least-conflicting event with anything else; she’d get to do those semifinals without any other event the first night of Trials, and the final is at the opposite end of the night two program from the 100 back semifinals.

Of course, the conflicts in this potential schedule work off of the assumption that Smith would make it to the next round (semis, or finals) in all events. When looking exclusively at prelims, and ignoring the 400 free, she’d only have one event for each morning that she’s racing. So, she could simply do all of the prelims of these races, see how they go, and decide if she wants to go after that event through to semis and the final.

Taking out the freestyle altogether, the 100/200 back and 100/200 fly event lineup looks the most doable for her; the only time she’d have to double up at night would be night two, when she’d be still very fresh, and both races would be 100’s and at opposite ends of the lineup.

We don’t have any reason to doubt that the teenager Smith is able to pull tight doubles; she broke the American records in both backstrokes in yards this March about an hour apart. Having been 1:58-mid during the spring this year, 1:56 feels like a safe bet for what she might do fully rested, especially considering her backstroke at the 200 distance is already as insanely fast as it is, and that would have a great chance at top six if she makes that final.

What do you think Smith will go after at the 2020 Olympic Trials? Sound off in the comments with event and time predictions!

wow i did not know her other best times. jeez..

“Over the last 18 months she has one top 3 time in the world. That’s a big bet on potential only a year out with world record holders in their prime sitting there.” – Andrew Mering in Fantasy chat comments querying Robert Gibbs for drafting Regan Smith 4th.

If this was the 80s Andrew would be the guy tutting others for investing in Apple and Microsoft instead of General Electric. He would be the Pixar executive that keeps commissioning sequels instead of more original films. Forgetting that those bankable franchises only started because someone made a “big bet.” And some thought Reid drafting Regan 2nd in the first draft was Minnesota bias?I’m going to fulfill the dirty role of… Read more »

I hope someone jumps into the W2Fly. It stinks right now. The goal has to be better than beating a 16yr olds time in 1981! Clearly the weakest event progression over the past 40 years.

The greatest talent of Regan Smith is being able to achieve that much in swimming without following any advices of Swimswam’s specialists from discussion section.

Barring there being a massive leap in her 200 free, the most likely scenario feels like it should be both flys, both backs, and prelims of the 200 free. The 100 back will remain a dicey race for her to qualify and medal in because of how deep it is states-side and worldwide. Missy could do that double because she was arguably the favorite in the 200 free, which Regan is nowhere near unless she starts going 154s. If she wants to be considered for a relay, get up and bang out a big heat win in like 1:55 in the morning, then scratch and focus on getting top 2 vs Baker and Smoliga and anyone else who pops up.… Read more »

This is what Highly Questionable dubs “reckless speculation”….

smoliga should look for a spot in the free relay

Between Baker, Smith, Smog and maybe even Bacon and Nelson trials for the 100 back next year are going to be brutal.

100-200m backstroke she will be WR holder and dominate at tokyo 2020– that much is worth betting ur house on. What im more interested in, is her huge potential in also dominating the 200 fly. Judging by her times above.. i believe she has genuine shot to do whats shes done in the 200m backstroke (shave seconds of PB) and perhaps go 2:04’s by the olympics.

The gold medal winning time these world champs, in the Women’s 200m Fly was 2:06-high– only 1 second faster than Smiths PB… thats incredible. Atm, there is no dominant female swimmer in the 200m Fly. In textile suit… there has been no woman under 2:04 barrier. The last even close to that was… Read more »

Not sure if her shoulders could withstand long term training required to reign over both the 2 back and 2 fly. For Tokyo sure thing.