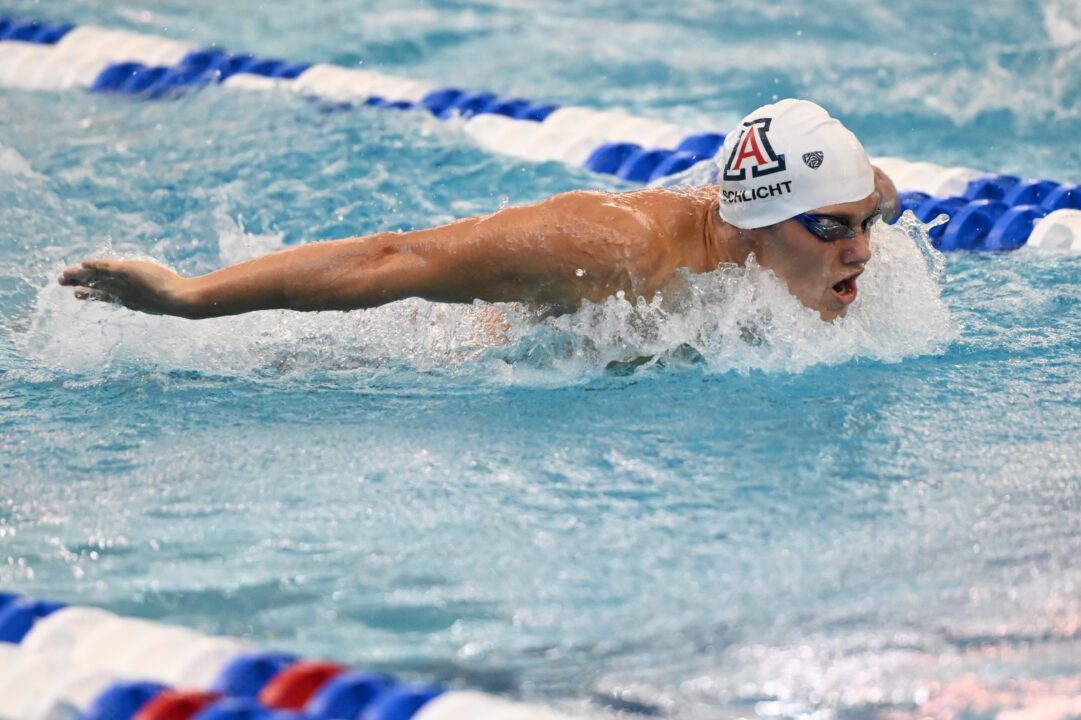 Being one of the top returning IM'ers in the country, Schlicht will be a major addition to whatever program he joins next.  Current photo via NCAA Photos

After two seasons with the University of Arizona Wildcats, All-American David Schlicht has entered the NCAA transfer portal. Schlicht, a breaststroker and IM’er from Australia, raced for the Wildcats at the 2019 and 2021 NCAA Championships and has been a top contributor for the program.

Since this past season won’t count against eligibility for student-athletes, Schlicht appears to have three years of eligibility remaining. His 2021 NCAA meet was his national championship return after redshirting the 2019-20 season for the Olympics (which were pushed to 2021).

FYI – he’s been training at ASU for the last month

I try to remember his LC times but I can’t think of any anywhere near contention .

Lol. We all knew Guerra would be happy about this.

Serious question here- how does SwimSwam find out about the transfer portal students? Do the swimmers give SwimSwam the heads-up on this? Does a coach who has access to it tip-off SwimSwam?

I was also wondering about this. Who and how gets to see when an athlete enters the portal? If the athlete doesn’t talk to the Coach first then does the Coach get a surprise email? Do Coaches just monitor the portal waiting for a fresh catch?

Transfer notification happens via the athletic compliance office. Ideally the athlete would notify the coach first but as indicated, it is not required. Said athlete notifies compliance of the intent to transfer. A form is completed and it is done. I cannot speak about SwimSwam’s knowledge but I believe athletes notify them independently.

in essence nobody knows outside in the insiders if you enter portal but of course it leaks like sieve.

there are people with access who share that info or their info to someone else who can watch the portal.

Find a fried with a Portal login, ask for screen shots of the list. Post story of who’s in. Easy

You won’t get the answer from SwimSwam (nor should they answer) but it’s clear they have access to the portal. Big J Journalism. Kudos to them.

Academics are better than years ago, but still……

UA “Where Legends are made”!

Isn’t this Jemma Schlicht’s brother? If so, paging USC…

SC added a class on this for the fall schedule.

Ha! USC? I don’t think he is fast enough to dodge Kipp’s arsenal that he throws at defenseless swimmers in the water. Anyone looking at USC under Kipp better enroll in pre therapy sessions and invest in a good helmet!

Better yet, give USC a pass til Kipp has left the building.

I think Calypso Sheridan also transferred to USC. Isn’t she ?

She did. She was an OG Kipp recruit IIRC

Connect the dots on this one:
Personal: Born David Theodore Schlicht in September 1999 to Anthony and Katrina Schlicht in Melbourne, Australia…Has two sisters, Jemma and Sammy…Planned major is Civil Engineering because he likes construction and building…Enjoys hanging out with friends, video games, and art…Chose Arizona over ASU, Denver, USC, LSU, Wisconsin, NCU, Grand Canyon, Utah because “I believe it is the best place for me to improve my swimming.”

Calypso Sheridan from Australia via Northwestern will be a Trojan and will be in the Master’s Program in the USC School of Engineering. David Schlict is Jemma’s brother and has an Engineering Major. USC’s Engineering school is ranked #2 behind Cal Tech in SoCal….USC recruited Schlicht out of high school.… Read more »

Connect the dots? You mean right into the USC dumpster fire? Foreigner swimmers and transfers, grad school transfers (or, both), and with few American swimmers and none top-ranked. Southern Cal One and Done University. This won’t change until Temper Tantrum Kipp is fired.

I’d like to understand how an athlete entering the portal affects the current coach/athlete relationship, from ex-athletes or coaches perspective

If it’s the case that the athlete cannot be in touch with any prospective coaches:

I asked this question before, got downvoted. I’m simply trying to understand how this… Read more »

I only can give an example from one situation I was really close to, but in that case the athlete was coming off a medical redshirt and the coach had recruited over him, so kinda a combination of both the two situations you mentioned. My friend did have a great relationship with his coach but when it came down to it he was “gently” ushered out the door about a week and a half after entering the portal. He had a bunch of club teammates swimming at other schools and had kind of always stayed in touch with them and focused his search on who needed someone who swam his events and whether he could impact his conference. Ended up… Read more »

I’m sure it works any number of ways.

It’s worth noting that a swimmer doesn’t need the coach’s permission nor need to tell them that they’re entering the transfer portal. That’s all done through a different hierarchy that doesn’t include the coach.

FWIW, the transfer I mentioned above DID talk to an assistant about potentially transferring but not the head coach before putting his name in the portal, but that was mostly due to the timing of when he entered it.

I get that these are officially two different channels.

But there are only two ways that an athlete enters the portal: the coach is aware of it happening, or the coach is surprised. We’re kidding ourselves if there’re not back channels happening.

thank you all for the anecdotes!

Now…does that still happen? Probably quite a bit, and it’s probably not regulated/enforced very much at all (if ever?)

A few articles lately on how this is turning into a known but unsolvable new issue in the NCAA football/basketball world.