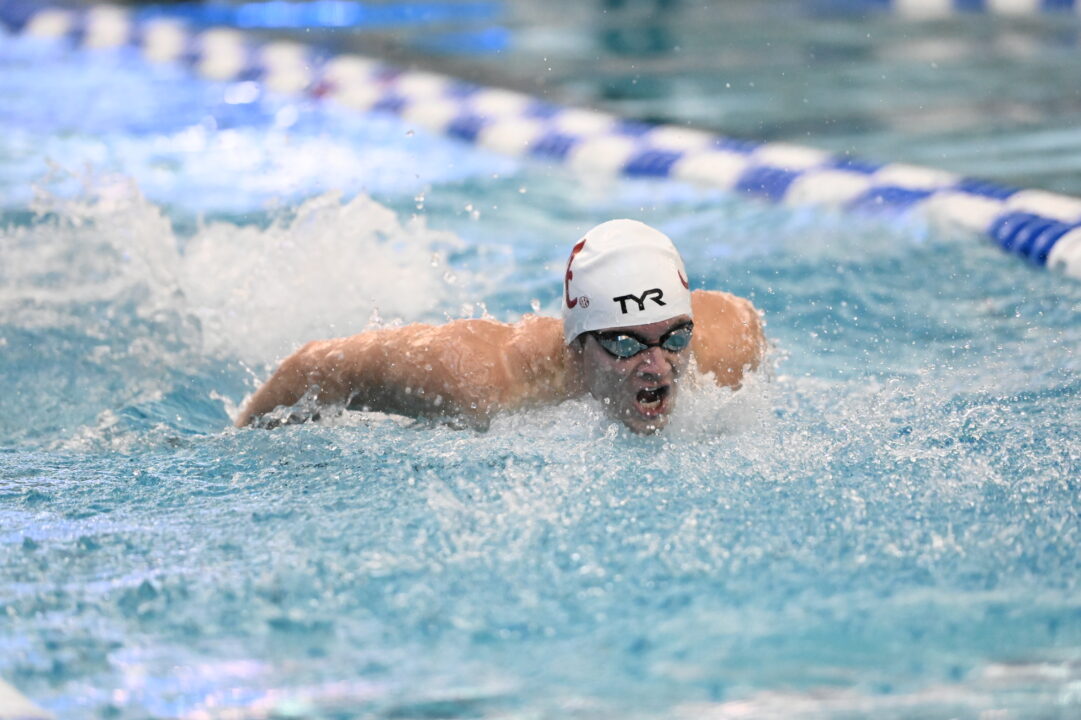 Stogner was a 2021 SEC A-finalist in the 100 butterfly, and he swam on all four of Alabama's scoring relays at the 2021 NCAA Championships. Current photo via The NCAA

Illinois native Colton Stogner has entered the NCAA transfer portal after three years with the University of Alabama. Stogner told SwimSwam that ‘nothing is set in stone’ yet and that he is currently exploring grad school opportunities with his extra year of COVID-19 eligibility. Since this past season won’t count against eligibility, Stogner should have two seasons remaining if he chooses to swim in grad school.

“I’m thankful for the memories and relationships I’ve made with my teammates and wish them the best in these upcoming seasons. I entered the portal to look into grad school opportunites, but the relationship with my coaches has deteriorated and I will not be returning to Alabama Swimming.”

Stogner is a talented sprinter, with strong times in sprint free in addition to butterfly and breaststroke. He did not make Alabama’s SEC squad as a freshman in 2018-19, but he did in 2020 as a sophomore, chipping in C-final appearances in the 50 free, 100 free and 100 fly.

Stogner would be an NCAA relay boost for the majority of teams in the nation with his split performance this past season, and his progression indicates he could become an NCAA scoring threat in the future.

The Alabama men’s team had such potential until the coaching staff fell apart. Who is in charge of making these decisions? Three head coaches in 2 years! They should have promoted Jonty Skinner to the head coach position when Pursley retired. Instead they hired a hot head, verbally abusive coach who left suddenly without warning this year. There is obviously more to the story than “He wanted to focus on his professional athletes.” Does anyone actually believe that story?

Next they hire a professional swimmer with no real coaching experience as the head coach. She may do great, but a brand new coach without experience is certainly not going to draw in new talent. She will first need to prove… Read more »

You must be new to the Bama drama. Pursley’s sudden “retirement” had as much to do with problematic swimmers and their parents causing so many issues as anything. Skinner put himself in a position where he could not be the next head coach or remain as an assistant because of his involvement in the first statement. The reality is that 1 or 2 percent of the team of 50 plus swimmers can be unhappy, justifiably or not, and have the power to disrupt the rest of the team and lead to coaching changes. Bama has had the misfortune of a few swimmers with such great feelings of entitlement that they can take down the entire program. I don’t know what… Read more »

I wonder if the firing of coach Rebecca (who was 6 months pregnant when let go)influenced Colton’s decision to transfer? There are several others from Bama currently in transfer portal and some of their best recruits have recently decommitted. Total mess.

I can’t believe he would talk bad about his coaches in the quote! That is unacceptable! The Alabama coaching staff is perfect. This kid should be exiled to another country or we should bring back tar and feathering as punishment for his actions. Jk… unless….

How is quoting that their ‘relationship has deteriorated’ talking bad about the coaches? Sounds like he is just trying to be honest as to why he has entered the portal. This happens with some coach swimmer relationships no? People are so bothered nowadays smh

He was being sarcastic

The quote was very honest. Its his education and swimming career- sometimes things don’t work out which doesn’t meet there was a malicious intent. He said nothing bad about the coach, in fact the reader can assume it could have been his or the coach’s fault, or neither. This comment board needs more of this type of up front. saying it like it is information. Glad this was not screened out as a comment.

I applaud the honesty.

Florida had three runner-up relays at NCAAs this year. That kind of firepower could help move them to the top of the podium. I hope they give him a call.

Wow, not surprising though. It’s a shame to see three talented sprinters in Liam, Andrew, and Colton all enter the transfer portal. Just imagine what Bama sprinting could’ve become over the next few years with these guys had the staff treated them right. Can’t blame them though, wouldn’t wanna swim at a place where you get treated like dirt… should be a red flag for sprint recruits – not to mention the Margo hire….

Bama is where legends are made! UA is focusing on taking their swim program to the next level…they have the $ to do it unlike other colleges. With the completion of a new $29 million dollar indoor pool and the best of the best athletic training facilities…

0
-1
Reply
Rolling down in the deep south

Bama had 4 different head coaches in the past 2 years, 3 in the past 6 months…no wonder these swimmers are looking into transferring to more professional and consistent teams.

Well… if we can take him at his word/quote, he ain’t swimming at Bama anymore no matter!! Wonder if he wishes he could “retract” that “but the relationship with my coaches has deteriorated” part of his quote? Time will tell!!