Kelsi Dahlia
Kelsi Dahlia is an American sprint butterfly and freestyle specialist, and the first woman in history to swim the 100-yard butterfly in under 50 seconds. Born July 15, 1994 to Bob and Erica Worrell, she grew up in Westampton, New Jersey prior to joining the University of Louisville’s swimming and diving team where she’s studying Exercise Science. The American Record Holder is also a multi-time NCAA All-American and National Champion.

High school
Dahlia graduated from Rancocas Valley Regional High School in New Jersey, where she was the Team MVP and the Burlington County Swimmer of the Year for four years in a row. Aside from being a three-time state champion in the 100-yard fly, Dahlia was also a Senior Nationals Qualifier and a high school All-American in backstroke, freestyle and butterfly events. The summer before her freshman year Dahlia was a finalist in the 100-meter free at the Junior National Championships, and qualified for the Olympic Trials in the 100-meter fly. 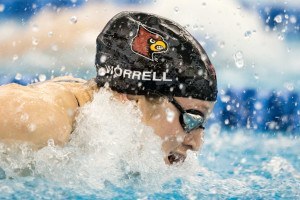 As a freshman Dahlia made an impact right away. Dropping three seconds from her incoming 100 fly time, Dahlia broke the Big East record in the event. She won all three of her individual events at the Big East Championships, and she qualified for the NCAA Championships in her first collegiate year. At the NCAA meet Dahlia ended up finishing 4th in the 100-yard fly and 26th in the 50 and 100-yard free, earning her her first All-American nod.

2013-2014
Returning as a sophomore Dahlia only got better. After focusing as just a sprinter during her freshman, she picked up the 200-yard fly for her third event. Dahlia qualified two years in a row for the NCAA Championships, and this time she finished 2nd overall in the 100-yard fly, marking it the best finish of her career. In one of her most events, the 200-yard fly, Dahlia advanced to the championship final taking 4th, and set a new school record.

2014-2015
Dahlia entered her junior season with big goals set for her team. With one of Louisville’s best squads in program history Dahlia started off her meet by leading Louisville to a top-8 finish in the 200-yard free relay before swimming her individual 50-yard free. Dahlia finished 3rd in the 50-yard free behind Simone Manuel and Ivy Martin. For her third event of day one, Dahlia swam the butterfly leg of the 4×100-meter medley relay that finished in 6th place.

On day two Dahlia began the finals session with the 200-yard medley relay. She swam the butterfly leg to give Louisville the boost they needed to finish runner-up. In the preliminaries of the 100-yard fly Dahlia became the first woman in history to swim the 100-yard fly under 50 seconds breaking the NCAA, American and U.S. Open Records. In the finals session she dropped her records even further, touching in 49.81, more than a second ahead of the 2nd place finisher.

For her third day at the NCAA Championships Dahlia attacked the preliminary heat of the 200-yard fly a little too eagerly, and dropped off the last 50 yards of race. For the championship final Dahlia swam the race completely different, taking out the first 100 yards smoother, and dropped two seconds from her preliminary swim to win herself another NCAA title. She finished the meet off with an 11th place finishing in the 4×100-yard free relay.

Dahlia completed the butterfly double for the second straight year at the NCAA championships. Her most impressive win was the 100-yard, breaking her own NCAA, American and U.S. Open Records. She touched in 49.43, over a second ahead of second place.

In the 200-yard butterfly, Dahlia broke the championship record in the prelims touching in 1:50.61. In the final, she dropped off in the last 50, wbut hung on to clinch gold by .08 seconds.

Dahlia was part of both medley relays for Louisville, picking up a silver and bronze in the 400 and 200-yard, respectively. In her third individual event, Dahlia just missed out on the podium, finish 4th in 50-yard freestyle. 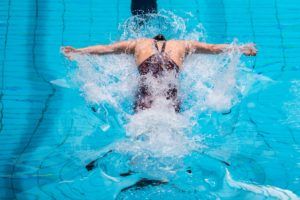 After taking two NCAA titles in her collegiate season Dahlia swam at the 2015 U.S. Nationals in San Antonio. Swimming against the American Record Holder in the event, Dahlia edged Dana Vollmer out for the win, nearly breaking 5 seconds. Showing some versatility, Dahlia’s second event was the 100-meter back, which set the 14th fastest time in American history and the 9th fastest American of 2015.

Dahlia time trialed the 50-meter fly aiming for an American Record. She finished in 25.65 just .15 seconds off of the American Record — her time would’ve been good enough to finish in the top eight of the World Championships. After dropping four seconds from her best time on day four, Dahlia scratched the event in finals.

Dahlia was nominated for USA Swimming’s Breakout Performer of the year award at the Golden Goggles. She was one of three nominees.

In Toronto, Dahlia earned her first international medals. The first came in the 4×100 freestyle relay. After setting a new meet record in the prelims, USA took silver in the final. Her next was a gold in the 100 meter butterfly. Her finals time was slightly slower than the new meet record of 59.24 she set in the prelims. She completed a trio of medals in the 400 meter medley relay splitting 57.34 on the butterfly leg, helping USA to another Pan American Record. 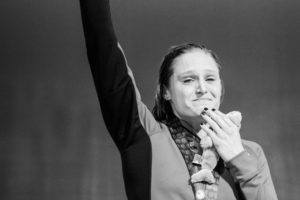 Dahlia punched her ticket to the 2016 Rio Olympics with a win in the 100M Butterfly. Her time of 56.48 beat second place finisher, Dana Vollmer, by .73 seconds.

Dahlia swam to a ninth place finish in the 100 Fly, just missing the Championship Heat. In the 4x100M Medley Relay, Dahlia helped the USA win the Gold.

Dahlia started by finishing fourth in the 100M Free, punching her ticket to the World Games for the 4x100M Free Relay. Dahlia won the 50M Fly just 0.19 seconds off the American Record. She then picked up another win in the 100M Fly topping second place finisher, Sarah Gibson by 0.58 seconds. 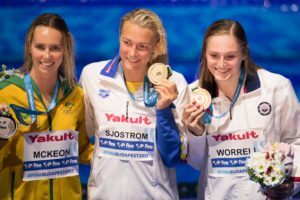 On day one of World Championships Dahlia helped Team USA (Comerford, Manuel & Ledecky) to a new American record in the 4×100 freestyle relay–3:31.72.  Dahlia split a very strong 53.17 on the second leg.

On day two Dahlia followed up with a 2nd Worlds medal, bronze, in the 100m butterfly, swimming a new personal best, 56.37.

Day seven, in the 50m butterfly final, Dahlia missed the podium, 4th, but broke the American record with a 25.48.

Day eight in the final of the 4×100 medley relay, Team USA’s Kathleen Baker, Lilly King, Kelsi Dahlia, and Simone Manuel teamed up to set a World Record. Baker got the ball rolling on the backstroke split with a personal best 58.54 on the backstroke leg, marking the 5th fastest 100 back ever done by an American. King (1:04.48) kept it close as she battled once again down the stretch with Russia’s Yuliya Efimova (1:04.03), but the Russians took the lead through the halfway mark. On the fly leg, Dahlia pulled the USA into the lead with her 56.30, making way for 100 free champ Manuel (52.23) to finish things off as they finished in 3:51.55. That took a half second off the former World Record, which stood as a 3:52.05 done by the USA in 2012.

In Columbus, Dahlia picked up two wins. She touched the wall first in the 100 butterfly with the time of 49.87 which broke the Championship Record. Her second win came in 200 butterfly when she beat Grace Oglesby by 1.12 seconds.

After swimming prelims of the 100 free on day 2, Dahlia had a big night on day 3. First she earned a silver in the 100 fly, touching in a time of 56.44 behind only Japanese swimmer Rikako Ikee. Dahlia finished the night by going 3rd on the American 4×100 free relay, splitting 53.59 to help the team earn silver. She finished off her pan pacs performance with a silver in the women’s 4×100 medley relay, pulling fly duties in a time of 56.72.

Kelsi Dahlia attended the 2nd cluster of world cup meets, including stops in Eindhoven and Budapest. In Budapest, on the last night of competition, Dahlia broke the American record in the 100 (scm) fly with a 54.84, which not only registered as the #2 swim of all-time, but also got her to the wall ahead of world-record holder Sarah Sjostrom.

On June 11, 2019, Kelsi Dahlia was announced as a member of the Cali Condors ISL team, headed by GM Jason Lezak.

Ending her schedule on a high note, Dahlia finished with the 4×100 medley relay, splitting a lifetime-best 56.16 to help USA break their own world record by over a second.