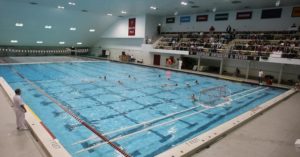 Harvard senior Daniel Chang picked up a winning triple for the Crimson as the men and women both beat Ivy League rival Penn last weekend.

Freshman Gunner Grant stood out for the Harvard Crimson as the men and women defeated Ivy League rival brown last weekend. Grant won all 3 of his events.