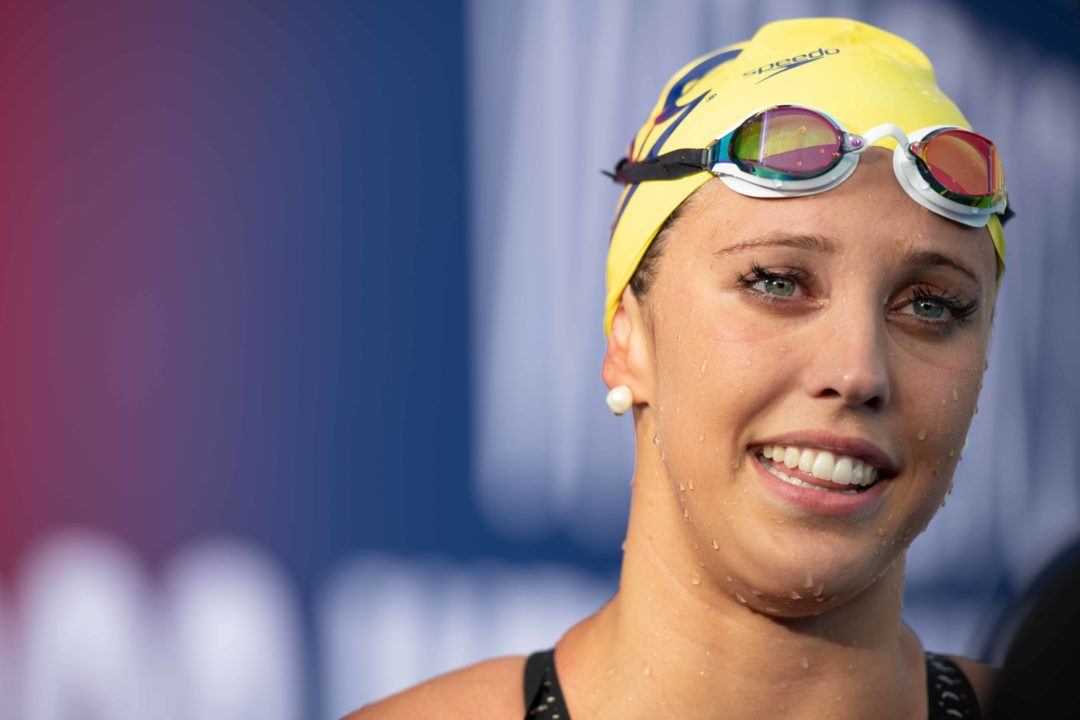 World record holder Kathleen Baker announced Thursday via Twitter that she will forgo her final year of NCAA eligibility to become a professional athlete.

She will remain enrolled as a student at UC Berkeley while training. Baker, who set the World Record in the 100 back at U.S. Nationals last week, cited the opportunity to better manage her Crohn’s Disease as one of the reasons for her decision. Baker was first diagnosed with Crohn’s as a teenager and struggled with the disease through middle school. Her current treatment regimen includes biweekly injections to her abdomen.

Proud to be a part of @CalWSwim and excited for the future! pic.twitter.com/nquESRnsX3

“Kathleen has been an important part of our Cal program these past three years,” McKeever said. “She has helped our team to three consecutive top-3 national finishes and has been a part of numerous individual and relay championships at the NCAA and Pac-12 meets. She has also added to Cal’s legacy internationally having earned medals representing the United States at the Olympic Games and World Championships. I’d like to thank Kathleen for what she means to our program and wish her continued success in swimming and her career. She is a role model for those who have Crohn’s disease, inspiring others with her outlook and high levels of success. I’m also pleased to know that Kathleen plans to continue her studies at Cal to complete her degree requirements studying health and illness through her interdisciplinary studies major.”

Baker was a 3-time champion at last week’s Nationals, tying for the 200 back victory with Regan Smith and winning the 100 back and 200 IM. She was awarded the Phillips 66 Performance Award for her World Record in the 100 back, which she swam in 58.00. In that race, Baker also eclipsed Missy Franklin’s 6-year-old former American Record. Baker will move on to compete at the 2018 Pan Pacific Championships in Tokyo, where she’ll compete in both backstrokes and the 200 IM. She looks like she has a great shot at extending her Worlds schedule to the 200 IM as well after becoming the 2nd fastest American performer ever in the event. She’s also tied as the 10th fastest performer ever worldwide.

In the NCAA, Baker has been a staple for the Bears over the past few seasons. In 2016, she earned her first All-American status as she placed 2nd in the 200 IM as a freshman. She was named the 2017 CSCAA Female Swimmer of the Year after weeping her individual events at NCAAs (100 back, 200 back, 200 IM). She came very close to the American Records in both the 100 back and 200 IM, missing the 200 IM record by just 4 hundredths. That year, she was also a part of Cal’s winning 200 medley relay that set a new NCAA Record.

In 2018, Baker finished 2nd in the 200 IM and 3rd in the 100 back before capping off her NCAA season with a victory in the 200 back, setting a new American Record in the process. Baker is the Cal school record holder in both backstrokes and the 200 IM. All-in-all, she was a 4-time NCAA champion and 7-time individual All-American.

Baker has also had success internationally over the past few seasons, though she’s spent the school year training at Cal and summers training with Dave Marsh. After her freshman year at Cal, Baker qualified for the 2016 U.S. Olympic Team in the 100 back. Individually, she brought home the silver in the 100 back. She won gold as a member of the USA’s champion 400 medley relay. At the 2017 World Championships, she set an American Record in the 50 back (which has since been broken by Olympic teammate Olivia Smoliga). She picked up a silver medal in the 100 back, bronze in the 200 back, and gold in the 400 medley relay.

Very good decision. Better to turn pro now. She will have time to adjust to the pro life before the olympic year. Best wishes for the future.

Why are there so many downvotes in support? Go pro when you can. It’s an easy choice

Did not see this coming. I’m a big fan of Baker but this is some of the worst news i have received this week. I was so looking forward to watching her in her final NCAA season- she is a such a great college swimmer due to her versatility. This also puts the bears in a very tough spot- as she has been their leader for the last 2 seasons, and at this point its too late to use her scholarship money to help recruit a stud(s) for their incoming class to help cushion the points they’ll lose with baker gone. When ledecky went pro, i thought that if everything came together for the bears they had a shot at… Read more »

I’m glad there are these opportunities for non-revenue sports (football and basketball) for both Men AND Women. Baker and Ledecky and I’m sure others have nothing more to prove at the College D1 level.

It’s the recruiting challenge of going after an elite level athlete – if they’re truly elite most likely they won’t finish out their 4 years of eligibility.. At least the opportunity is there. But like “one-and-done” basketball players and declaring early for the NFL football players, you’ve got to grab the opportunity (and the $$) when it presents itself and when your market value is highest.

She is surely among the Super shining stars of swimming right now . So well deserved .

Kathleen is a champion through and through! She will continue to shine, representing and marketing the sport of swimming well for many years to come!

what’s up with the huge number of downvotes on most of these comments? I thought generally people really like Kathleen

Probably an algorithm that spoofs IP addresses/gets around cookies. As with Bobo, I think in certain cases comments and replies are a better reflection of broad opinion.

If it is so as you think then such votes should come in the package very close to each other in time. Such a voting impulse can be easily detected and blocked should it be a desire of site management. Such an effect was never reported. So why not to assume that there can be more than one person who dislikes Kathleen Baker. For instance, the discussion about best college swimmer of the season 2017 was very hot.

Bears will really need Weitzel and Co to step up now if they want to remain in the top 3. But with her going pro that does free up some scholarship money- perhaps there’s another gal or two who can help Cassidy Bayer’s incoming class shine?