Japanese swimmers showed up big-time on day 1 of the Konami Open, including Daiya Seto pumping out a PB in the 200 free. 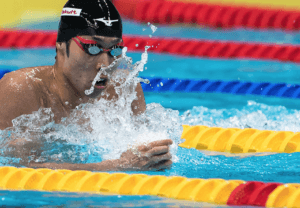 Lucrative cash prizes are up for grabs at this weekend’s Konami Open, which stars Kosuke Hagino, Yui Ohashi, Ryosuke Irie and more.

Kosuke Hagino
Kosuke Hagino is a versatile swimmer from Japan, and a 2012 London and 2016 Rio Olympian. Born Aug. 15, 1994 Hagino specializes in the IM events and the backstroke and freestyle events. Hagino began swimming since before he was 1 year old, and claims that he wasn’t successful at any sport with a ball.

Kitajima’s influence
Japanese swimmers have been successful over the recent years with many thanks to Kosuke Kitajima, who opened the country’s eyes to swimming and gained support for the sport. Hagino is coached by Kitajima’s former coach, Norimasa Hirai, under whom he’s experienced the majority of his success.

2012 Olympics
At his first Olympic Games in 2012, Hagino made a statement by making it to the final of both IM events finishing with a bronze medal in the 400m IM, knocking off Michael Phelps and picking up his first international medal. He also ended up taking fifth in the 200m IM.

Comparison to Michael Phelps
Hagino knocked Phelps off the medal podium in London, and Phelps happens to be Hagino’s role model and the athlete that he admires most. Phelps has made comments on Hagino’s versatility before, and Hagino is challenging Phelps role as the world’s most versatile swimmer.

At the 2015 Japanese Nationals Hagino crushed the field in the 400m IM, setting the year’s fastest time in the event by more than two seconds. His impressive season earned him Swimmer of the Year, one of only two Japanese swimmers to earn the title.

Injury Knocks Hagino out of Worlds

A month before the FINA World Championships in Kazan, Hagino suffered an elbow injury that would force him to miss the meet.

In his second Olympics, Hagino made big improvements from four years ago. He picked up a medal of each color, standing on the podium three times out of his four events.

Hagino kicked off his Olympic schedule by winning the first gold of the games in the pool. He fought off American Chase Kalisz in the final stages of the freestyle leg to touch first, ending the U.S’ streak of five straight Olympics of winning the event. His country mate, Daiya Seto was in control after the butterfly leg, but as the backstroke got underway, Hagino took the reins. He led for the remainder of the race, but he was pushed on by Seto and Kalisz the whole time. Kalisz made his move on the freestyle leg but Hagino had already done enough. He took gold in 4:06.05.

His second Olympic medal came in the 4×200 meter freestyle as he helped Japan to the bronze medal. He got out to a great start for Japan, putting them in second place after the lead off leg. His teammates Naito Ehara and Yuki Kobori kept Japan in second place, but on the final lap Takeshi Matsuda was up against the 2015 200 meter freestyle World Champion James Guy. Matsuda wasn’t able to hold on and Japan finished third in 7:03.50 behind USA and Great Britain.

In the 200 meter medley, Hagino raced to a silver medal behind Michael Phelps. At the halfway mark, Hagino was sat in fourth place, but USA’s Ryan Lochte dropped off dramatically on the breaststroke leg, as did Brazil’s Thiago Pereira on the freestyle leg. Hagino held on to take second in 1:56.61, two seconds behind Phelps, but half a second ahead of Shun Wang in third.

Hagino also swam the 200 meter freestyle in Rio. He went into the final as the second seed, but his 1:45.90 was only enough for seventh.

Hagino took the silver medal in the 200 meter IM behind USA’s Chase Kalisz in 1:56.01. He started to make a comeback on the final 50 but Kalisz’s breaststroke split put him far enough in front for Hagino to catch up. On the longer medley distance, Hagino finished 6th in the final in 4:12.65.

Hagino started off the meet by swimming to a silver in the 400 IM with a time of 4:11.13, only behind American Chase Kalisz and ahead of countryman Daiya Seto. Hagino again medaled in the 200 IM on day 3, touching in a time of 1:56.66 for 3rd place.