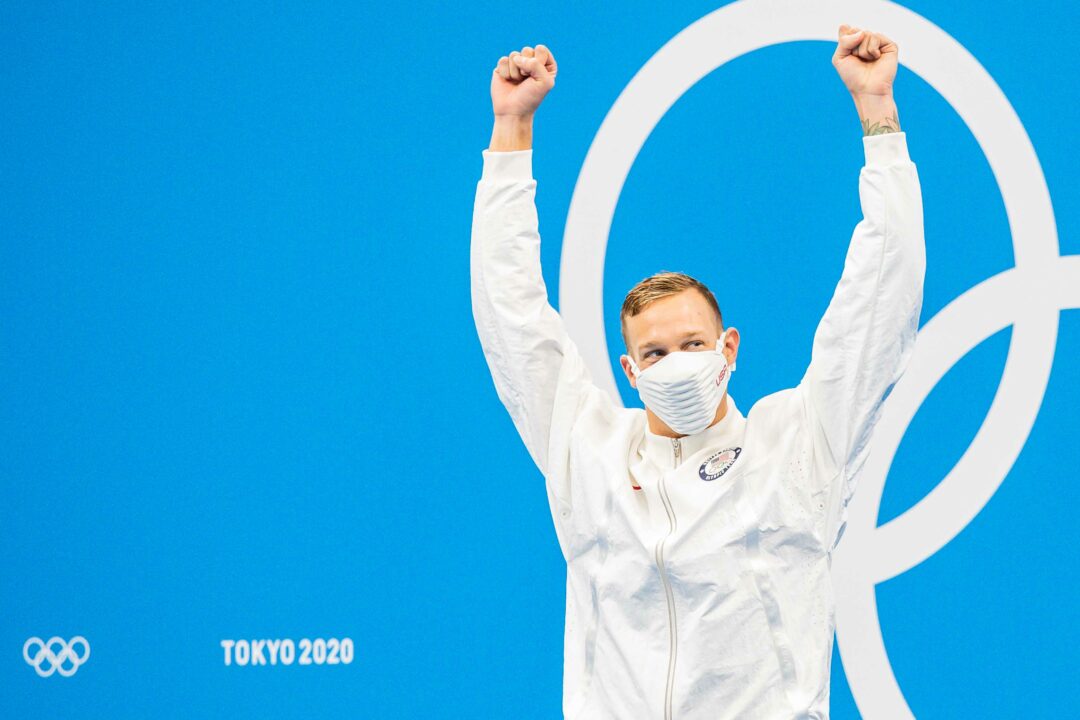 3-time winner of this award Caeleb Dressel won 5 gold medals in Tokyo and downed a number of Olympic and world records along the way. Archive photo via Jack Spitser/Spitser Photography

MacNeil became the first woman in history to break 49 seconds in the SCY 100 fly.

It’s hard to argue that anyone other than Caeleb Dressel is worthy of winning this award. Dressel won the most gold medals at the Tokyo Olympics, set 2 world records, and was the fastest man in the world in 5 different individual events.

We’ll start off with Dressel’s 2021 apex; the Tokyo Olympics. Heading into the Games, Dressel had only ever won 2 Olympic medals in the form of 4×100 freestyle and 4×100 medley relays in 2016. Since Rio 2016, however, he had risen in the world rankings and was considered a heavy contender to win triple gold in the men’s 50 freestyle, 100 freestyle, and 100 butterfly.

Dressel started strong in the prelims round of all 3 of those events in Tokyo with a first-place ranking after round one of the 50 freestyle and 100 butterfly, along with a second-place finish in the 100 butterfly. Notably, Dressel exactly matched the Olympic record in the 100 butterfly during the heats with his 50.39.

During semi-finals, he was again on top of the field in both the 50 freestyle and the 100 butterfly, but Kliment Kolesnikov‘s powerful 47.11 relegated Dressel to land 5 in the final.

That 100 freestyle final was Dressel’s first individual final of the Games and he soared to victory, delivering a 47.02 swim to out-swim reigning champion Kyle Chalmers’ 47.08. It was his second-fastest swim in the event and marked a new Olympic record in the event, improving upon Eamon Sullivan‘s 47.05 from the 2008 Games. Dressel’s swim also ranked #4 all-time in the history of the event behind Cesar Cielo’s 46.91 world record, Alain Bernard’s 46.94, and his own 46.96 from the 2019 World Championships.

Dressel’s second individual Olympic final came two days later when he took to the men’s 100 butterfly. He had already tied the Olympic record with a 50.39, but he had swum a 49.50 world record in the event back in 2019. Dressel did not disappoint in the final and swam to gold with a 49.45 world record. He was 2-for-2 with 1 more event to swim.

On the final day of the Olympics, Dressel was set to race the 50 freestyle and was up against 2012 champion Florent Manaudou, long-time rivals Bruno Fratus and Ben Proud, teammate Michael Andrew, and the trio of Kristian Gkolomeev, Lorenzo Zazzeri, and Thom de Boer.

Just as he had done in the 100 freestyle and butterfly, Dressel got to the wall first in the 50 freestyle, posting a 21.07 Olympic record to take gold by nearly half a second. Manaudou followed with a 21.55, while Fratus placed 3rd in a 21.57. In a matter of days, Dressel had gone from 0 to 3 individual Olympic medals and had set three Olympic records and a new world record.

Aside from his individual performances, Dressel was also a key player in two gold medal-winning relays. Dressel opened things up for the American men with a field-leading 47.26 on the men’s 4×100 freestyle relay. As Blake Pieroni, Bowe Becker, and Zach Apple followed, the Americans ultimately topped the podium with a 3:08.97. In the men’s 4×100 medley, Dressel swam a 49.03 butterfly leg, which was the only sub-50 split in the entire heat. He, along with Ryan Murphy, Michael Andrew, and Zach Apple, together put up a 3:26.78 to set a new world record and win Olympic gold.

As previously mentioned, Dressel was the fastest man in 5 different events individual events this year. Three of those events were long course events; the 3 in which he won Olympic gold. He was also the fastest man in 2021 in the short course 100 butterfly (48.53) and 100 IM (50.68), as well as the second-fastest man worldwide in both the 50 and 100 freestyles.

For a third straight season, Caeleb Dressel was a force to be reckoned with as a member of the Cali Condors in the International Swimming League. Perhaps Dressel’s most impressive feat during the 2021 ISL season was his ability to finish 8th overall in the MVP rankings despite only competing in 5 matches. For reference, league winner Sarah Sjostrom raced in 8 matches, second-ranked Ilya Shymanovich in 7, and all other top 10 finishers in 8.

With a 5-gold medal performance at the Tokyo Olympics, a myriad of record-breaking swims, and a consistently dominant showing in the short course pool, Caeleb Dressel was the top male performer in the world this year.

tbh I think Milak could make the HM too. He may have only won 1 gold but his 200 fly is heads and shoulders above the competition and his 100 fly was honestly ridiculous

Completely agree with this. Milak does get a lot of appreciation, but I still feel he’s underappreciated. To me, he’s the #2 swimmer in the world right now, and not by a little.

That…is quite the resume. I think he maybe gets slighted since his performance in the 200 fly isn’t quite at Peaty levels of dominance, and he hasn’t even completely broken through in any stroke besides fly, so perhaps the narrative isn’t quite there.

Totally agree, I made pretty much the exact same comment on the European Male Swimmer of the Year article.

Milak getting the Lochte/Cseh treatment where his resume looks less impressive than it might because he’s going up against the best swimmer of his generation.

If Remel didn’t exist, Milak has two individual golds, winning the 200 fly by 2.5 seconds with a “disappointing” time, and winning the 100 fly by over a second. 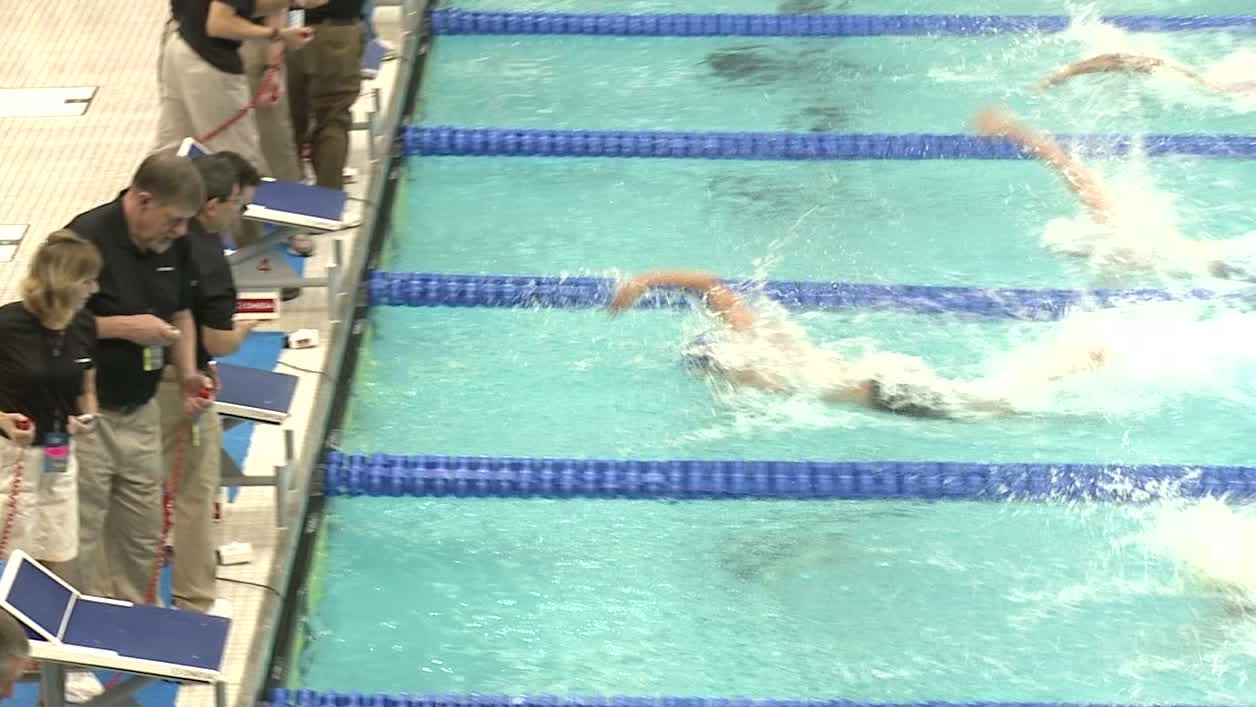 We can only nominate Caeleb if he goes sub 20” 75yrds w/fins. That’s what really matters today. Forget Olympic gold or WRs.

Dressel may note have the most beautiful freestyle stroke in the world, but the sheer power he demonstrates from break-out to finish is astounding. And, of course, THE START – clearly no one does it better. So, yes, he is the CLEAR winner, fins or no fins!

It’s a terrible stroke when looking from above.