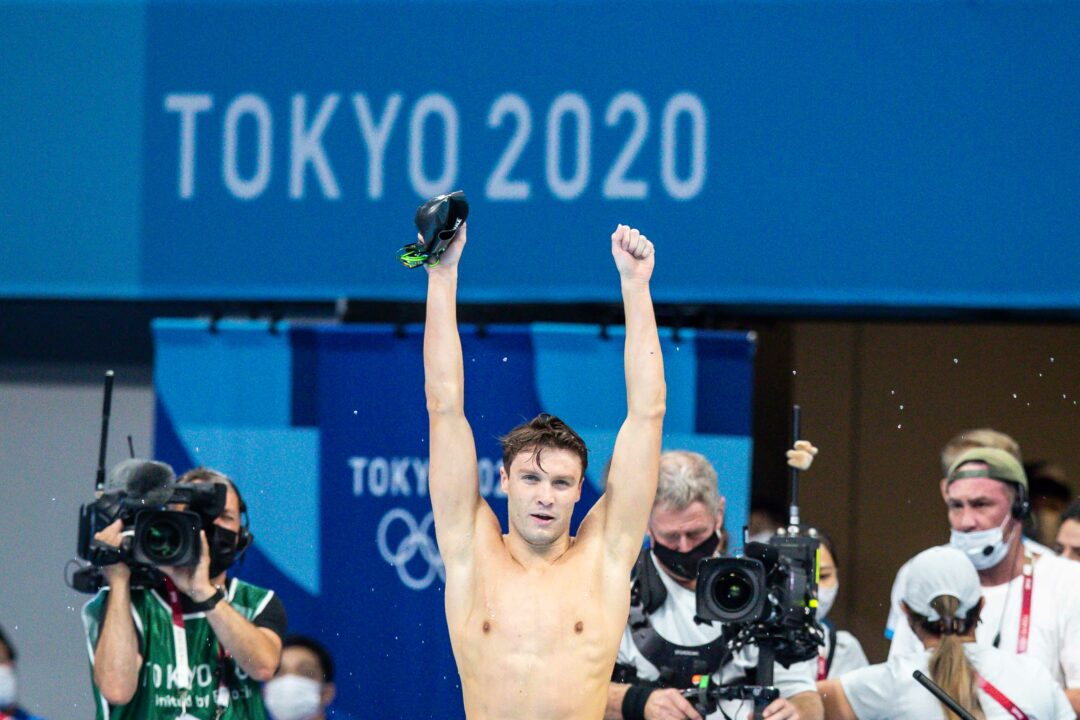 22-year-old Bobby Finke stole the spotlight in Tokyo this summer, wowing the world by taking two individual gold medals at the 2020 Olympic Games. Finke topped both the men’s 800m and 1500m freestyle podiums and did so in history-making fashion on multiple fronts.

First, Finke dropped the hammer on a longstanding distance drought for the stars n’ stripes. Entering this year’s Olympic Games the American men hadn’t won a single gold medal in the 400, 800, or 1500 free at either the Olympics or long course World Championships since 1984.

Also en route to clocking a new American Record of 7:41.87 in the shorter event, the University of Florida ace introduced spectators around the globe to what is now known as ‘getting Finked’.

At the final turn of the grueling 800m free race in Tokyo, it appeared to be a battle between Ukraine’s Mykhailo Romanchuk and Italy’s Gregorio Paltrinieri for the gold medal. However, on the final 50, Finke closed in a monster 26.39 to run down the field and capture the top prize.

The story was similar in the 1500m. Finke held pace with Romanchuk and Germany’s Florian Wellbrock most of the way, then once again turned on the jets over the final stretch. His final 50m split of 25.78 in his 1500m free wound up being faster than any non-leadoff split in the final of the men’s 200 free there in that event’s Tokyo final.

Prior to 2021, Finke had been seen as a promising distance swimmer, with a solid long course pedigree as a teenager. He won both the 800m and the 1500m free events at the 2016 Junior Pan Pacific Championships and made the senior 2017 World Championship team before he had graduated high school in 2018.

As a Gator freshman, he was initially named to the 2019 World University Games team before having to withdraw due to a wrist injury. The next year, he began to make his mark on the yards record books as he demolished the U.S. Open Record in the 1650 at SECs.

This year at the SECs Finke was also spotted on deck donning a walking boot although that injury didn’t appear to have impacted his performances. He wound up as the NCAA champion in the 400m IM and 1500m freestyle events at the end of this season.

It was thrilling to watch Bobby battle so hard through those long races and then summon a tremendous burst of energy to pass everyone and win Olympic gold.

No one who watched it will ever forget it.

I mean, where Paltrinieri can’t even get on the podium, that’s a battle of giants. Not to mention the entertainment factor: the most exciting distance event in decades.

Paltrinieri being off the podium was hardly surprising given the circumstances.

3
-1
Reply
There's no doubt that he's tightening up

Seeing Peaty win this award in 2014 is crazy. Things worked out pretty well for him…

I don’t think more than a couple people knew who Ahmed Hafnaoui was before 6 months ago, so I think he should have gotten it.

I don’t think it’s about recognition, but their results and performance.

Well decided, could see zsc or hafnaoui but I think double Olympic gold speaks for itself

Hafnaoui the biggest shock, Stubblety-Cook the most impressive in an extremely stacked event, Finke the only one with 2x individual golds, Dean with probably the best season overall (of the breakthrough crew).

Any of them would have been more than worthy, but hard to argue with two individual Olympic golds.

Yeah we went in circles on this one for a while. Lots of big candidates. Finke, given his injuries throughout the quad, landing on 2 golds, seemed like the biggest amplitude.

i would love to listen in on these talks you have Braden!! Random question…do the winners of the end of the year awards actually get something from SwimSwam? (like a bronze statue of Gold Medal Mel? OK, I’m joking about Mel, but serious about the question)

It is hard to argue against 2 individual Olympic golds. (Sarah Sjostrom has been to three Games and only has 1.)

“turned on the jets” is, unbelievably, an understatement.