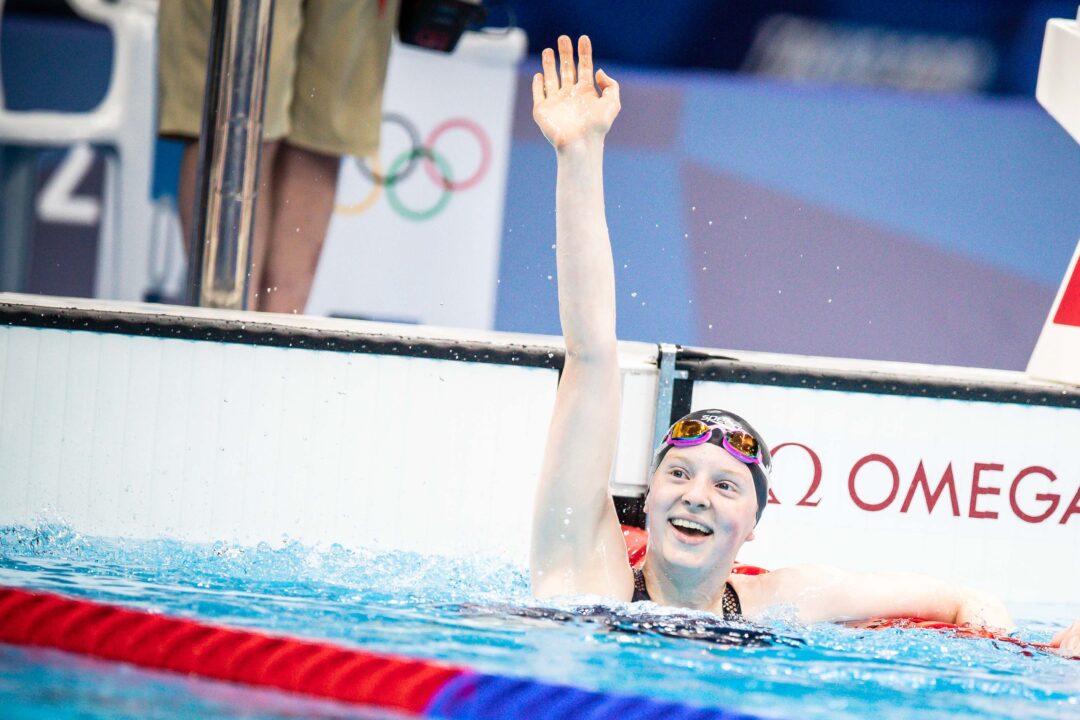 Although there were many swimmers who benefited from the delayed 2020 Olympic Games, none saw a greater rise in 2021 than American teenager Lydia Jacoby. Archive photo via Jack Spitser/Spitser Photography

Although there were many swimmers who benefited from the delayed Tokyo 2020 Olympic Games, none saw a greater rise in 2021 than American teenager Lydia Jacoby.

Jacoby entered 2021 as a relatively unknown name on the senior level. Yes, she was a member of the US National Junior Team in 2019, but she had never competed at an international competition. Then, at the Pro Swim Series in April, Jacoby turned heads when she threw down a time of 1:06.38 in the 100 breaststroke, finishing second only to world record holder and defending Olympic Champion Lilly King, beating National team member Annie Lazor in the process. Although her time certainly didn’t put her in contention for an Olympic podium, it definitely hinted that she could challenge for a spot on the US Olympic Team that June.

With momentum on her side following several other strong performances throughout the first half of 2021, Jacoby entered Olympic Trials a dark horse pick to make the Olympic Team in the 100 breast, one of the most crowded fields at the entire meet. Despite being one of the youngest swimmers in the field at only 17-years-old, Jacoby maintained a poised performance in Ohama, cruising through prelims before dropping a best time of 1:05.71 in semi-finals to qualify 3rd for the final. Then, Jacoby unleashed another best time in finals, dropping a 1:05.28 to finish second behind King and qualify for her first Olympic Team.

In Tokyo, Jacoby carried herself through the first two rounds of the 100 breaststroke with the same poise that she showed at Trials, qualifying 3rd for the event’s finals. During finals, Jacoby swam a relatively controlled first 50, hanging right with King and South African Tatjana Schoenmaker. Then, on the final 15 meters of the race, Jacoby made her move, sprinting ahead of a fading King and Schoenmaker to touch the wall first in a time of 1:04.95, winning Olympic gold.

What’s sets Jacoby apart from the rest of the field is not simply her Olympic gold, but also how improbable her rise to the top of the Olympic podium was. Since mid-2019, Jacoby has dropped almost 5 seconds off of her best time in the 100 breast, going from 1:09.62 to 1:04.95, dropping 2 seconds from April to July of 2021. At the end of 2020, Jacoby was only ranked 27th in the world in the 100 breaststroke, and 7th in the United States, giving her a slim chance of even finaling in Omaha.

Congratulations LYDIA! Well deserved! Alaska and your hometown are so proud!!!

Absolutely! Congratulations. How tall is Lydia?

If you consider Schoenmaker as having a breakout then obviously she should’ve won but it seems to me that she’d already broken out at 2019 Worlds and even Comm Games so probably shouldn’t even have a mention here.

Good find! If you eliminate Schoenmaker this article is very short on honourable mentions.

I think Grimes might deserve HM too? her best time of 2020 was 8:45 and coming into trials, the only time she had ever broken 8:40 in 2019. She then dropped over 10 seconds from her season best in both prelims and finals at OT and then a couple more seconds at the actual Olympics

I would say that Grimes is even more so than McIntosh, given that she had been a star for a while and was A-finaling at PSS when she was 13 or so.