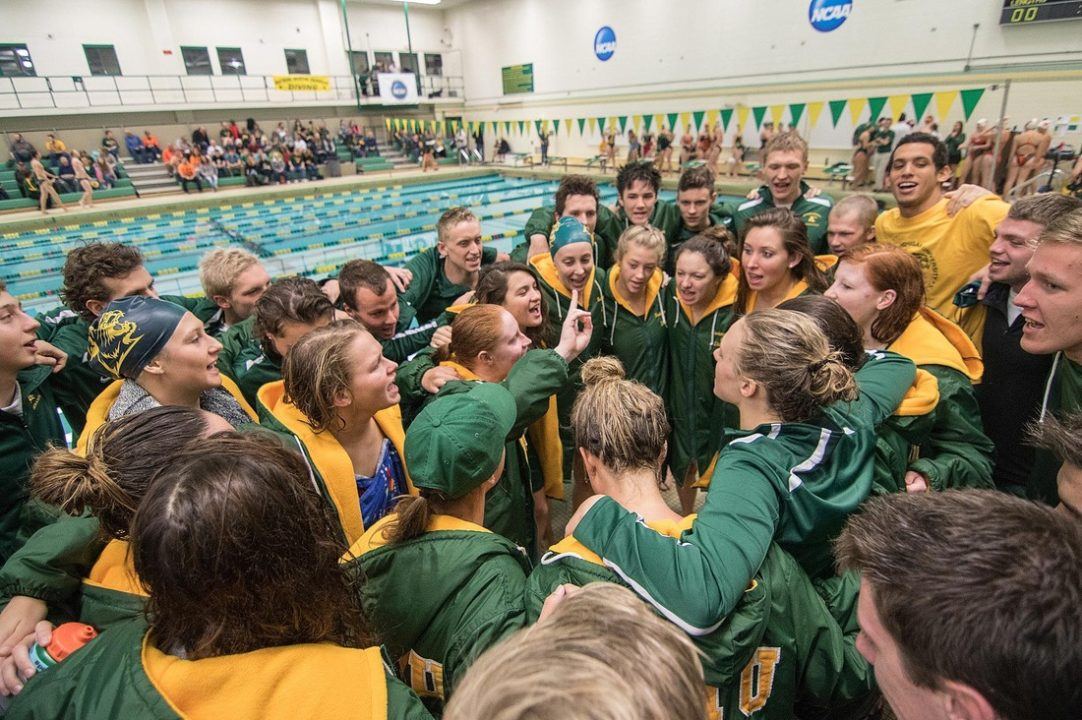 Northern Michigan swept every event on the men’s side, getting some valuable wins from the freshman class. Individually, freshmen Patrick Andrews and Ezra Billings each won an event. Andrews picked up his victory in the 400 freestyle, swimming a time of 4:21.02 to lead a 1-2-3 finish for Northern Michigan with senior Grant Combs and freshman Jackson Cotter. Billings saw his victory in the 50 freestyle, where he touched in a time of 23.51 to contribute 9 points to his team’s total.

In the 200 IM, Northern Michigan also saw a 1-2-3 sweep, lead by junior Erikas Kapocius, who touched first in a time of 2:16.01, just ahead of Andrews and senior Levi Lewis. Sophomore Thibault Auger also contributed victories for the Northern Michigan Men, as he won the 50 and 100 backstroke, with times of 27.81 and 1:00.17, respectively.

In the relays, the Northern Michigan men dominated as well. Opening the meet, the team of Auger, Roberto Camera, Ryan Lund, and Billings won the 200 medley relay by almost 7 seconds, touching in a time of 1:45.14. Later, in the 200 freestyle relay, Auger was replaced by junior Ivan Amillo-Escobedo, and the team combined for a time of 1:37.33, winning by 3 seconds.

Hannig and Burrows led a sweep of the freestyle events for Michigan, taking the 100 and 50 freestyle, respectively, with times of 59.88 and 27.56.

In the 200 medley relay, Carbone, DeKievit, and Burrows combined with junior Michaela Nelson to touch in a time of 2:00.66, over 7 seconds ahead of the field. Later, the team of Nelson, Burrows, Pilar Perello-Ferrer, and Jasper Bunker dominated the 200 freestyle relay, winning by 10 seconds with a time of 2:01.55.