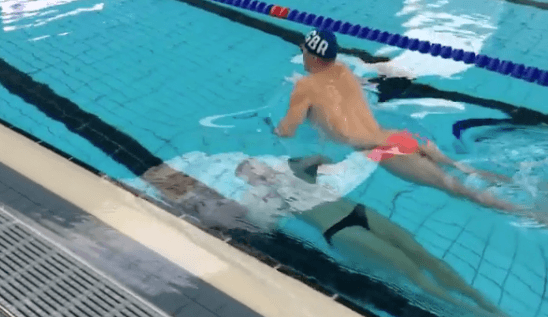 Adam Peaty's Mirror Breaststroke video blew up the internet and blew our minds in 2017, and that's why it's our 2017 Swammy Award winner for Viral Video of the Year. Current photo via Satiro Sodre/SS Press

In 2017 Adam Peaty may have broken his own world record twice in the 50 LCM breast, received the ‘Most Excellent Order of the British Empire’ (MBE) from the Queen herself, and generally lived his life as the greatest sprint breaststroker in history, but most importantly he introduced us all to the wonder that is mirror breaststroke.

The video, filmed with fellow British national teamer Jarvis Parkinson as the surface swimmer, garnered almost a million views on Instagram and soon after, inspired swimmers around the world to try out their own #mirrorswimming.

2017 was the year of the hashtag challenge, from #touchtheflags to the ever-present #snowchallenge. But, #mirrorbreaststroke was the coolest, and the American superstars at Team Elite (including Kathleen Baker) used the Peaty Mirror Breaststroke as a jumping-off point to mirror swimming in the ultimate hashtag challenge winner.

The Lilly King / Yuliya Efimova finger-wagging faceoff of 2016 was one of the great stories of the Rio Olympics, and the rivalry hasn’t cooled down in 2017. The finger wagging started when Efimova held up a finger to indicate “number one,” and a ready room camera caught King shaking her finger back and forth Efimova’s image on the ready room tv screen. King ultimately won the 100 breast in Olympic record time. This year, Efimova wagged her finger after putting up the second-fastest swim in history in the women’s 100 breast Budapest semifinals and missing the world record by just .01. But, once again, she wagged too soon. King ended up taking the world record and the world title in the event, going 1:04.13. King also hit a world record 29.40 in the 50 breast, while Efimova won the 200 breast in 2:19.64.

Michael Andrew as the Spectacular Spider-Man

This Halloween, swimmers went hard, but Michael Andrew absolutely blew everyone out of the water. He has our vote for the lead in the inevitable fourth Spider-Man franchise. And his dog will definitely make a cameo.

Is that Michael Andrew’s personal pool?