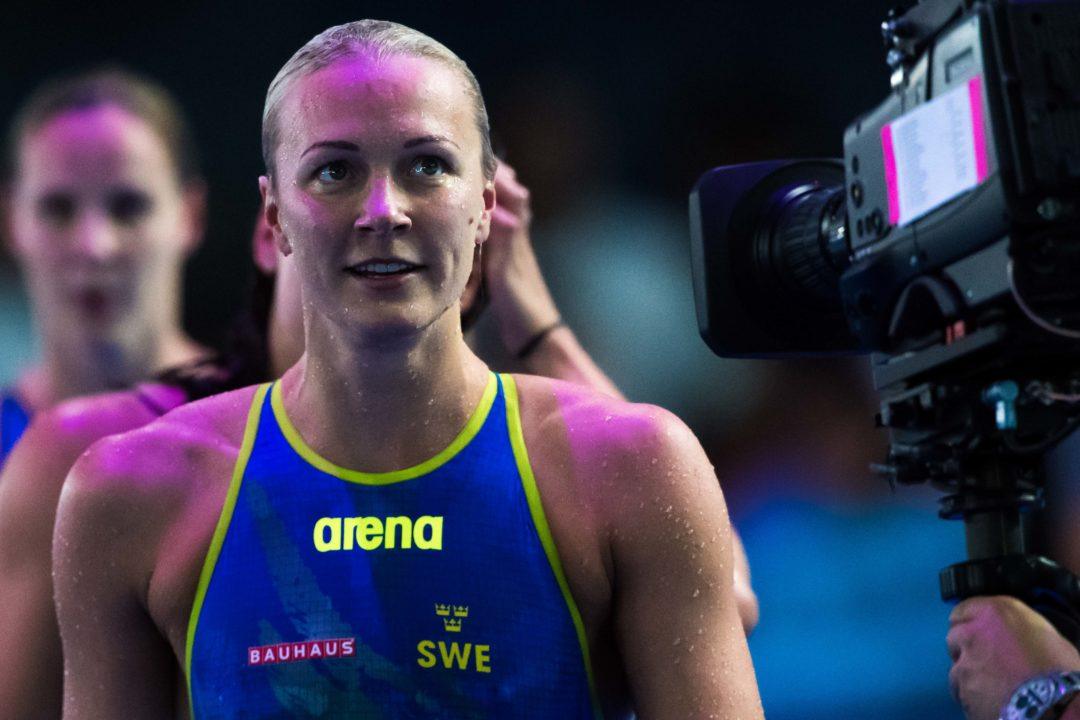 To see all of our 2017 Swammy Awards presented by TYR, click here.  2017 FEMALE SWIMMER OF THE YEAR: SARAH SJÖSTRÖM It... Archive photo via Mike Lewis/Ola Vista Photography

It seemed like we couldn’t get through a single month of 2017 without seeing ‘Sarah Sjöström‘ and ‘world record’ in the same headline. The Swede was quite the force in 2017, taking multiple events to uncharted territories, breaking down supersuit records, and proving that she’s the best sprinter in the world.

Had Katie Ledecky and Katinka Hosszu been in 2016 form, this wouldn’t be so clear-cut. Ledecky looked oddly human in her distance events, and was defeated in the 200 in Budapest, while Hosszu wasn’t able to secure any non-IM golds and was off of her best times across the board (save for the 200 back).

Sjöström made her presence known all year, her year highlighted by becoming the first woman under 52 seconds in the 100 free and going faster than Britta Steffen’s 50 free world record not once, but twice, at the 2017 World Championships. She was also the World Champion in the 50 and 100 fly, not far off of her own world records in both events.

Sjöström’s raw speed is awe-inspiring and unmatched, and she leaves 2017 with six world records, three of which were done this year.

Congratulations Sarah Sjöström! I’m swedish so I am very happy for her and the Swedish swimming team ??‍♀️??

I would give Lilly King an honorable mention.

DEFINITELY! Shes a specialist and completely delivered in her disciplines.

Or maybe she needs a 2:18 to complete the package with her current times?

Thanks bobo, happy new year to you too!

Great year for Sarah Sjöström. In LCM and SCM. Amazing world records.
“she’s the best sprinter in the world”
The fastest yes. But the best, she must still prove it when it counts the most in the Queen race of sprint, the 100 free. She didn’t win the 100 free gold at worlds. She didn’t win the 100 free in Rio. Simone Manuel did it. Maybe not a coincidence. And Simone is still considered as a surprise and is still not taken seriously by a lot of people. Weird. The Swedish star needs major international titles in the Queen race of sprint in 2019 and 2020 and then I will call her the greatest sprinter of all time.

Two things happened to Sjostrom in the race:
First, she was to focused on rebreaking the WR, as shown by how fast she went out, and payed then price.
Second, Manuel had an insane swim. Yes Sjostrom has been 51.77, but 52.21 is ridiculous. In fact only three women, Sjostrom, C. Campbell, and Steffen, who was in a rubber suit. Sjostrom has been amazingly consistent this year, she hit 52 low in almost all of her 100 free swims, and in the final she went 52 low, just another person also went 52 low and edged her out. I’m not a huge fan of Simone, but that race in Budapest was mostly Simone’s triumph, not Sjostroms failing.

What surprised me most in this 100 free final race wasn’t a Sjostrom’s lost. The 52.27 is incredibly fast time. Sarah was only twice faster. Cate Campbell was only once that good. This time cannot be swum casually and needs some preparation: mental, physical, tactical. There was nothing wrong with her attempt to break world record and he 52.31 cannot be considered a failure. It is nothing like Campbell’s case at Olympic race. She just wasn’t ready that someone else can swim 52.27 and she’s better be wise with her tactic.
What surprised me most was Simone Manuel reaction. It was nothing like emotional outburst in Rio. It was nothing like arrogant: “well, big deal. Just one another swim… Read more »

I agree, you have to win to be considered the GOAT. Phelps in his prime never lost in his best events. In 2008, when his goggles filled up with water in the 200 fly, he still won. When he supposedly had the inferior suit in the 100 fly in 2009, he still won. We can make excuses for Sjostrom all day long but the great ones overcome that. With that being that, Sjostrom had a monster year and I do consider her the best female sprinter as of now.

Well said, AND that race where MP’s googles filled up, he also broke the WR to boot.

I disagree with the characterization of Ledecky’s year here (“oddly human in her distance events”, “not 100%”). Ledecky had an incredible 2017, as strong and consistent (and 100% and inhumane!) as ever. She broke individual SCY records 6 times across three different events in 2017 including the 500 Free, 1650 Free, and 400 IM and was also part of at least four record-breaking relay swims. She swam a 4:24 in the 500 Free, and won all of her distance races in 2017, SCY and LCM, by overwhelming margins–including a 21-second win in the 1650 SCY Free against the former NCAA record holder, and a 19-second win over four-time Olympic medalist Mireia Belmonte in the 1500 LCM Free at Worlds. Ledecky… Read more »

But you will probably agree with me that something unusual and a little bit troubling was noticed this season.
First, no positive effects of tapering at two major meets.
Secondly, very strange race at 200 final. It was significantly slower than semi-final race that followed immediately after 1500 final. And slower then next day swim in relay. We haven’t seen in this race her signature feature, that she rather dies then lose race.
Third, she was so exhausted after her new 1650 record that couldn’t even response on congratulations of her teammates five minutes after race. This season was not that promising as the Olympic one. I hope it was by design.

Maybe I worry too much
https://www.ledeckydaily.com/2017/11/18/katie-ledecky-breaks-american-record-1650-free-day-3-art-adamson-invite/

Right Yozhik. As you can plainly see in the video, Ledecky breaks the 1650 Free record, is not breathing hard, gets out of the pool and immediately slaps hands with about six of her teammates.

I think its hard for us not in this position to understand, but I could definitely see the day after a huge double and 1500 being way harder to find speed, than right after your muscles have been warmed up in that mile.

Its 2 completely different types of preparation for those events, and sometimes distance swimmers do things that dont seem logical to other athletes. Rest hasnt done too much for Ledeckey in recent years. Consistency and perserverence is what enables her to get up for a 200, not rest or sprint speed or power.

I hope the Olympic schedule plays to her strengths cause I still think she can do a 1:52 and it will be… Read more »

Ledecky’s scy times are totally misleading. She hadn’t focused on anything scy in at least 2-3 years. During 2015-2016 she would have been considerably faster had she focused there. With lcm, pretty clear 2017 was slower than 2016. Perhaps by design. Perhaps not.

@Gigi:
The Swedish star is the greatest sprinter ever and doesn’t need and most likely doesn’t care about your approval.

For sure Sjostrom shouldn’t be considered “best sprinter” because that’s such a nebulous thing and she’s had some pretty subpar freestyle swims in big meets. (Not only did she not win the 100m free in Rio, she didn’t even make the 50 final. [Though I wouldn’t have had her as a favorite going into Rio for either of those races.])

She’s still the fastest, though.