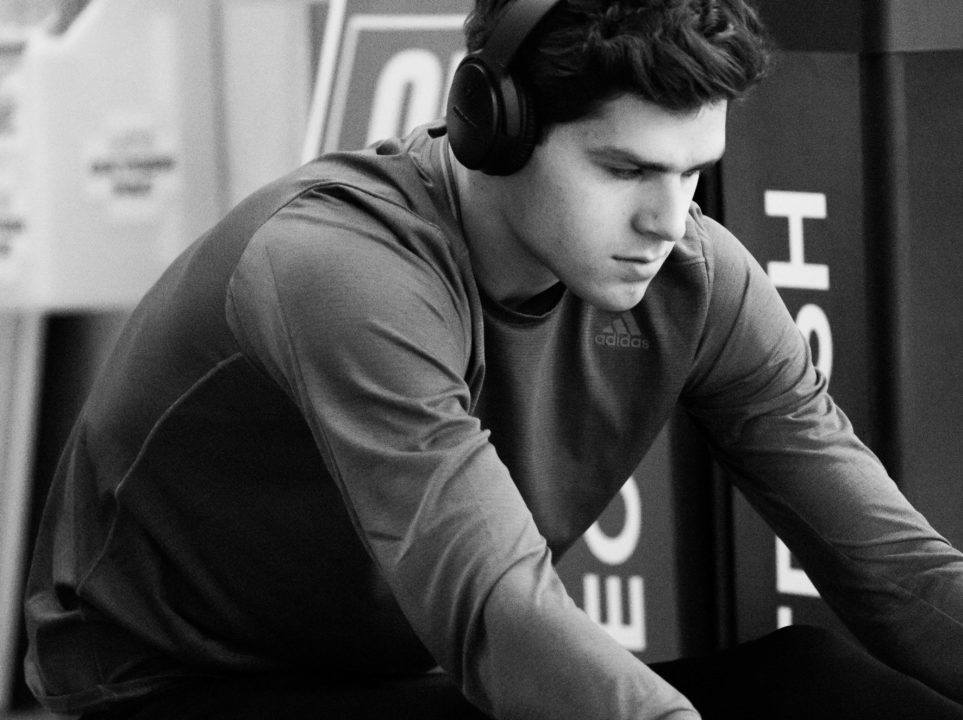 Olivia Carter and Michael Andrew (pictured) are our honorees for 2017 Age Grouper of the Year in the 17-18 category. Archive photo via Mike Lewis/Ola Vista Photography

Olivia Carter has had a whirlwind of a last-twelve-months, beginning and ending with national titles in the 200 fly at Winter Juniors. This past December, she not only repeated her 2016 title, but improved her time by 2.3 seconds and broke the Winter Junior Nationals combined meet record in the event. Carter took nearly a full second off Ella Eastin’s 2014 meet mark of 1:54.37 and became the first swimmer at Winter Juniors to break the 1:54 barrier in the girls’ 200 fly, going 1:53.49. Carter also won the 400 IM, dropping nearly 6 seconds from her seed time. She was runner-up in the 200 IM and seventh in the 100 back. She posted the second-fastest prelims time in the 200 back but scratched the final to focus on the 200 fly. All in all, Carter scored PBs in the SCY 200 free, 100/200 back, 200 fly, and 200/400 IM at Winter Juniors. Carter also broke the 200m fly meet record, that had previously belonged to Jasmine Tosky, at 2017 Summer Junior Nationals, and left East Meadow with new times in the LCM 200 free, 200 back, 100/200 fly, and 200/400 IM.

Michael Andrew’s swan song year in age group swimming was as impressive as ever. While he didn’t break any National Age Group records in 2017 (he has owned the boys’ 17-18 100m breast NAG since 2016), he did take down a handful of World Junior Records during the year. Swimming at the 6th FINA World Junior Swimming Championships in Indianapolis this summer, Andrew broke and lowered WJRs in the 50 back, 50 fly, and 50 free. He began with the 50 back, going 24.63 in prelims to take .31 off Kliment Kolesnikov’s WJR. Later that same morning, he smashed the 50 free WJR with 21.75, becoming the first 18-and-under to break 22 seconds since FINA began charting junior records.

The next night, Andrew tied his own mark of 24.63 to win gold in the final of the 50 back; he took down Li Zhuhao’s WJR in the 50 fly with his semifinal time of 23.27; and he won the 50 free with a second 21.75, tying his own World Junior Record from prelims. Those two 21.75s made him the second-fastest American sprinter of 2017; only Caeleb Dressel topped Andrew with his 21.15 from World Championships in Budapest.

In November, Michael “broke” the WJR in the 100 SCM IM with 51.86 from the World Cup in Beijing. It wasn’t his fastest; he’d been 51.84 in Windsor last December at 2016 FINA World Championships 25m, but that record hadn’t yet been ratified by FINA. The next week, however, he went 51.65 at the Singapore World Cup, lowering the mark further still. In Singapore he was also part of another World Junior Record, this time as a member of the mixed 4×50 medley along with Alex Walsh (back), Regan Smith (fly), and Trey Freeman (free).

Drew Kibler began 2017 by breaking the National Public High School Record at the Indiana State Championship meet while representing Carmel High School. Kibler swam a 1:33.30 in prelims, which was not only the fastest time ever done by a public high school swimmer, beating Maxime Rooney’s 2017 mark of 1:33.70, but was also the second-fastest high school swim of all time, just missing Grant Shoults‘ 1:33.26 from 2015. And he was still a month away from aging into the 17-18s at that point.

This summer, Kibler won gold and silver medals as part of Team USA’s 4x100m medley and 4x200m free relays, respectively, at Junior World Championships in Indianapolis. He also competed individually in the 100 back (he finished fourth, just off the podium) and 100 fly (15th).

Great selection. Michael Andrew is such a good athlete, a role model. However, he falls on the different category. He is a pro, and the other swimmers mentioned above are student-athletes, whose main occupation is a student- attending high school, making up assignments and assessment whrn they miss their class for swim meets.

This award does not specify pro or not. So yes, his amazing performances should qualify that.

Another ones not even mentioned, but did great- Dakota Luther (representex USA at World) and Andrew Abruzzo( 3 gold medals at Jr world).

What about Andrew Abruzzo? 3 Golds at World Juniors should at least get him an Honorable Mention.

I agree! Michael Andrew deserves the title, but Andrew Abruzzo’s performances at the World Juniors should place him runner-up!

what’s the point of Michael Andrews breaking short course NAG records if he can’t swim college? He’s got to have a hell of a lot of yards records. Not trying to be mean, actually just curious.

It’s kind of a bummer he won’t get to compete in college swimming considering a lot of American professional swimmers consider NCAAs the most fun meet that they compete in (including Olympians). It makes me scratch my head, it’s got to have been a lonely career for him thus far

Those 17-18 records have proved hard to beat for Michael Andrew.

Maybe Swim Swam can do an article when Michael turns 19 to review his career in AG swimming and all the records he set. I think he set around 70-80 records in total.

I just read on the Michael Andrew Wikipedia page that he has set “over 100” AG records.