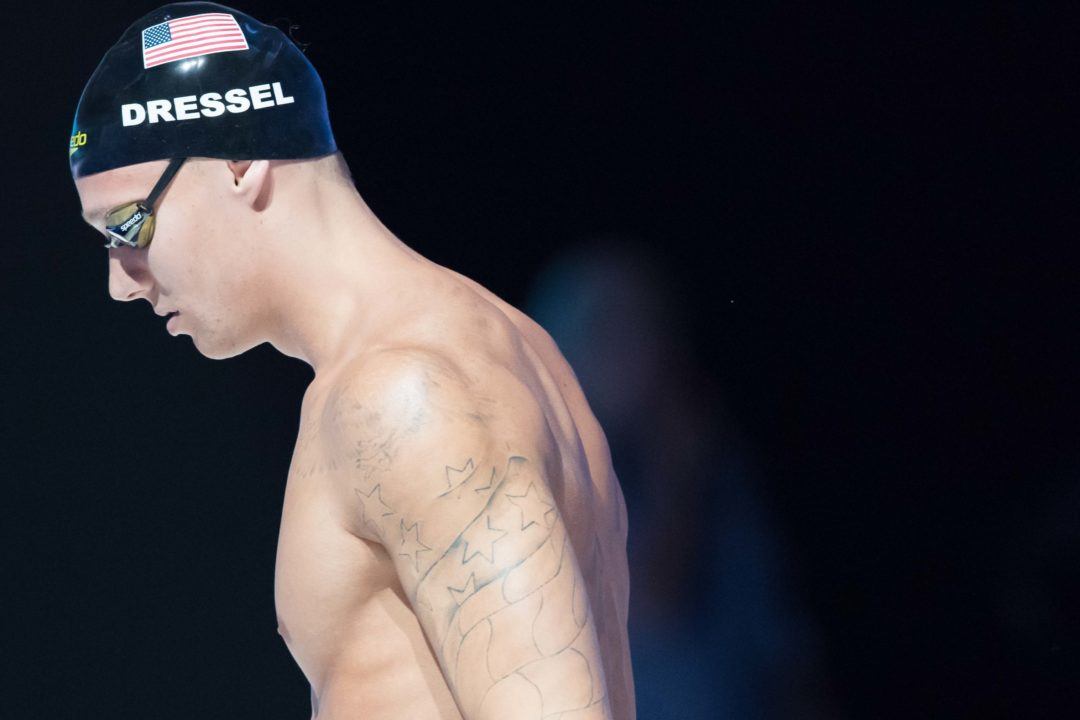 To see all of our 2017 Swammy Awards presented by TYR, click

Caeleb Dressel took it to a whole new level in 2017. A record-breaking NCAA season coupled with an incredible performance in the long course pool made him a lock for this Swammy award. Dressel came away with 3 individual NCAA titles at the 2017 NCAA Championships. He then qualified for the World Championships in 5 different events, including qualifying to swim the 800 free relay (which he opted out of) in the 200 free, with his performances at the U.S. Nationals over the summer. He went on to win several golds at Worlds.

Dressel set several American Records throughout the year, starting with the short course season. In the yards pool, he took down the American and NCAA Records in both the 100 free and 100 fly, and was just 2 hundredths shy of his own record as he pulled off a three-peat in the 50 free. Dressel had the crowd on its toes as he narrowly missed breaking 40 seconds in the 100 free, touching in 40.00. He also turned heads when he took down reigning Olympic champion and former Bolles teammate Joseph Schooling in the 100 fly, setting an American and NCAA Record in 43.58. Additionally, Dressel put up the fastest 50 free relay split ever with his 17.71 split on the Gators’ 200 free relay.

Over the summer, Dressel won 3 individual gold medals at the World Championships and was a finalist in 4 events. He set American Records in both sprint freestyles. His 21.15 in the 50 free was historic as the fastest swim ever done in textile and his 47.17 in the 100 free wasn’t far off the same honor. Dressel became the first man to break 50 seconds in textile in the 100 fly touching in 49.86 to miss Phelps’ World Record by just 4 hundredths as he picked up another gold on the back end of his 50 free-100 fly double. Along with his sprint free records, Dressel also set an American Record with a 22.76 in the 50 fly semifinals. He just missed the podium, touching 4th in the final.

Dressel was named the Male Swimmer of the Year at the 2017 Golden Goggle Awards and was also named FINA’s Male Swimmer of the Meet for his performance at Worlds. He earned an incredible 7 total gold medals at Worlds, making him the winningest swimmer ever at a single Worlds alongside Phelps. In addition to his individual titles, Dressel was a part of the winning men’s 400 free relay, men’s 400 medley relay, mixed 400 free relay, and mixed 400 medley relay. He became the first swimmer to ever win 3 Worlds golds in a single night, and was a part of 2 World Records with his roles on the mixed relays.

Dressel only won because Dean Farris declined the award

In other news: water, wet.

Dressel is not fastest 100 free textile