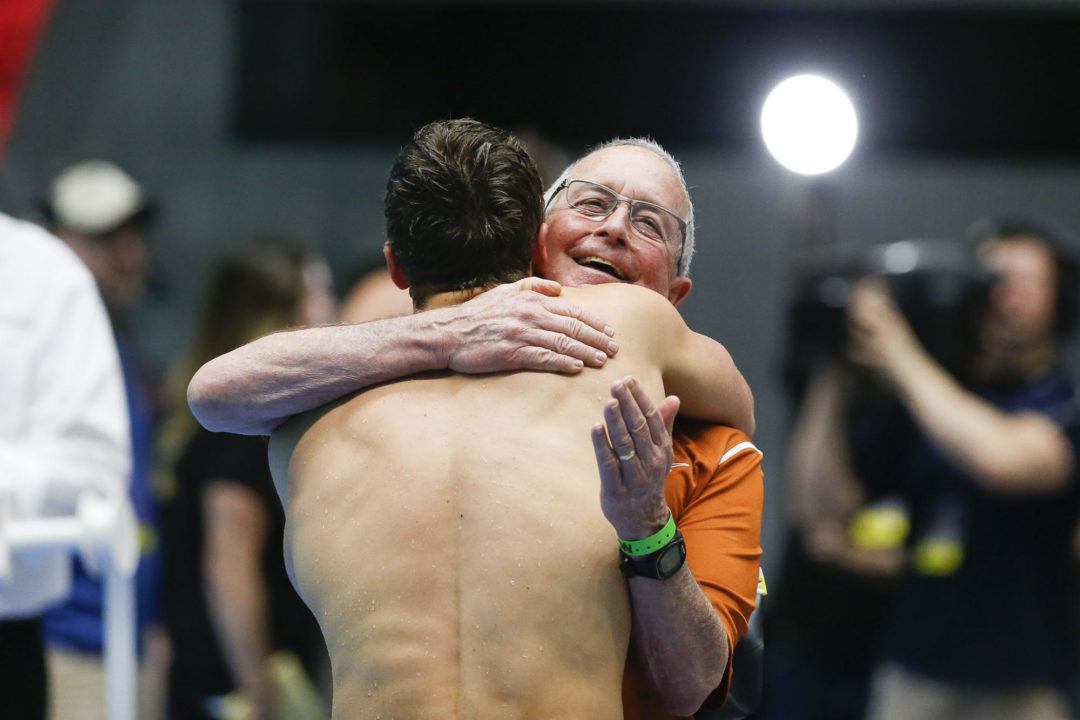 To see all of our 2017 Swammy Awards presented by TYR, click

Like the Energizer Bunny, University of Texas coach Eddie Reese just keeps going, and going, and going.  In 2017, the 76 year-old Reese completed his 39th season as the head coach of the Longhorns and guided the team to an unprecedented 13th NCAA title under his watch.

Coming off two consecutive NCAA titles and four swimmers returning from Olympic competition, the Longhorns got off to a bit to a bit of a slow start last fall.  Yet, the Texas men were pretty much firing on all cylinders by the time the big show rolled around in March.

In Indianapolis, Reese guided the power trio of Jack Conger, Will Licon, and Clark Smith to a combined six individual championships and four individual American & US Open records.  Those three seniors together earned individual 141.5 points, more than all except eleven teams scored at NCAAs.

Smith opened up the record assault by downing the last American Record that had survived the shiny suit era, the 500 Free.  Two days later he gutted out the win and earned the record in the 1650, in one of the most exiting NCAA races ever.  Licon capped off his senior campaign by going 3-for-3, including an US Open record in the 200 Breast.  Conger, who was probably the most well-known of the trio heading into college, finally got his first individual NCAA championship in the last individual swim of his career, the 200 fly, recapturing the US Open Record in the process.

But Reese and the rest of the Longhorn coaching staff engineered key contributions from many other swimmers besides those seniors.  John Shebat led off the record-breaking medley relays, picked up two 2nd-place finishes in the backstrokes, and became the fastest Longhorn ever in both of those events.  Jonathan Roberts stealthily made three A Finals.  Guys like Brett Ringgold played a key role on relays, as the Longhorns took down the US Open Record in the 200 medley, 400 medley, and 400 free relays, showing the extent to which this championship was truly a team effort.

We haven’t yet even mentioned Townley Haas and Joseph Schooling.  The latter had one of those “off” years that everyone dreams about: 3rd place NCAA finish in the 50 free, NCAA Runner-up in the 100 fly with the 2nd-fastest swim ever, and a bronze medal in the 100 fly at Worlds.

Haas, meanwhile, might be a great example of Reese’s tendency to trust his swimmers.  Haas scored in the mile as a freshman (in addition to his victories in the 200 and 500 free), but no made secret of his desire to move down to the 100.  This year, Haas parlayed Reese’s trust into a win in the 100 free B-final and a blazing fast split on the aforementioned 400 free relay (not to mention a 2nd-straight victory in the 200 free).  Haas went on to earn silver in the 200 free at Worlds, and continued his transition to the sprint side of things with three 47-second relay spilts in Budapest, earning gold medals for the 4×100 free, mixed free, and medley relays.

Sure, you could try to argue that any coach could win NCAAs with the talent that Reese has to work with.  Undoubtedly many NCAA coaches, some of them quite unsung, continually do a great job of developing swimmers.  Yet, there is a reason that top-notch swimmers continue to flock to Austin, and it ain’t just for the local barbecue joints.  With solid performances already this year by freshmen, an endless supply of corny jokes and seemingly boundless energy, Reese and Texas show no signs of slowing down anytime soon.

Gregg Troy – Florida: Two words — Caeleb Dressel.  Despite many fans who doubted Florida’s ability to develop a sprinter of Dressel’s caliber, the junior solidified his reputation as not only one of the fastest NCAA swimmers ever (three US Open Records at NCAAs and three individual gold medals at Worlds), but one of the most versatile ever, as he wrapped up 2017 with a 1:40.61 200 IM.  Meanwhile, Mark Szaranek unexpectedly tied for the win in the 200 IM, and Troy coaxed enough out of the rest of his team to finish 22 points ahead of NC State for 3rd at NCAAs.

Ted Knapp – Stanford: It’s taken a few years to get rolling under Knapp, but Stanford seems to be getting on track to challenge for a national championship in the next few years.  Like any other team, credit here needs to go to the whole staff — assistant coach Jeff Kostoff may have the most formidable distance crew in the country — but this was a well-rounded team, as the Cardinal quietly scored in every event except the breaststrokes, and was sneaky fast in the medley relays despite not having any “big” names.

Kris Kubik retired 2 years ago and we are already ready to vote Eddie as best in swimming? Shouldn’t we wait a few more years until he actually proves he is any good?

Ladies and gentlemen, I have been out-trolled.

not even Dave Durden as an honorable mention

Don’t count out Tennessee. In aa few years they will be there

I like the optimism about Stanford and winning a national championship, but I just don’t see anyone besides Cal or Texas winning for the next few years