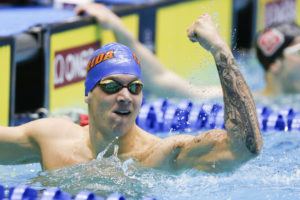 As reported by Robert Gibbs:

Wisconsin’s Matt Hutchins had the fastest time from the early heats, taking the heat 4 with a 14:31.19.  That’s almost two seconds faster than the time from this 3rd place finish last year, and faster than last year’s winning time.  Stanford freshman Grant Shoults knocked over fourteen seconds off his seed time with a 14:35.82 out of heat 3.  Florida senior Mitch D’Arrigo was the only other man under 14:40 so far, touching in 14:38.40 in the same heat as Hutchins.

The final heat promised to be exciting, as it featured a loaded field, and sure enough this was, as announcer Sam Kendriks called it, “the greatest 1650 in history.”  Sure enough, Texas senior Clark Smith and Northwestern senior Jordan Wilimovsky, both USA Olympians, were ahead of US Open and American record pace at the 500, but PJ Ransford and Felix Auboeck kept it close, with Ransford taking the lead by the halfway point and moving ahead of the record pace himself.

At the 1000, Ransford was a body length ahead of the field and still ahead of pace, with Smith, Auboeck and Wilimovsky close together and battling for 2nd.  The leaders would continue to hold that pattern for a few more laps, while South Carolina’s Akaram Mahmoud began to move up on that group out of lane eight.

Wilimovsky took the lead at 1300 and was a second under record pace at the 1350.   By the 1400 mark, all five of the aforementioned men were in a line together, and it looked like the race would belong to whomever could push it coming up.  Ransford began to fall off the pace, but the final were laps were absolutely insane, with the lead changing back and forth, but Smith took the lead with about a 100 to go, and held on to the lead, touching in 14:22.41 and setting a new US Open, American, and NCAA record.  Smith was barely able to climb out of the pool and had to be helped off the deck.

Auboeck, Mahmoud, and Wilimovsky were all under the previous mark of 14:23.52, which was set by Connor Jaeger at the 2014 USA Winter National Championships.

Yes!!!! Thank you so much for posting this!!

Thx for posting. The crowd was electric! The #1 NCAA swim ever.

That was my first reaction as well, but no remembering Chris Swanson’s incredible finish last year, i still have to say that was the best mile race I’ve ever seen. He received the longest ovation I’ve ever seen for a swimmer. This year’s race was by far the fastest ever, and from beginning to end the most exciting.

Vote Up120Vote Down Reply
JP input is too short

dressel 40.00 free? great races all around…hard to choose just one!

Vote Up150Vote Down Reply
JP input is too short

It’s definitely not an easy choice!

And the announcing by Sam K. was awesome! Camera work was great – no zooming in!!