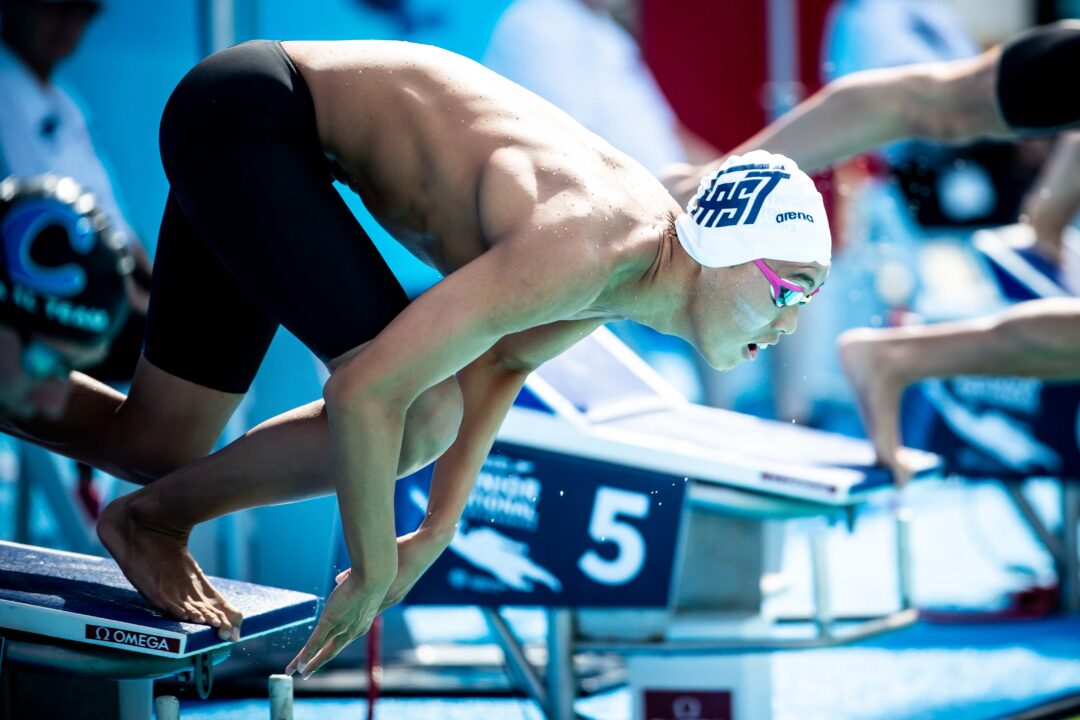 #6-ranked recruit Matthew Chai stays home in the state of California in one of our top 16 recruiting classes nationwide. Archive photo via Jack Spitser/Spitser Photography

It’s a huge class for Princeton to vault the Ivy League program ahead of our honorable mentions and into the top 16. The Tigers managed to snag one of our top 20 recruits: 46.8/1:43.6 butterflyer Conor McKenna out of Texas. He’s a fast riser, cutting more than a full second in both butterfly events over his senior year. He’s also a 1:37 200 freestyler who should swim lots of relays for Princeton.

Speaking of the relays, Brazilian sprinter Lucas Todoras should also contribute there – he’s 50.2 in the long course 100 free, converting roughly to 43.9. And California high schooler Mitchell Schott is a 1:35.4 200 freestyler who should boost the 800 free relay.

Danish IMer Lucas Strobek has short course meters times that roughly convert to 1:47.3 and 3:48 in the short course yards IMs.

Cal’s class is highlighted by the best 500 freestyler in a really good distance free class across the nation. Matthew Chai stays home in the state of California, bringing in a 4:15.9 time in the 500 that would have been within a second of an NCAA invite last year. He’s also 14:45 in the mile (which would have scored last year) and has range down to 1:37.0 in the 200 free.

Tan entered Singapore’s National Service back in January, so his status for the season is currently unclear.

Luke Rodarte is a big breaststroke add from Cal Lutheran, having won the Division III title last season in the 100 breast (52.71), and Bora Unalmis brings depth across the 500 free, 200 back and 400 IM from Michigan.

Georgia has a massive class incoming, headed by one key domestic recruit and one great international.

Sam Powe is one of the better backstroke recruits in the nation within this class, going 46.9/1:41.9 out of high school. He’s also 1:36.7 in the 200 free and could contribute on a relay there at some point. Israeli breaststroker Kristian Pitshugin has been 1:00.3/2:16.3 in long course meters. That 100 time, in particular, is no joke. It roughly converts to 52.3 and makes him one of the better incoming freshman breaststrokers in the NCAA.

The rest of the class will need some development, but there are plenty of names to keep an eye on, including 20-point sprinters Aaron Seymour, Cooper Cook and Tyler Schroeder. Diver Kevin Li transfers in from Alabama, where he was an SEC finalist last year on 1-meter. He has one year of eligibility remaining.

Nationally, this whole freshman class is really strong in distance freestyle, and Levi Sandidge is one of the best prospects in that great group. His 14:49 mile would have scored at NCAAs last year, and he’s also 4:24 in the 500 free – a ways from NCAA scoring level, but in an event where we tend to see a lot of time drops from the high school level to the college realm.

Wisconsin’s big addition is European Junior Championships silver medalist Dominik Mark Torok out of Hungary. He projects as an elite-level IMer around the level of the best domestic recruits in the class. (For reference, Torok’s best times of 1:59.0/4:17.4 in long course meters are very comparable to #1 domestic recruit Baylor Nelson’s 1:59.1/4:16.4). For rough conversions to short course yards, Torok sits at 1:42.9/3:43.4, both right around NCAA invite level. He’s also a 1:58.4 long course 200 flyer, roughly converting to 1:43.5.

Cooper Scharff is a 47.9/1:44.3 backstroker who should also be a key addition. He was in our “best of the rest” section of recruits just outside the top 20 nationwide.

Cal at number 15 is not worrying at all. They will emerge at the top once again. That is for sure.

They forgot my boy Dan Kim

So with the 7 additions to the Cal list, should they be moved up over the two ahead of them?

Pretty neat there is another high level D3 swimmer going to a D1 school again in Luke Rodarte. Also interesting that they are a breaststroker as well.

A few years ago, Rodarte wasn’t even swimming – he was a downhill skier. Just a natural.

Zach tan also has to go to military service

Isn’t he from Singapore?