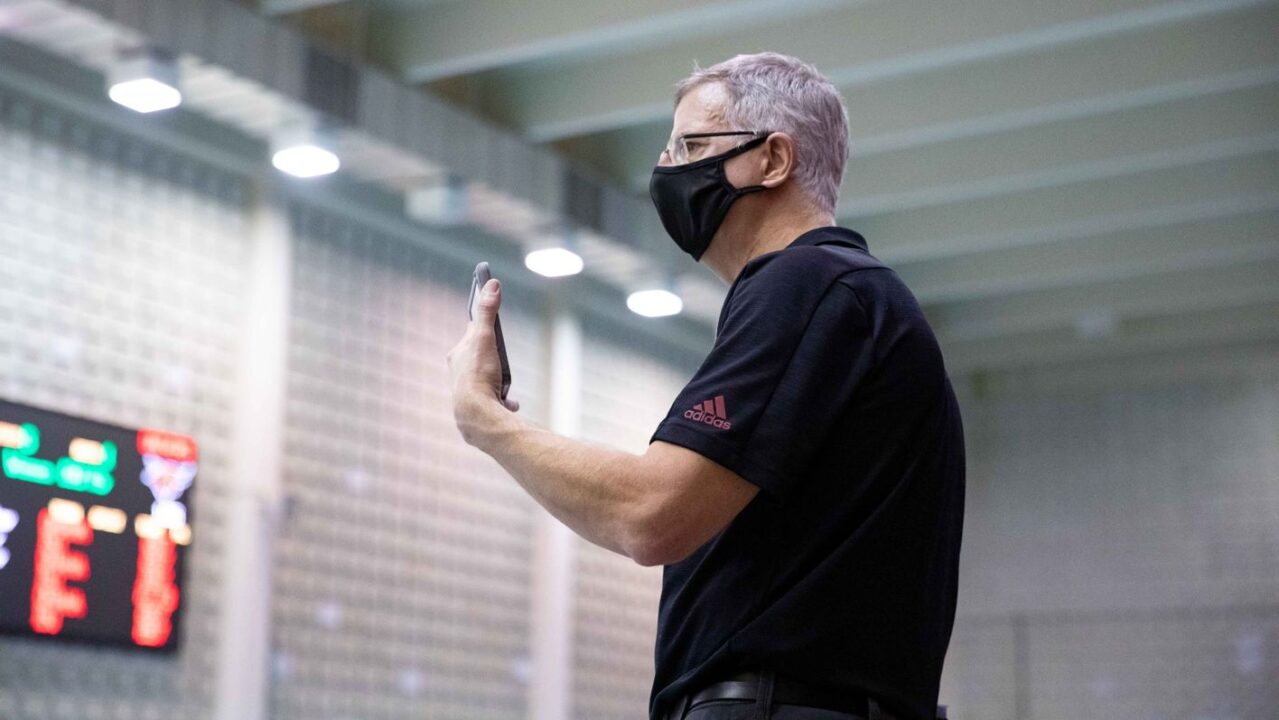 Samland is the only head coach the program has ever known, having taken over the women's program at its inception back in 1997. Current photo via Omaha Athletics

Todd Samland, the only head coach the University of Nebraska Omaha swim & dive team has ever known, has resigned from his post after nearly 25 years at the helm.

Samland’s abrupt resignation comes just a few weeks into the 2022-23 season, with the Mavericks set to compete for the first time on Sept. 30.

Team members were made aware of the news on Tuesday.

Jessica Hessel will take over as the interim head coach for both the men’s and women’s teams for the remainder of the season. Hessel has been on the program’s coaching staff for the past seven seasons, including the last two as an associate head coach.

Samland began coaching the Omaha women’s swim & dive team at its inception in 1997, and added the role of men’s head coach when the program was added in 2020.

“I want to express my gratitude to the athletic department for the support of our program over the past 24 years,” Samland said, according to the UNO release. “I would like to especially thank (former athletic director) Connie Claussen for hiring me and believing in me.

“What I have enjoyed most is the people I have met through coaching – athletes, staff, and coaches. The athletes I have coached over the years, and their families, have truly been a blessing in my life and I cherish the relationships that have been formed over the years and look forward to staying connected to many of them.”

Samland indicated he plans on venturing down a new career path in the future.

“Now it is time to take a step in another direction, my family and I are looking forward to our next chapter as I dive into the private sector for my next career.”

A school spokesperson declined to offer any information behind the reasoning for the resignation coming so early into the season.

Samland is not the first Division I head coach to step down early into the 2022-23 season. Jim Halliburton resigned from Saint Louis earlier this month to take a job at WashU, and Tulane head coach Leah Stancil also left that program in late August to take an assistant position at nearby LSU.

During his 24-year run with the program, Samland led the Maverick women to plenty of success, including a third-place finish at the Summit League Championships last season.

Overall, he coached five NCAA Division II champions during his career, and his athletes made 13 straight appearances at the NCAAs from 1999 to 2011. The team’s highest-ever finish at nationals came in 2006, when Samland helped propel the Omaha women to a fifth-place showing.

Since joining the Summit League in 2012-13 (and reclassifying as a D1 school), the Mavs have finished as high as second (2017-18) at the conference championships, and Samland has been named the Summit League Women’s Swimming Coach of the Year on two occasions.

In the men’s team’s first season of competition last year, the squad placed fourth at the Summit League Championships.

“Coach Samland is synonymous with swimming and diving in the Omaha community, and our programs performed at a high level under his leadership,” said Omaha Vice Chancellor and Director of Athletics Alex Dowell.

“On behalf of Omaha Athletics and the University of Nebraska at Omaha, I want to thank Coach Samland for his dedication to swimming and diving at Omaha, and we wish him well in his future endeavors.”

Stepping into Samland’s shoes, at least for the remainder of the season, will be one of his former swimmers.

Hessel was a 10-time All-American swimmer under Samland during her athletic career (2004-08), including anchoring the team’s victorious 400 free relay at the 2008 NCAA Division II Championships.

After graduating from UNO in 2010 and earning her master’s degree in sports administration from Henderson State in 2012, when she also worked as a graduate assistant coach with the swim team, Hessel pursued coaching full-time. She spent three years at Truman, including the last season as an associate head coach, before returning to her alma mater in 2015.

The UNO swim team will compete for the first time next Friday, Sept. 30, hosting St. Cloud State, though the meet will take place at Millard West High School. Their primary facility, H&K Pool, is currently under construction.

We had the same thing at U of Tampa Coach has been there a long time and its a real TOXIC environment with the team . He had a foreign swimming last year he told him to go back to his F——K in country.He lies about money to the swimmers. there are safe sport issues (Coaches heavily flirting with swimmers making females very uncomfortable ) a lot of complaints to AD but he does nothing.

The A/D should do a survey of the SwimTeam and other teams to get a feel of what’s going on he has been there 22 years to long .He takes things for granted you have to hold people accountable

As a former parent of a swimmer, I saw the deterioration firsthand. This was best for the program, it was time to make a change. Looked from the bleachers like he was mailing it in and was ready to check out a few years ago.

The lack of supportive comments for this guy and the amount of up and down votes in this comment section should tell you everything there is to know about this guy. He was a divisive figure to say the least and the way he treated the women’s team was out of control for far too long. He should have moved on years ago.

Nonsense. The people who support him aren’t on here touting his praise (as is always the case). Only the detractors (and there aren’t many) are on here and the arguments against him are weak. The up and down arrows mean nada and are not close to a reflection on what the masses think.

Sad for the whole team! Never fun for a team to have to go through that. Hope they all come out on the other side feeling grateful for what they still have. Dividing teams based on individual perspective and assumptions is never productive for anyone!

Sad for the coach. He lost his reputation and career (after 25 years) over holding a few people accountable. There was no pattern of behavior issues w coach Samland and a few people complain bc he was mean and people felt slighted. Career over.

And there it is…..can’t hold people accountable these days.

I am a captain for UNO’s swim team, I would like to say that we don’t know who the people are making these comments. We, both women and men, are a unified front. We love working together and are excited to continue this season with passion and respect for this sport and program as we have in the past and will continue to do so in the years following.

I am a captain for UNO’s swim team, I would like to say that we don’t know who are making these comments. We, both women and men, are a unified front. We love working together and are excited to continue this season with passion and respect for this sport and program as we have in the past and will continue to do so in the years following.

I appreciated that he was wearing a mask in the photo. Immediate positive impression…no matter when it was taken.

I often associate good coaching with mask wearing as well!

He had to resign because the girls team complained that he was being too tough on them even though the mens team loved him. He’s a great coach and better person. The girls team is just jealous that the guys had more success than them last season. Sad moment.

So much unsubstantiated opinion in this post… another sad moment on the ability to people to disparage a team or individual without any fact.

Interesting point of view considering the men’s team placed lower than the women’s team at their conference championship. Can’t please less than 50% of your team and be considered a ‘great’ coach. Clearly there was more going on than what was mentioned in this post.

This is literally the most disgusting and disrespectful thing you could comment. The WOMENS team is not jealous the guys had more success. The women placed higher than the men at conference and had more success in the classroom with the fourth highest gpa in the nation. Maybe you should learn the facts before you comment on something like this. You don’t know what happened during the investigation so until you have some real facts please stay respectful of both teams, thanks!

I mean, y’all know this is probably a member of the men’s team right? He probably knows more than you’re giving him credit for.

It’s still a really bad look for the men’s team, but…I don’t think your clapback is quite right.

it just seems disrespectful for the men to blame the women and try and cause a divide when there shouldn’t be one.

were you part of the investigation? did you hear everything that went down and why it ACTUALLY started?

No but I didn’t leave the comment by Sad either. Talk to him, not to me. Pretending like a member of the men’s team doesn’t know why it happened just isn’t a strong clapback.

I’d stick with “a member of the men’s team is mischaracterizing the investigation.” That would be a much stronger clapback.

I agree with your first comment though! Y’all should discuss that offline though. This doesn’t look good for either group.

Lemme guess…….women’s team swimmer complained coach was abusive……I should trademark that as a headline and get rich.

Ooooh do tell. What was/is the investigation you dropped knowledge on all about? Inquiring minds want to know!

The article said nothing about an investigation- someone please spill the tea.

I don’t understand why comments like this are necessary. Extremely disrespectful.

Todd was part of his team for 25 years and started 2 programs, his athletic administration wouldn’t risk damaging the school’s reputation by asking him to resign over some petty complaints. If you don’t know what happened then there is no need to make accusations or blame the women’s team. Instead, maybe try respecting these student-athletes by showing them support instead of trying to tear them down.

Make a statement on Facebook/instagram, and then post the link here. Bet you won’t!