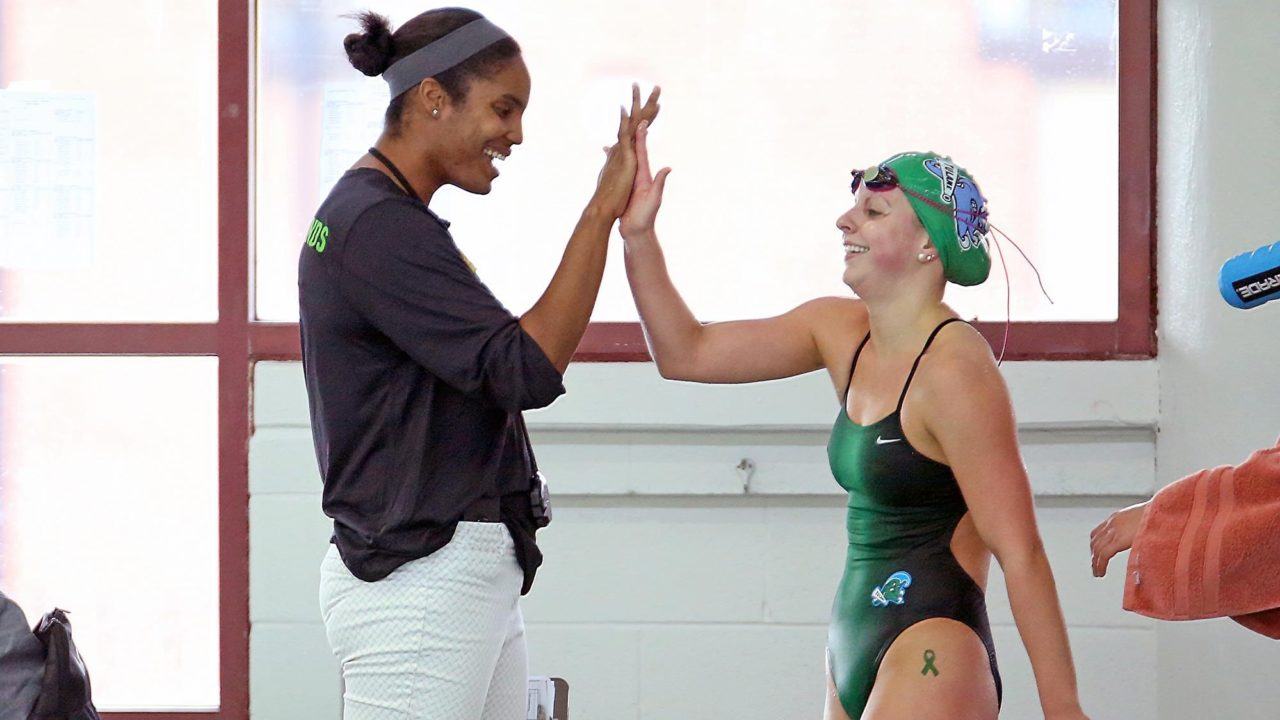 After four years leading the women-only swimming program at Tulane, two-time Olympian Leah Stancil has resigned as head coach to take an assistant job one hour up the road at LSU, sources tell SwimSwam.

The previous assistant, Kosuke Kojima, left the program in April along with head diving coach John Sirmon. Tulane has faced challenges, including its on-campus pool being closed since the start of the COVID-19 pandemic in March of 2020. Two of the team’s best swimmers, All-American Lilly Byrne and AAC runner-up Christiana Williams, transferred out of the program. Reinforcements are on their way, though, as Isabella Lojewski will arrive in the fall with times that already rank her among the best swimmers in Green Wave history.

The Tulane women finished 3rd out of 5 teams at the 2022 AAC Championship meet, behind Houston and SMU but ahead of Cincinnati and a revived East Carolina program. The Green Wave placed 4th in 2021, 5th in 2020, and 4th in 2019.

Meanwhile, it’s been quite a summer for the Tigers, who received a huge boost in June when Canadian star Maggie MacNeil announced her plans to reunite with former Michigan coach Rick Bishop for her fifth year of eligibility in Baton Rouge. Then last week, World Junior champion Jade Hannah revealed that she was transferring from USC and joining MacNeil at LSU.

SEC titles in MacNeil’s three top individual events would have boosted LSU from 8th place (541 points) to 6th (637 points) last season – and that’s not factoring in her relay swims. At the NCAA Championships, where the LSU women scored eight points last season (placing 32nd out of 39 teams), the addition of MacNeil will likely be enough to catapult the Tigers into the top 20 just off her individual swims, let alone her relay impact.

Representing Barbados at the 1996 Summer Games in Atlanta, Stancil (then Leah Martindale) placed fifth in the 50 freestyle (25.46), becoming the first Black woman in history to reach the Olympic final of that event.

If I understand correctly Stancil fired the assistant coach, failed to find a replacement dive coach, then jumped ship days before the start of semester? I understand the situation with the facilities is challenging (and even more challenging for the athletes that actually have to train in them), but the decision to leave right before season seems incredibly unprofessional. Tulane’s AD must be kicking himself for letting her get rid of Dr. Kojima; he would have made a very competent and qualified head coach for the program.

MANY college coaches could give a rats A if it means they can “climb the ladder”. Recruits, beware.

Coach Bishop seems to be getting the program on the right track with solid athletes and great coaches. It’s time for the LSU Athletic Department to step up and do something about the facility. The pool at the Nat is one of the fastest pools in the country. It needs a respectable building around it. Some big renovations to the Nat to make it capable of hosting big meets like SECs would turn on recruiting in a big way. Show these young swimmers a nice place to call home and then show them Saturday Night in Death Valley and they’ll be sold! Geaux Tigers!

Hope they give Greyson the reigns. Hiring a coach at this time is not an ideal situation. You have a young coach right on deck.

I don’t know Greyson personally, so don’t take this as a judgement on him, but this is not a great situation. His entirety of collegiate coaching experience is one season as a volunteer assistant at Kansas. Besides the lack of on-deck experience, that means a huge lack of experience in the administrative side of college swimming, which is not a given. Filing paperwork, dealing with travel, planning recruiting – that’s a lot to take on while flying solo in your first full-time collegiate coaching gig. Add to it the Tulane situation with the pool, and this is going to be a challenging season for that program.

Add to the pile that the diving coach “left” in the off-season as well,… Read more »

I have mixed feelings about this. Coach Stancil is a cancer survivor who was coaching an underfunded program that doesn’t have an on campus pool. Add to that, the challenge of being a minority, female head coach brings its own pressures. They drove a couple of hours a day to practice locations. My sense is that Tulane is having second thoughts about the timing and financial burden of the extensive pool rebuild.

I feel for the swimmers too. They’ve been going through adverse training conditions, in addition to relocating because of a hurricane. Now, the rug literally gets yanked at the beginning of a school year. This could have been handled better.

The timing of this is brutal for that program. I worry that administrators (who clearly don’t care about this program if their pool still isn’t back up) will look to just cut swimming. Hope that’s not the case for everyone around this program.

Swimmers can leave whenever they like as well via the transfer portal, and it doesn’t always leave the coach in a great situation. The program and school must be a good fit for the coach as well. Good or bad, it is what it is.

It’s not that easy for swimmers when most of the colleges are already in session and have full rosters. Absolutely horrible timing, all swimmers are moved in and started their first classes this morning. Next week they will start practices without head coach!

Really? A scholarship swimmer can find a transfer destination the week before a semester starts? Sounds like a coach or AD talking…

Not even a week before. Swimmers literally were informed yesterday, a day before their first classes.

Wow. She fired the diving coach, fired the assistant coach, then resigned days before the fall semester at a school with no pool. Good luck with that, Tulane.

I feel worse for the LSU athletes that now have to deal with her. At the very least, the Tulane girls are free from her terror now! I guess Stancil was never taught that you should leave places better than you found them. She burnt the program to the ground and then said good luck cleaning that up!