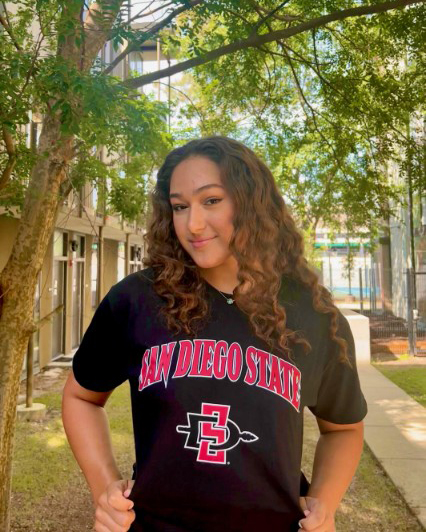 Christiana Williams, who recently finished her sophomore year at Tulane University, has announced her transfer to San Diego State for the fall. She will have two years of eligibility remaining, plus the bonus COVID-19 year, for the Aztecs.

Williams told SwimSwam, “I am so excited to announce my commitment to San Diego State University! I will always be grateful for my time here at Tulane and I’m so excited for my future as an Aztec. I’d like to thank Coach Shrader and Coach Allnut for being so amazing in the tough process that is transferring. I’m so excited for this next part of my journey… Go Aztecs!”

Williams’ departure from New Orleans is a significant blow to the Green Wave program, as she was Tulane’s top 100 and 200 breaststroker last season. She also was the American Athletic Conference’s runner-up in both breaststroke races this year and also finished in the B final of the 200 IM.

Williams has seen significant improvement over her first two years of college swimming, dropping 2 seconds in her 100 breast and nearly 5 seconds in her 200 breast, but she leaves a Tulane program that has been enduring hardship the last several seasons. Tulane’s on-campus pool has been closed since the start of the COVID-19 due to “scheduled maintenance.” The continued closure of the campus pool has meant 10 hours of weekly travel to train at an off-campus location, which has put a strain on the student-athletes.

Upon her arrival in San Diego, Williams projects to have a massive impact for the Aztec program. Both her 100 and 200 breast would have scored in A final at last year’s Mountain West Championships, events that the Aztecs dominated last season en route to the conference championship. Senior Klara Thormalm led the way for the Aztec breaststroke group last year, qualifying for the NCAA Championships in both events. Williams will help fill the void left by Thormalm’s graduation this spring.

Oops, I read acc not aac