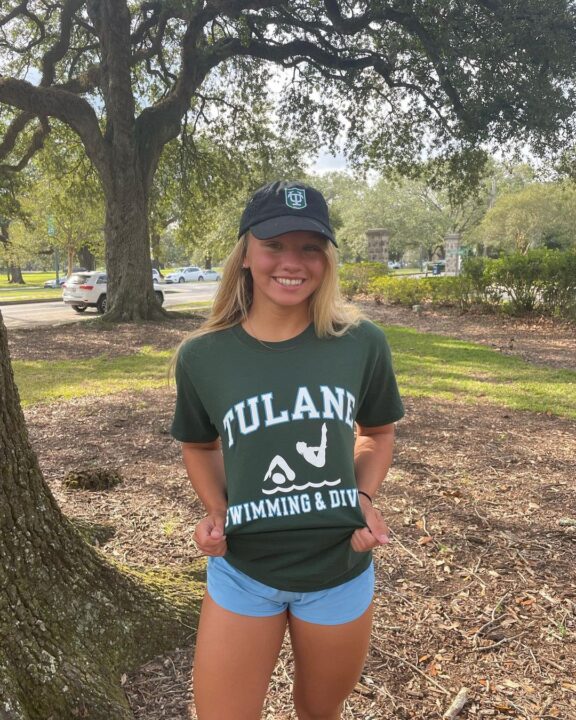 Miguel Rojas Newman helped Bolles win their 2021 State Championship as he won two individual events at the state meet. He will join the Hokies in fall 2022.

After initially being one of the first members of the class of 2022 to announce their commitment to the University of Florida over a year ago, Isabella (Bella) Lojewski has now announced that she will be heading to Tulane University following the coaching changes at Florida. The Winter Park High School Senior swims for the Blue Dolfins out of Oviedo, Florida.

Just a few weeks ago Lojewski was a finalist in both the 200 free and 100 fly at the 2021 FHSAA Florida 4A State Swimming and Diving Championships. Her top finish came in the fly where, after swimming a lifetime best of 55.35 during prelims, she dropped even more time during finals to touch in 55.35 to take fourth. In the 200 free she won the B-final in 1:51.15, which would have been fast enough to take fifth in the A-final. She also added a new best time in the 100 free while leading off her schools relay, swimming the first leg of the race in 50.91.

A member of Poland’s Junior National Team, Lojewski traveled to Europe over the summer to compete at the European Junior Championships in Rome, Italy. She competed in three events, the 100 and 200 fly, as well as the 400 free. Her highest finish came in the 200 fly where she grabbed 28th in 2:20.60.

Lojewski will be a huge addition to a Tulane team coming off of a season that saw them finish 4th out of 4 teams at the 2021 American Athletic Conference Championships. While the team was able to put two finalists in the 1oo and 1 in the 200, none were able to finish higher than 6th place. That sixth-place finish came from Kate Amar, who is currently in her junior year with the team. With her best times, Lojewski would have finished 6th in both of the fly races.

With her best times, Lojewski would have been an A-finalist at the 2021 AAC Championships in both butterfly events as well as the 100 free. In the 200 free, she would have missed the A-final by just tenths of a second.

The American Athletic Conference is currently a part of the conference shake-up that has seen schools across the country announced that they intend to change conferences. While Tulane has remained in the AAC, Houston and Cincinnati have both announced that they will be joining the Big-12 as early as 2023. Due to this, the conference is expected to add Florida Atlantic, North Texas, and Rice. Those teams are expected to join the AAC by 2024, meaning there will be a big change in competition between when Lojewski gets to Tulane and when she graduates.