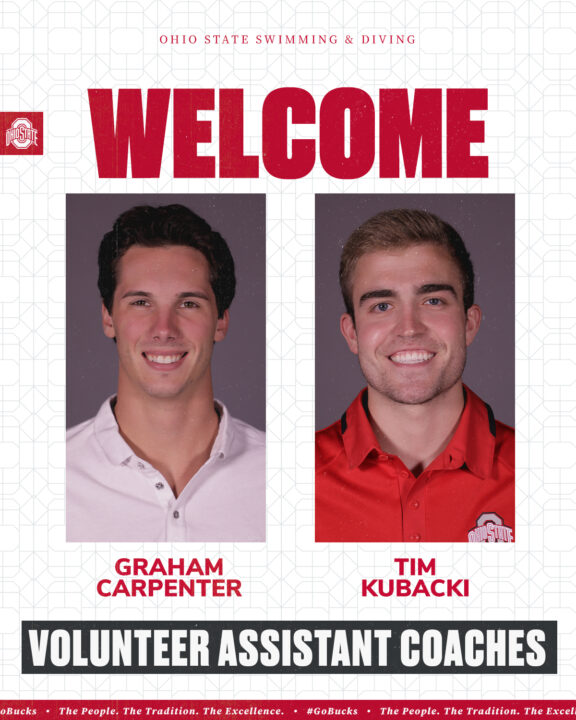 One of the highest performing programs in the Big Ten over the past few years, Ohio State saw a ton of staff turnover this summer. Current photo via Ohio State Athletics

Ohio State University has officially announced two volunteer assistant coaches for the rapidly approaching 2022-2023 season. The Buckeyes have welcomed Graham Carpenter and Tim Kubacki to the swimming & diving staff, rounding out their staff rebuild following the significant turnover the program saw over the summer.

Carpenter comes to Ohio State with a solid background of college coaching experience, including a head coaching stint. He began his coaching career at Anderson University, a Division III affiliated university located in Anderson, IN. He served as a volunteer assistant for the Ravens during the 2019-2020 season. Carpenter was then named interim head coach of Anderson at the beginning of the 2020-2021 season. Following his 2-year stint at Anderson, Carpenter moved to John Carroll University in University Heights, OH for the 2021-2022 season. He served as a graduate assistant at John Carroll.

A native of Columbus, Carpenter expressed his excitement to return home to continue his coaching career. He said in part: “Having grown up in Columbus, to come home and be a part of the Ohio State culture is really a dream come true for me. I am beyond excited to share the deck with Coaches Dorenkott, Hulme, Gayo, Schrader, Trace and my counterpart, Tim Kubacki.”

Tim Kubacki comes to the Buckeyes following an illustrious swimming career at Cleveland State University, located a few hours away, in Cleveland, OH. Kubacki was a 4-time Horizon League Champion and was named the 2022 Horizon League Athlete of the Year. He’s also an Ohio native, having grown up in Youngstown. Kubacki currently holds Cleveland State program records in the men’s 200 IM and 500 free.

Speaking on the additions, Ohio State head coach Bill Dorenkott said of Carpenter and Kubacki, “Tim and Graham have the human qualities that make a difference in this profession: an ability to connect with young people, impeccable character and a level of competence to help our student-athletes reach their goals.”

Congrats to both as they both seem happy but I don’t really get this move for Carpenter, seems like a downward move to be a volunteer with the amount of experience he has

Because it’s THE Ohio State University

If only that paid the bills.

Kubacki was a class act student-athlete(AND FAST!) at CSU. Excited to see someone with his character to join the coaching world.

Carpenter is one of the best young coaches in the business. His addition is huge for this staff