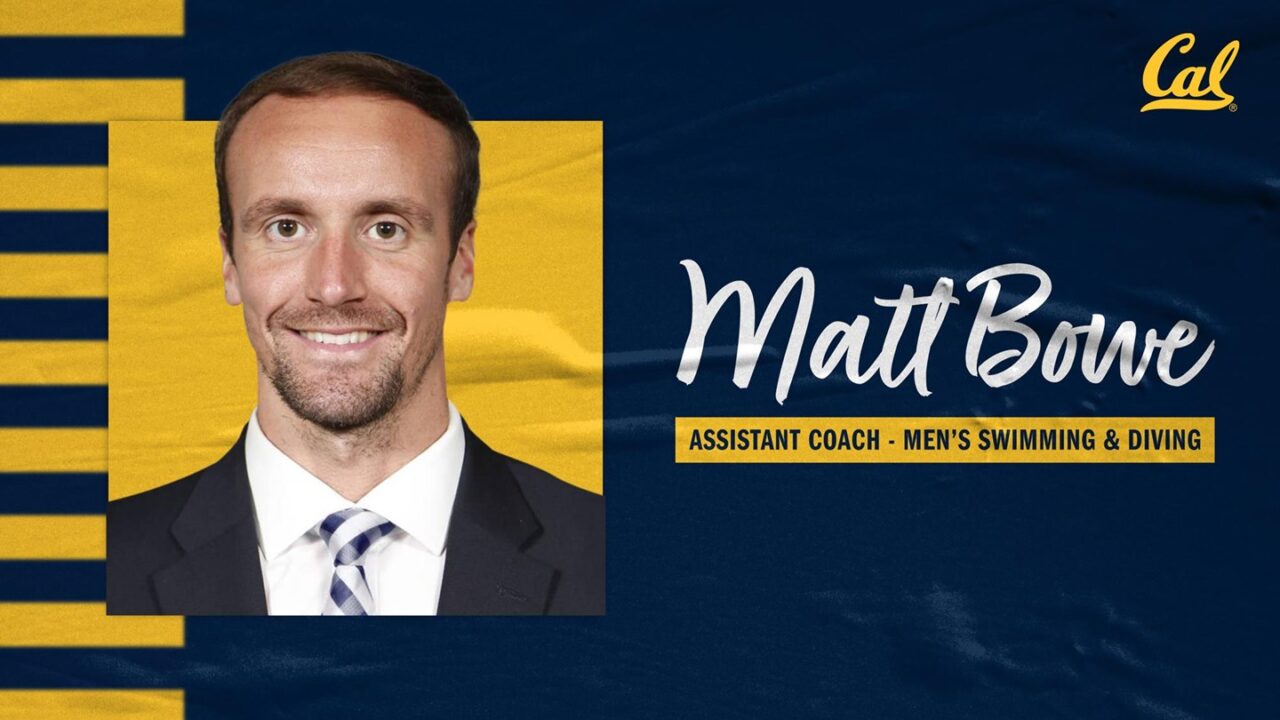 Bowe is coming off a successful five-year run with the Buckeyes, serving as a senior associate head coach in the last two seasons. Current photo via Cal Athletics

Matt joins our staff as an assistant coach following a successful five-year stretch at Ohio State.https://t.co/qZEnyTn0UH

During his time at OSU, Bowe helped propel the Buckeyes to new heights, including aiding the men’s team to a seventh-place finish at the NCAA Championships this past season, their highest since 1996.

“After spending time with Matt and his family through the interview process, it felt like the perfect fit for where we are as a program and where Matt’s skill set is as both a coach and a person,” Durden said.

“His experience working with Olympic medalists, world-record holders and All-Americans will mesh with where our program is currently and where it is going in the future. Our guys are going to benefit from Matt in and out of the pool in the best ways possible and we can’t wait to get Matt, his wife Lila, and their one-year-old daughter Indie, on campus.”

Bowe will take over the assistant position at Cal from Chase Kreitler, who was named the new head coach at the University of Pittsburgh last month.

Last season, while Kreitler went on paternity leave, David Marsh filled in on the Cal staff.

Bowe was also the primary coach for Hunter Armstrong, who broke out to make the U.S. Olympic team last summer, winning a relay gold medal before having a standout showing at the 2022 U.S. Trials last month, setting a world record in the men’s 50 backstroke and also winning the 100 back.

Given that Cal has a rich history of backstroke success, including being the training bases of the man Armstrong out-dueled at the Trials last month, four-time Olympic gold medalist Ryan Murphy, it begs the question if Armstrong would consider following Bowe to Berkeley.

“I’d like to thank Dave Durden for the opportunity to join the Cal men’s swimming & diving program,” Bowe said. “It’s an honor to be a part of such a prestigious institution and I’m excited to contribute to the championship-winning culture that Dave has created.”

“Cal has a rich tradition of excellence in the classroom, at the NCAA Championships and at the Olympic Games,” Bowe continued. “With great opportunity comes great responsibility and I can’t wait to help our student-athletes set high goals and strive to achieve them.”

In addition to that seventh-place finish at NCAAs this past season, the Buckeye men were also the most-improved team at the 2019 National Championships under Bowe, placing ninth after finishing 28th the season prior. Bowe coached a total of 10 NCAA All-Americans, seven Big Ten champions and 16 team-record holders during his OSU tenure.

Prior to joining Ohio State, Bowe spent the 2016-17 season as an assistant coach at Indiana, helping the Hoosier men to the Big Ten Championship title.

Before going to Bloomington, Bowe served as an assistant coach at Eastern Michigan for three seasons (2013-16), guiding the men’s team to back-to-back MAC titles in 2015 and 2016.

A native of Silecroft in Cumbria, England, Bowe got his coaching start at his alma mater, Loughborough University, and also spent time as an assistant coach at the Great Britain National Centre in Loughborough from 2009 to 2012. That included him coaching multi-time world champion Liam Tancock and worlds medalist Fran Halsall.

As an athlete, Bowe represented Great Britain multiple times on the international stage, including winning a silver medal in the men’s 4×100 medley relay at the 2006 Commonwealth Games (swimming fly) and a bronze medal at the European Championships that same year. Bowe was also a finalist in the 100  fly at the World University Games in Bangkok (2007) and Belgrade (2009), and swam as a finalist in the 2007 World Championships in Melbourne.

Bowe graduated from Loughborough University in 2009 with a BSc First Class Honours in sports science and management and received his master’s degree in sport management from Eastern Michigan.

Who made a better assistant hire? Cal Men or Women?

I’m sure he is ecstatic to have his announcement coupled with the news of the abuse in the women’s program and the complicity of the athletic department. Might not be too late to return to OSU!

With Durden as his head coach I can see Bowe being the top assistant in the NCAA in 3 years. It was pretty consensus knowledge that he was the reason Ohio state has surged these past years coaching and recruiting wise. Without Dorenkott taking away from his leadership role like what was happening I can see Bowe doing great things at Cal, and as for Ohio State… it’ll be sad that they couldn’t win these past years with him, because we will see them sink back down sadly.

Culture-wise, I really can’t see Hunter at Berkeley …but that would be so cool. He’d certainly need to buy stock in sunscreen.

He has moved up slow and steady. Good for him. Sending best wishes!!!

Wishing Matt the best of luck at Cal! You will be missed!

Durden is getting an assistant coach that has the caliber of a head coach. Well done, I didn’t think CAL could get any better but with the Durden-Bowe pair, they just did!