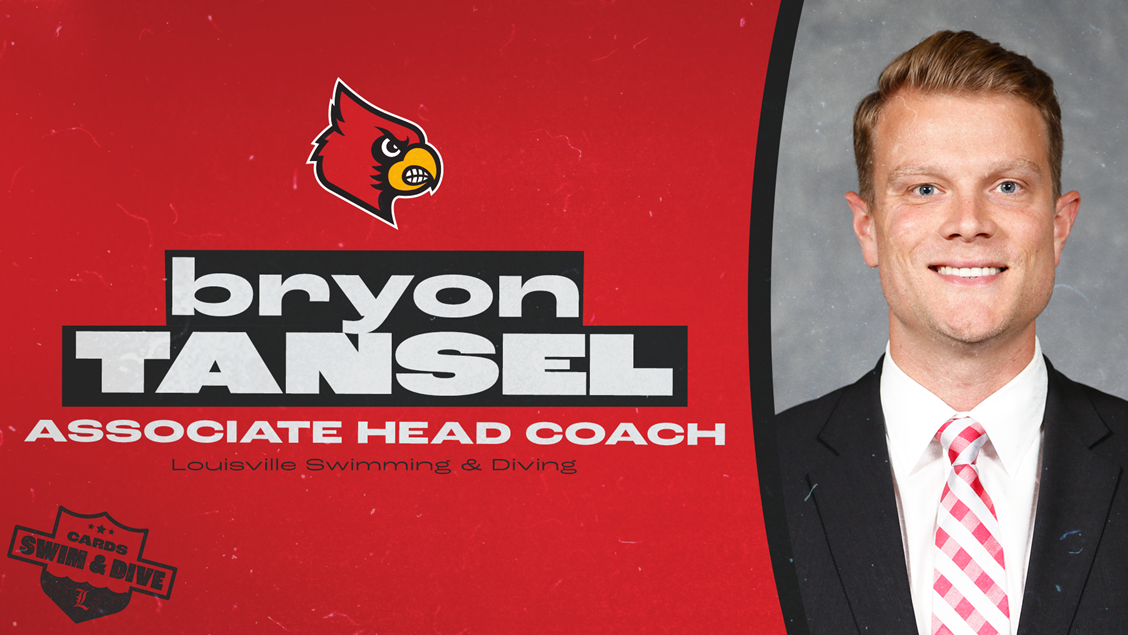 Bryon Tansel is taking a climb up the ladder, going from assistant coach at Ohio State to associate head coach at Louisville. Archive photo via Louisville Athletics

Bryon Tansel has been hired as the new associate head coach at the University of Louisville. Tansel comes to Louisville from Ohio State, where he is the third of four assistants to leave the program this offseason.

“After a lengthy and detailed national search, we found the right person to continue to elevate our program in Bryon Tansel,” said Louisville head coach Arthur Albiero. “His proven track record in development and recruiting high achieving student-athletes is displayed in how the swimmers he worked with have excelled and that includes a current world record holder. More importantly, he is a family man with great character. He will be a fantastic addition to our staff, and to our Cardinal Family.”

Tansel fills the role previously held by Chris Lindauer, who was recently named the new head coach at Notre Dame. Louisville still has an available assistant coaching staff after another assistant, Kameron Chastain, joined Lindauer as an associate coach for the Irish.

Prior to Ohio State, he had stops at LSU, Eastern Michigan, and with club programs in Dallas and Virginia.

At LSU, he worked with the sprint group and assisted his athletes to four individual school records and two varsity records in 200 medley relay and 400 medley relay. Tansel spent the 2016-17 season on the coaching staff at LSU after three seasons as an assistant coach at Eastern Michigan University.

During his three seasons at EMU, Tansel helped the men’s program win the MAC Swimming & Diving Championship in both 2015 and 2016, while improving the women’s team from fourth in 2014 to consecutive second place finishes in 2015 and 2016. Tansel led the Eagles to 27 varsity records, eight Mid-American Conference records, and a combined 12 individual and relay MAC Championships.

While at EMU, Tansel coached Cole Bateman to a semifinal appearance in the 200 backstroke at the 2016 U.S. Olympic Trials as well as three swimmers to the NCAA Championships, including freshman Delaney Duncan. Duncan became the first freshman in program history to qualify for nationals earning NCAA All-American Honorable Mention status with her 14th place finish in the 100 breaststroke.

Tansel had year-long stints in Dallas, Texas coaching for the Dallas Mustangs Swim Team national group and the Dallas Aquatic Masters. Before that, he worked at Poseidon Swimming Inc. and volunteered for the Spiders at the University of Richmond. His first coaching job was for Silver Medal, top tier USA Swim club, Oakland Live Y’ers in Troy, Michigan.

A decorated swimmer himself, Tansel swam for Oakland University, where he was named the Summit League Swimmer of the Year in 2005 and received All-Summit League First Team honors from 2003-08. He was elected team captain during his final two seasons for the Golden Grizzlies.

Tansel earned his master’s degree in sport management from EMU and graduated from Oakland University in 2008 with a bachelor’s degree in business management. Tansel’s wife Danielle is a former college swim coach as well.

Both programs will have to challenges to replace big chunks of coaching staffs that have been with them throughout much of their successes. Both programs will have to fill multiple roles while trying to maintain that momentum. So far, Louisville has done well to bring in an experienced head coach from a successful program. With a huge swath of big-time coaching openings around the country this off-season, competition for top assistants has ratcheted up. That presents a challenge for both programs as they have multiple positions to fill.

Awesome hire. OSU has really performed well these past 5 years, and the sprint program there has really put OSU on the map for the next few years to come still. You hate to see a mass exodus of coaches, but definitely a testament to the work out in. Congrats on the big promotion!

Great get for the Cardinals-top notch recruiter and develops talent. Congrats to Coach Tansel!

What in the world is going on at OSU, everything seems on the rise but the coaches are fleeing fast and furious with no new ones named and recruiting started! And with Bill D on the world staff only one coach in town!

Congratulations to Bryon and his family! Great guy, coach and representative of Buckeye Nation! He’ll be missed!!

They’ve had a ton of continuity on that staff as well. Hiring process might drag out a bit with Dorenkott at Worlds.

Plenty of time to drum up an article with multiple possibilities for each opening. Should probably get their boys class of 2024 rankings out first though