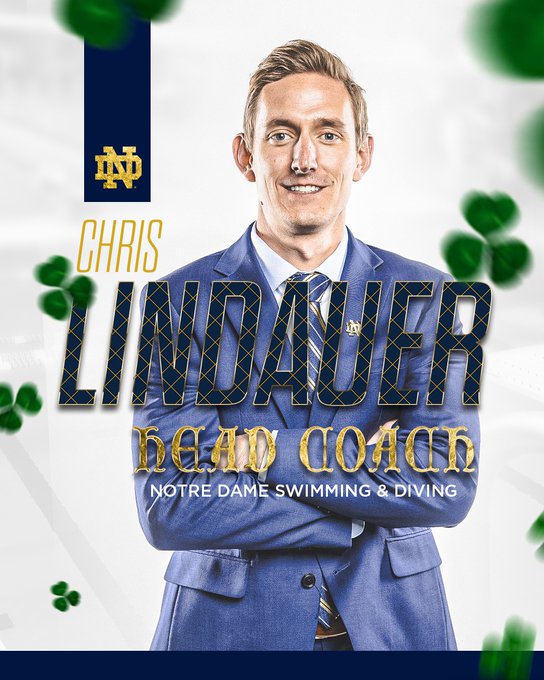 Chris Lindauer has been named the new head swimming & diving coach at the University of Notre Dame, the school announced Thursday.

Lindauer joins Notre Dame after a 13-year stint on the coaching staff of the Louisville Cardinals, serving 12 seasons as an assistant (2009-21) before being promoted to associate head coach in June 2021. Prior to coaching, he was also a three-time All-American in the pool with the Cardnals.

The head coaching position at UND opened up in October 2021 after the resignation of Mike Litzinger. Former Northwestern head coach Bob Groseth then took over the position on an interim basis for the remainder of the 2021-22 season.

It was also announced earlier this week that the head coaching position was receiving an endowment from alumni swimmer Karl Peterson.

“After a long and thorough search, we are thrilled to welcome Chris Lindauer into the Notre Dame family,” said swimming and diving administrator and Assistant Athletics Director for Strategic Engagement Juli Schreiber.

“When we started this process, we knew we were seeking a coach who understood the importance of academics, who has enjoyed great coaching success and has an innate ability to connect with student-athletes. We found that coach in Chris.

“In collaboration with Coach (Bob) Groseth and Notre Dame swimming alums Marie Labosky and Tony Fonseca, it was immediately clear to us that Chris has a passion for developing each individual not only from an athletics perspective, but also as a whole person. The experience and success he will bring to our team is phenomenal and we are excited for the future of the program.”

Hear from Peterson Family Head Swimming Coach Chris Lindauer about his goals for the program!#GoIrish pic.twitter.com/SKb0LcfqVw

During his time with the Cardinals, Lindauer helped lead the program to new heights, highlighted by the men’s team winning their first-ever ACC Championship title in 2021. That season also saw Nicolas Albiero win the NCAA title in the men’s 200 fly, and the Louisville men also claimed the team’s first-ever national relay title in the 200 medley.

This past season, Lindauer and the U of L coaching staff helped lead the women’s team to a sixth-place finish at the NCAA Championships (and third at ACCs), while the men’s team took second at ACCs (and 12th at NCAAs).

Lindauer also played a prominent role in the development of Serbian sprinter Andrej Barna, who qualified to swim at the Tokyo 2020 Olympic Games where he went on to finish ninth in the men’s 100 freestyle.

During his time competing at Louisville, Lindauer was a member of the Cardinal’s first-ever NCAA-scoring relay, as he earned All-American honors three times and was a four-time Big East champion. In 2008, he won the Coaches Award and the 2008 Most Memorable Performance Award in the Big East.

Lindauer graduated from Louisville with a degree in biology in 2008, and also worked as an assistant coach and head conditioning coach at Cardinal Aquatics. He and his wife Beth have three sons, Jack, Owen and Brady.

This season under Groseth, the Notre Dame men and women both placed 33rd at the NCAA Championships, scoring five and six points, respectively.

At the 2022 ACCs, the Fighting Irish women finished sixth and men were eighth, having finished fifth and seventh, respectively, the season prior under Litzinger.

Chris is a great coach and class act. He has had a terrific mentor in Arthur Albiero at UL. As a Boilermaker, it’s hard for me to root for ND, but wish him all the best.

Chris is a truly amazing coach and person. We hate to lose him but so happy for and proud of him!

Any rumors on other ACC job at Pitt?

Look for other associate heads at good programs. Maybe IU or UM or OSU has someone good. Seems to be the direction sports going is take chances on younger coaches to connect with recruits more.

Chris is a rockstar coach and great recruiter!
Wish my team at USC got him! It’s a dumpster fire in LA under the current staff!

No one cares. Notre Dame will be a mediocre acc team until the end of time

Looking forward to sending this to the Freezing Cold Takes SwimSwam soon.

Others have made this point, but Louisville had done nothing before Albiero and NC State was in the dumps before Holloway. If you get a good head coach and there’s some institutional support ND could absolutely become a big time program.

Only problem is Chris isn’t Arthur and he will keep Notre Dame right where they are.

If only he had spent his entire career (and swimming career) under Albiero right? I don’t understand the moronic comments on here sometimes. Why do you wish for someone to fail or only attain mediocrity? Debate is one thing but rude insane comments with no merit is just immature. Anyways, I wish you the best in all that you do. Seriously

was Desorbo something before, not much…. or many other coaches…. good support by school, good recruiting/CEO front person with capable assistants is the way to go….

so now I am praying for the end of time to hurry up an arrive….Chris is awesome. Good luck to him. and to you boo

Sorry to inform you, but in 2020 Notre Dame swimmer Jack Hoagland was the ACC Male SWIMMER OF THE MEET. I guess to you that must be a real mediocre accomplish. Especially with the company of multiple olympians and NCAA champions. So unless I’m wrong looks like ND has some real talent.

Fantastic Hire!!! Watching for ND to rise in the ACC very soon!

3 years and he dips

You’re only leaving a job like this for a top 15 or so program, or somewhere with strong sentimental/family ties. Those jobs don’t open up every day, and if he makes another move like that it would only be possible with real results at ND.

Where would he go? And why

Chris is a rockstar. He will bring the Fighting Irish back to the TOP! #LindyForTheWin #ChrisIsInTheHouse #LindauersHour