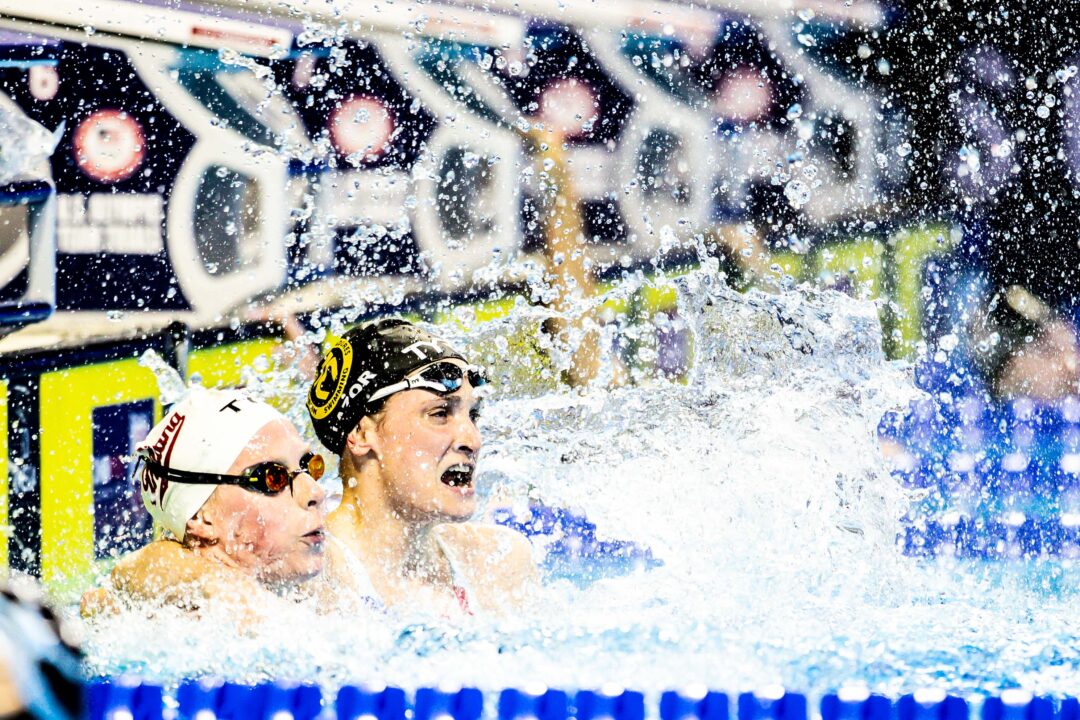 Lilly King and Annie Lazor both stood on the Olympic podium last summer and are favored to be the U.S. representatives in the 200 breast in Budapest. Archive photo via Jack Spitser/Spitser Photography

Annie Lazor won bronze last year at the Olympics swimming a 2:20.84 in finals. So far this year, she has won the event at the Pro Swim Series in Westmont and was third in San Antonio. At Westmont, she swam a time of 2:22.59 which currently sits as the #1 time in the world so far this season. She had the fastest last 50 at Trials last year so expect her to come home strong there.

Training partner Lilly King was second behind Lazor at Trials and swam to a silver medal at the Olympics with a 2:19.92. King so far this year was second behind Lazor in Westmont and won the race at San Antonio. King’s best this year of 2:23.69 sits at #5 in the world this season. As the World Record holder in the 100 version of the event, expect King to be out pretty fast.

Kate Douglass set the American Record in the SCY version of the event at NCAAs going a 2:02.19. She didn’t swim this event at last year’s Olympic Trials but did time trial the event at Virginia’s long course time trial earlier this month, clocking 2:24.02.

Ella Nelson was fifth at last year’s Trials in a 2:25.10. She was fourth at NCAAs in the yards version of the event. Nelson time trialed the event on both days of Virginia’s time trial at the beginning of the month, consistently going 2:33s.

Mackenzie Looze was fourth in the event at Pro Swim in San Antonio going a 2:31.12. She was 10th at the Olympic Trials last summer in a 2:27.85. She dropped about a second and a half in the yards version of the event from last year to this year, so if she replicates that here she should be in a solid position for a spot on the podium.

Darkhorse: Gracie Weyant – Weyant was slightly off of her best time of 2:31.10 at the beginning of March going a 2:31.56. She improved in the yards version of the event by over a second in the last year.

Interesting that Jacoby isn’t considered a finalist or worth mentioning by SS when she’s seeded 5th.

I know she won Olympic gold in the 100, but when I watch her stroke I don’t see a sprinter. I wonder if she might someday be better in the 200.

This event has been improving rapidly so although Douglass’ 2:24 is excellent for a practice race she’ll have to go considerably faster for top two.

Doug gonna surprise in this event.

Kate gonna beat one of those Indiana girls