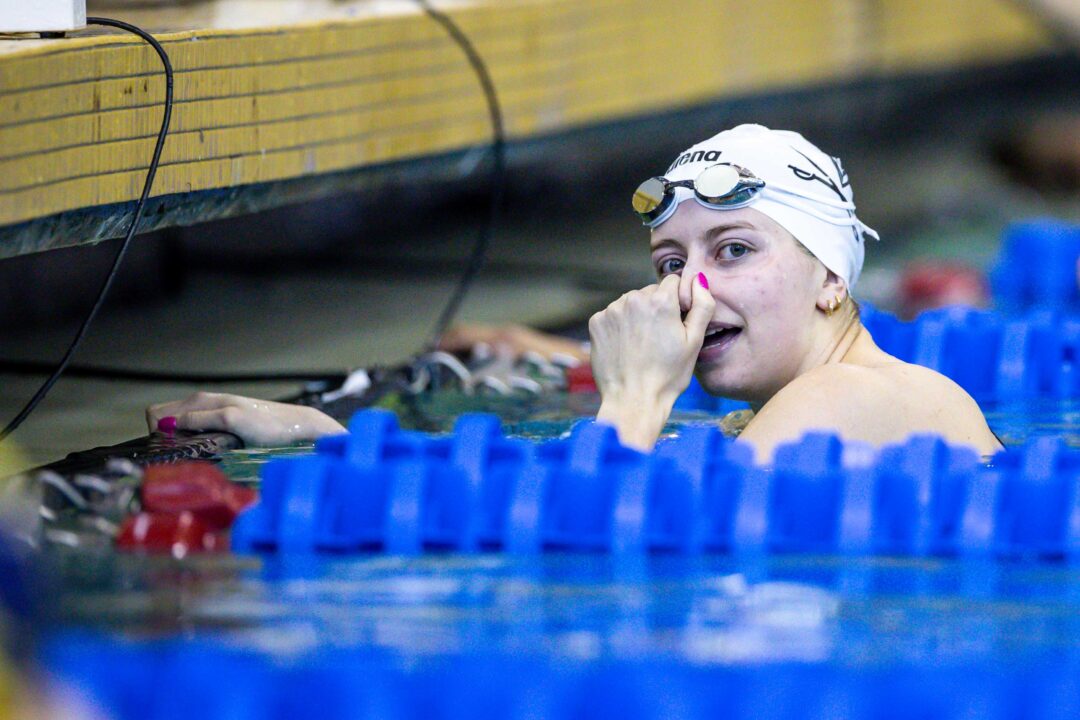 Douglass, who is the short course yards American record holder in the 200 breast, swam a long course time that unofficially ranks her fifth in the world. Archive photo via Jack Spitser/Spitser Photography

The University of Virginia is currently in the process of hosting a three-day, long course meters suited time trials meet for the purpose of preparing its swimmers for the upcoming U.S. International Team trials. In addition, this meet can also give us a sense of what some of the Virginia swimmers will potentially swim at trials later this month.

Among the day one highlights of this meet were the swims of UVA junior Kate Douglass. Douglass, who is coming off of a phenomenal NCAA meet that resulted in three individual short course yards American records, will have her long course skills be put to the test at trials and World Championships. Today gave us a preview of what she could potentially have in store for this summer.

Although she is the NCAA, US Open, and American record holder in the short course yards version of the event, Douglass will have to be a few seconds faster to have a shot at making the worlds team, especially when she has to compete with long course breaststroke phenoms like Annie Lazor and Lily King.

However, we have not seen Douglass compete in the 200 breast tapered since she was in high school, so it is likely that she will have more in store if she ends up swimming the event at trials.

In addition, Douglass also competed in the 100 free, where she swam a 54.58. This time is just a few tenths off her best time of 54.17 from Olympic trials last year, in which she just missed being selected for the 4×100 free relay with a seventh place finish.

Gretchen Walsh, the NCAA champion in the 100 free, came behind Douglass with a 56.00. Walsh broke out in long course in 2019 when she became a World Junior Champion in the event and clocked a personal best time of 53.74. However, at Olympic trials last year, she was off her best time and swam a 55.91, failing to make the Olympic team. Trials this year gives Walsh a chance at redemption, and after a strong freshman year in short course yards, she has the best chance of making her senior international debut in Budapest through the 100 free.

So I misred the Reilly Tiltmann part and starting freaking out. I read 52.74 instead of 57.24.

1
0
Reply
Branch out a little

What would swimswam be without a daily UVA article? Next up, what the Hoos ate for breakfast yesterday

How dare they cover Olympic medalists, US National Team members, and NCAA champions!!!!!

5
0
Reply
2Fat4Speed
Reply to  Branch out a little

How many times must Branden respond to inane comments like these with why we get to see more UVA items vs whatever random team you want to see?

Are there training sessions as well on the days of these trials?

Based on how comparatively slow the rest of the women were, you might be right.

Can always rely on Ol’ Longhorn’s positive comments. Can you break 3:30 in the event?

“Comparatively slow”? What does that mean? You’ve got the silver and bronze medalists coming back (currently ranked 1 and 4 in the world), and they haven’t tapered yet. Have no idea what you’re expecting from those two at this point in the year.

G Walsh best time 53.7. Goes 56.0. A 1:41 relay swimmer goes 2:00. Those are comparatively slow compared to what they’re capable of. My point, for the dimwitted in the group, is that it’s obvious the team is not rested, so KD’s time bodes well for a big drop into contention to win at trials.

She beat Huske three weeks ago

Huske is better at long course than she is at yards.

Presuming King and Lazor are in the same phase of their training cycles that Douglass is, it’s not too much of a stretch.

King was a 2:23.69 at San Antonio, so Douglass is in the ballpark based on current times. Of course, we don’t know what Douglass’ potential is in long course while we know what King’s is, but on paper they look pretty comparable right now.

I’d give Douglass an even chance at making the team in the 200 breast, though I do think the 200 IM is a better shot.

I would say that she and Walsh are heavy favorites to make the team in the 200 IM and favorites for the podium in Budapest as well… Harder to guess in the other events, but seems like an excellent shot for the 4×100 relay, at minimum, and competitive for the individual events.