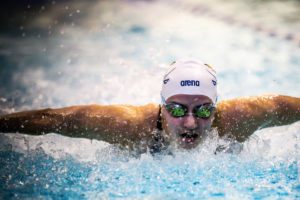 Virginia freshman Kate Douglass, one of the most versatile swimmers in the country, has 7 entries in the ACC pre-cut psych sheets.

Michigan keeps climbing. Maggie MacNeil and the Wolverines move up another spot and crack the top 5 in our pre-Conference Power Rankings

Kate Douglass is a competitive swimmer who represents the United States internationally. Douglass made headlines during her freshman year when she put up speedy times throughout the season in dual meets, her mid-season meet, and even at practice.

Kate Douglass was ranked as the #2 recruit in SwimSwam’s 2019 Top 20 High School Rankings. On February 27, 2018, Douglass announced her verbal commitment to swim for the University of Virginia.