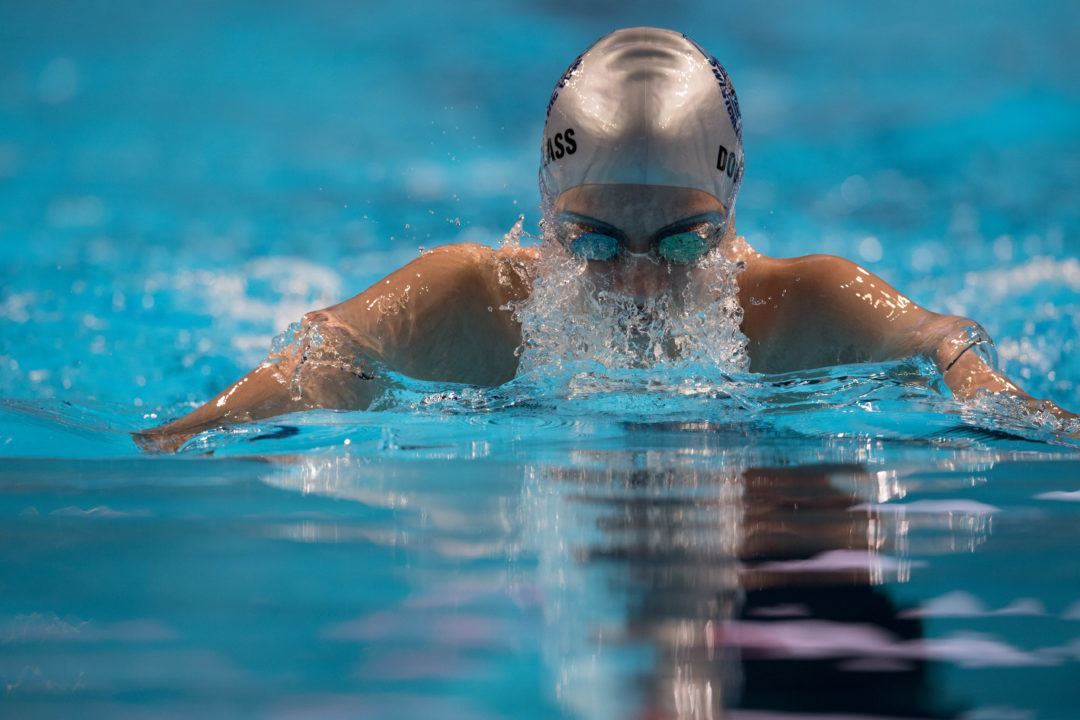 University of Virginia freshman Kate Douglass dipped into the 2:07s in the 200 breaststroke on Friday evening, putting her in rare versatile company. Archive photo via Mike Lewis/Ola Vista Photography

University of Virginia freshman Kate Douglass continued her rise to stardom on Friday evening in Charlottesville when her Cavaliers team opened up a 126-60 lead over Wisconsin on day 1 (the short course yards day) of a 2-day dual that will conclude on Saturday.

In the course of the evening, Douglass became only the 3rd swimmer in history (by USA Swimming’s time databases) to accomplish something in a career, and she did so in the same night, and it’s only October of her freshman year.

Douglass swam a new lifetime best to win the 200 breaststroke (by more than 7 seconds) in 2:07.92 mid-way through Friday night’s session, and she followed that up with a 22.28 to lead off Virginia’s winning 200 free relay to end the session. That 50 free is not her lifetime best – in high school, she was as fast as 21.67 in March of this year.

The only other swimmers that have done both of those things in their entire careers are: NCAA Champion, U.S. Open Record holder, and Texas A&M Aggie, Breeja Larson; and high school senior Alex Walsh, who will become a Virginia Cavalier next season.

While Larson’s best time in the 50 free of 22.17, done on a relay leadoff at the 2014 NCAA Championships, is not as good as Douglass’ in that event, her 200 beaststroke time of 2:04.48 is the 6th-best in history and still better than Douglass by a wide margin. That 2:04.48 was done at the 2012 University of Houston Phill Hansel Invitational – a mid-season rest meet.

These sort of cross-discipline anomalies are becoming more common as the level of athleticism in the sport of swimming increases, and especially as breaststrokers shift more from single-stroke specialists to fast-twitch burners. Sophie Hansson of NC State, for example, who was 3rd at NCAAs last year in the 100 breaststroke as a freshman, has also been 22.6 in the 50 free, and if given the chances could probably flat-start a 22.2 by the time her collegiate career ends.

Larson, meanwhile, is a late-to-the-sport arrival from softball and track who stands 6 feet tall and caught the wave of taller breaststrokers, following on Jessica Hardy (who was 21.8 in the 50 free and 58.3 in the 100 breast, but only 2:11 in the 200 breast). Prior American stars of the 200 breaststroke like Rebecca Soni (5’8″) and Tara Kirk (5’6″) were often not as tall as their sprint counterparts, which would have made this double-success that much tougher. Douglass, is 5’10” tall, and Walsh is 6-feet tall.

But for now, this elite class is a group of 3, with at least one of those, Douglass, tantalizing us with her limitless potential given the context of Friday night’s racing.

If you are asking if Douglass was suited, she was not. Pictures from the meet shows that UVA was in practice suits yesterday.

I should hope so. A meet with naked swimmers would be very inappropriate.

Having two out of the three on the same college team is going to be insane next year.

OUR HYPE IS REAL! You can have it all at Virginia with Desorbo!

Kate Douglass is amazing. However, I think we are getting ahead of ourselves to say most versatile yards swimmers ever. I know there can be a debate and folks have already posted Alex Walsh but I give you another Nashville swimmer who I think stands head and shoulders above the rest, Tracy Caulkins. She held short course American records in every stroke, but butterfly, where she was a one time World Record holder in LC, and the IM. (500 Free, 200 Back, 100 and 200 breast, 200 and 400 IM). If not for the greatest butterflier in history, she would have likely held the 200 fly short course record as well. (I am not 100% certain that she didn’t.) This… Read more »

“On course to become” – the other day I was on course to drive to McDonald’s for an Egg McMuffin, but then I passed a Chik-Fil-A and decided on Chicken Minis instead.

Just spit out my coffee lol

If I am correct, she also was the first swimmer under a minute in SCM for the 100 Back. Because of the timing of her best, I feel she didn’t get the credit she truly deserved but in the conversation about versatility, I can’t come up with anyone else who is as good. She was sort known as a breaststroker but her world records were in back (SCM) and Fly (LCM, tied with Andrea Pollack). She never fulfilled her potential LCM in breaststroke.

BTW, I am talking females. I would give the male nod to Phelps. He was also an amazing backstroker. Breast was ok but not truly world class but being the GOAT by all other definitions gives him a pass on breast.

Duh, I forgot for a second we were talking SC. Need to think more about who the male would be.

Dressel and Seliskar are getting there…

Easily Dressel. Phelps never really swam scy and I would not even rank him in my top 5 of best male SCY swimmers as a result.

”The greatest butterflier in history”? Sarah Sjostrom? Sarah did definitely not have the WR in 200 fly

Again I know there are debates and Sarah is definitely in the discussion. I am referring to Mary T. Her dominance was pretty amazing and her records took decades to break. Her 200 Fly would have won worlds in 2019.

38 years after it was actually swum.

Thats so amazing and shows how great her swim was

It seems like in your book and a lot of other people’s book on here that being the fastest ever is different than being the “greatest ever”.

Fastest does not equal greatest.
Most dominant equals greatest.

Do I have this correct?

Somehow Natalie Coughlin’s name has been omitted from this discussion. It’s been fun to watch Kate Douglas this fall, and she is unquestionably an incredible swimmer, but she has a ways to go to catch Coughlin, who, at various points, held the US Open and American records in the 50-100-200 free, the 100-200 back, and the 100-200 fly. Granted, the breaststroke arguably requires more versatility given the different leg motion, still, it’s going to be awfully tough to wrest the title of “most versatile yards swimmer in history” from Coughlin. (Coughlin did swim a 100 breast in 1:02.4 in high school, by the way, and I always thought she could have set both IM records had she set her mind… Read more »

Beat me to it

She had an OT cut in both breastrokes during high school because she qualified in every event. She has an Olympic medal in the 200 IM.

She had an OT cut in every single event. All of them.

Larson competed in softball and track and field in high school, not soccer.

I can’t find a 50 free time for Kristy Kowal, but I know she was on UGA’s 200 free relays back in the day. She may have been close.