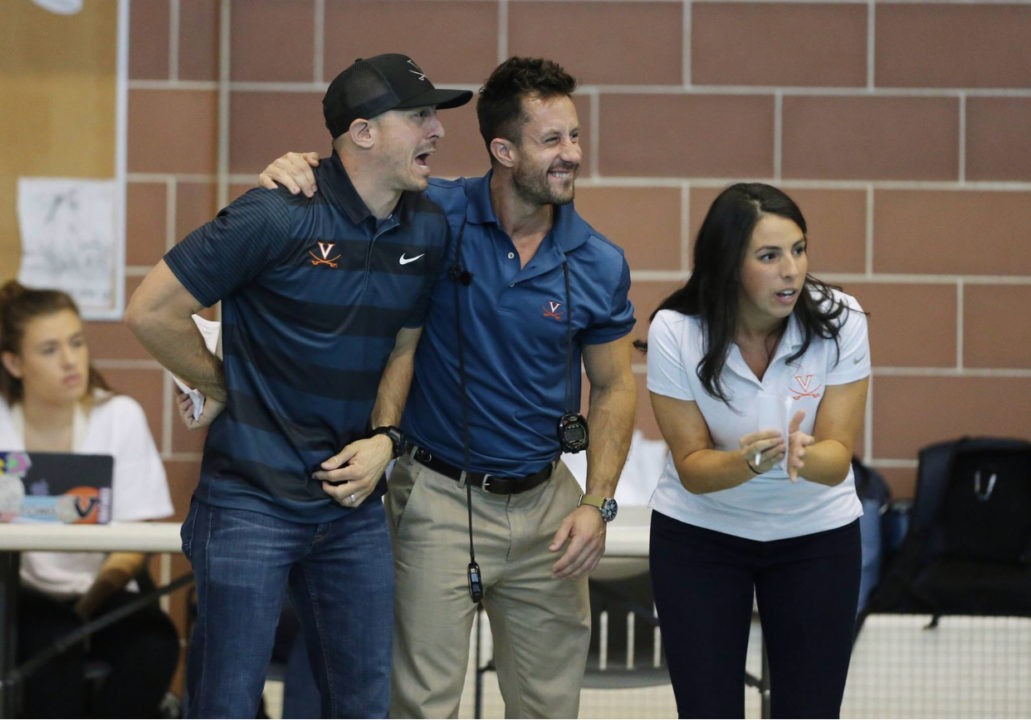 The University of Wisconsin Badgers are in Charlottesville, VA, this weekend, facing off against the Virginia Cavaliers in a two-day meet. Friday afternoon’s action was in short course yards, while the two teams will race in LCM Saturday. Through the first day of competition, the Cavaliers lead by a wide margin in both men’s and women’s competition.

Most dual meets feature the 200 medley relay, but the teams in this meet opted for a 400 medley relay, and UVA got off to a quick start with a 3:35.76 win. That’s the 3rd-fastest time in the nation so far this season, behind only Louisville and Northwestern’s times from the SMU Invite. Freshman Kate Douglass split 50.86 on the fly leg, nearly out splitting UVA anchor Paige Madden‘s 50.97.

Another Cavalier freshman, Maddie Donhoe won the 1000 free in 9:55.63 before Wisconsin’s backstroke ace Beata Nelson briefly halted Virginia’s winning streak with a 1:52.49 victory in the 200 back. That’s the fastest time in the NCAA so far this season, as well as a pool record.

Megan Doty picked the 2nd won of the day for the Badgers in the final individual event of the relatively short session, the 200 free, which she won in 1:48.13, over a second and a half faster than Madden’s 1:49.68.

The 400 medley relay was much closer on the men’s side, with UVA just edging out Wisconsin 3:12.81 to 3:12.97. While the 400 medley relay hasn’t been contested all that much yet this season, that’s still a very solid in-season time, and is actually the fastest time in the nation by over 6 seconds.

UVA’s Ted Schubert is primarily a IM/fly guy, but he jumped into distance free today and emerged victories with a 9:19.13 win in the 1000 free. According to the USA Swimming database, that’s only the second time he’s swum this even in college, with the last time being a 9:32 against Penn State two years ago.

Just like in the women’s meet, Wisconsin came back with a win in the 200 back, as Cameron Tyson stopped in the clock in 1:45.30, over two seconds ahead of the rest of the field.

Again, just like on the women’s side, the Badgers grabbed the final individual event, as Matt Novinski won the 200 free in 1:37.50.

CHARLOTTESVILLE, Va. – The Virginia men’s and women’s swimming and diving teams are hosting Wisconsin at the Aquatic and Fitness Center for a two-day dual meet beginning on Friday (Oct. 25).

The men and women each competed in eight short course events Friday night, their first home action of the season. The Virginia men and women each won six races. The women will enter tomorrow’s final day leading 126-60 while the men are ahead 116-70.

The Cavaliers won three of the four diving events with senior Sydney Dusel (Naperville, Ill.) winning both the 1m and 3m dives. Senior Bryce Shelton(Vienna, Va.) won the 1m event on the men’s side.

FROM HEAD COACH TODD DESORBO
“We had a good first session tonight against Wisconsin. The team is really proving to be a phenomenal team and a great group of teammates who support each other. They are performing really well even after some really intense training over the last couple of weeks. We are really excited with where they are at right now. There is a lot of energy and support on the pool deck coming from the team. We are improving week-to-week, which is really nice to see.

We had some first years win their first-ever collegiate dual meet races today with Maddie Donohoe in the 1,000, Kate Douglass winning the 200 breast and Konnor Klinksiek winning the 100 butterfly. It is fun to see them start thriving in the program.

I think we had an overall great team performance. Our medley relays at the beginning of the meet were really good for this early in the season. We are definitely excited about how we performed tonight and it gets us excited about the future, and that future is tomorrow morning when we have to come back and compete again pretty early with a quick turnaround. We are also going lone-course meters, which will prove to be an interesting dynamic as far as going from short course to long course in preparation of the Olympic year. That is one of our biggest focuses this year, the Olympic trials in June. I am looking forward to seeing the team perform again tomorrow and wrapping up this meet, hopefully with a couple of wins.”

DAY II OF THE MEET

Charlottesville, VA – The Wisconsin Men’s and Women’s Swimming & Diving teams both fell behind Virginia on day one of their road-opening weekend meet on Friday afternoon. Virginia’s men jumped ahead 116-70, as their women finished the day ahead of the Badgers 126-70.

The headliner for the Badgers is no surprise, as Beata Nelson set a pool record with her first place finish in the 200 Yard Backstroke (1:52:49), an NCAA Championship B standard qualifying swim.

On the boards, Tazman Abramowicz stayed hot off his performance against Green Bay, winning the men’s 3 meter and easily qualifying for NCAA’s with a final score of 374.40. Abramowicz also finished third in the 1 meter with a score of 308.03, also an NCAA qualifying score.

On the women’s side, Tereza Vithoulkas placed third in both the 1 meter and 3 meter, scoring 266.10 and 292.58, respectively, both NCAA qualifying scores.

The Badgers will take on Virginia in Day 2 of the Invitational on Saturday.

Unsuited 2:07?? Wow! She should be on her way to take down Lily King’s record this year.

Beata also got the pool record in the 200 back

The DeSorbo Effect is legit! This is Virginia! #LEVELUP

I’ll give you this one. I was one who could do both of those… In October nonetheless. I had a few teammates who could too.

But I think they are talking about females in this…..

Alex Walsh and Breeja Larson are the only two names on the sub 2:07 list that have done it. It would take a more complicated search to find any others.

Though UVA was supposed ta be great this year? The men are pretty slow and women not impressive. No wonder they ducked out of the Michigan/Tennessee tri-meet!

Yea and got beat!!! Also Michigan was scared to swim UT

If you look at the coaches’ social media, you’d see they did heavy squats the morning of the meet. Looks like they’re training right through

Pretty funny how you cant spell “thought” while at the same time having a pretty bad thought.

PS, you cant spell “to” either.