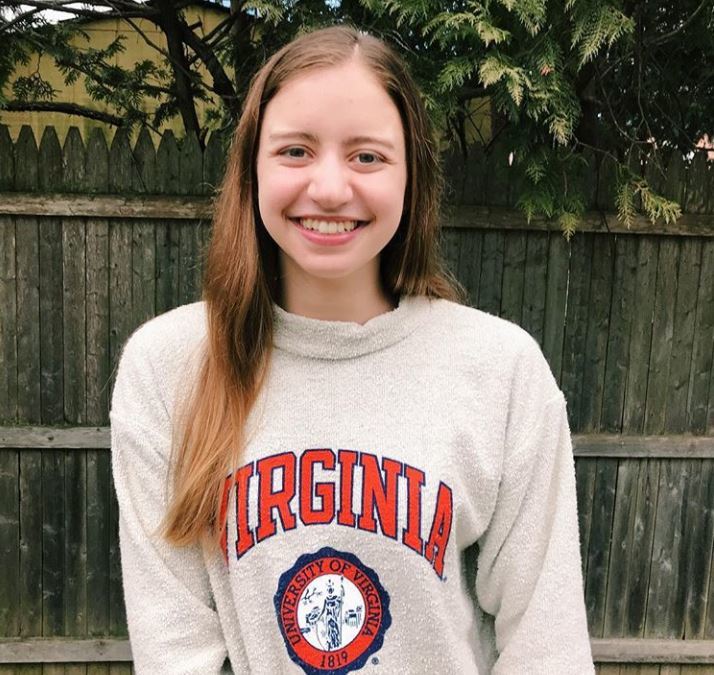 Kate Douglass of Pelham Memorial High School and Chelsea Piers Aquatic Club has verbally committed to swim for the University of Virginia beginning in the fall of 2019. Current photo via Kate Douglass (Instagram)

Kate Douglass, a USA Swimming Scholastic All-American and NISCA All-American from Pelham, New York, has announced her verbal commitment to the University of Virginia’s class of 2023 where she will join Maddie Donohoe of The Fish and Ella Nelson of Nashville Aquatic Club. Douglass wrote on social media:

“So excited to announce my verbal commitment to swim for the University of Virginia!! Go Hoos! ?⚔️?”

Douglass is a junior at Pelham Memorial High School and currently swims for Chelsea Piers Aquatic Club (although most of her best SCY times come from her years at Westchester Aquatic Club). One of the top sprinter freestylers in the nation, she owns the 15-16 National Age Group Record in the 50 yard free (22.04, tied with Simone Manuel). Douglass is also a superb breaststroker; she was runner-up in the 50 free and placed third in the 100 breast, 4th in the 200 IM and 8th in the 200 breast at 2017 Winter Juniors East. She also competed in the 100 free, in which she won the C final with the 4th-fastest time in the meet (49.10) and the 100 fly.

Douglass won the 100 free and was runner-up in the 50 as a freshman at the New York Public School high school championship. The following year she won both events, setting NY state records in the process. She represented Team USA at 2017 FINA Junior World Championships, earning a silver medal as part of the women’s 4x100m freestyle relay.

Douglass’ best times would already have impacted UVA’s results at the ACC Championships. She would have scored in the A finals of the 50 free, 100 breast and 200 breast, the B final of the 200y IM, and the C finals of the 100 free and 200 free.

Wow, what a class being built!!

They gone be real hard to beat in the coming years! Watch out Stanford!

Wahoos really moving up! Color me impressed; Douglass is a top get!

How are Stanford’s recruits shaping up for this class in comparison; how many of the Top 10 so far?

Still can’t get over the Cardinal’s amazing Dream Team for their 2022 class. “Game Over” as they say!!!

stanford hasn’t had any recruits commit yet for the 2019 class, but usually stanford commits verbal later, as their first commit for 2018 (allie raab), didn’t verbal until july, which was considerably later than most others.

It’s realistic that UVa women will win NCAAs in less than 4 years. This is a breakaway train now.

It is good to be optimistic. Anyway, a stronger Virginia team makes the championship more competitive which is great for the sport.

The Wahoos are trending straight up…. to the top. This staff is so positive, and energized, and it is paying off in great times, and great recruits. Keep it going ‘Hoos!

Huge congrats Kate! You can expect great things in your future at UVA!

Oh, wow. Big time get! If UVA had any weakness this year, it was breaststroke, and they now have two huge verbals for class of 2019. Obviously Douglass is also a massive sprint talent. Stanford women are not going to lose any time soon, but a top-3 finish is feasible for UVA in the next 3 years.

UVA is a terrific school in a beautiful location. Also a 1-day drive from almost the entire East Coast. It could become the go-to destination for a LOT of fast swimmers.

UVA has been around since 1819. Why is their location all of a sudden going to make fast swimmers come there? Especially in 2018 when you can easily fly anywhere.

Thanks for the history lesson. UVA’s location hasn’t changed, but the attractiveness of the swim program has arguably changed for the better (perhaps just in the last week). UVA is likely getting more looks from the 100 million people who live on the East Coast now.

Congratulations! The Crown Jewels seem to be added daily! …Recruits are not only gonna stay in the East but starting looking East .. I am not baffled in the least….. Al are you awake or consulting with Coach about what to do next?