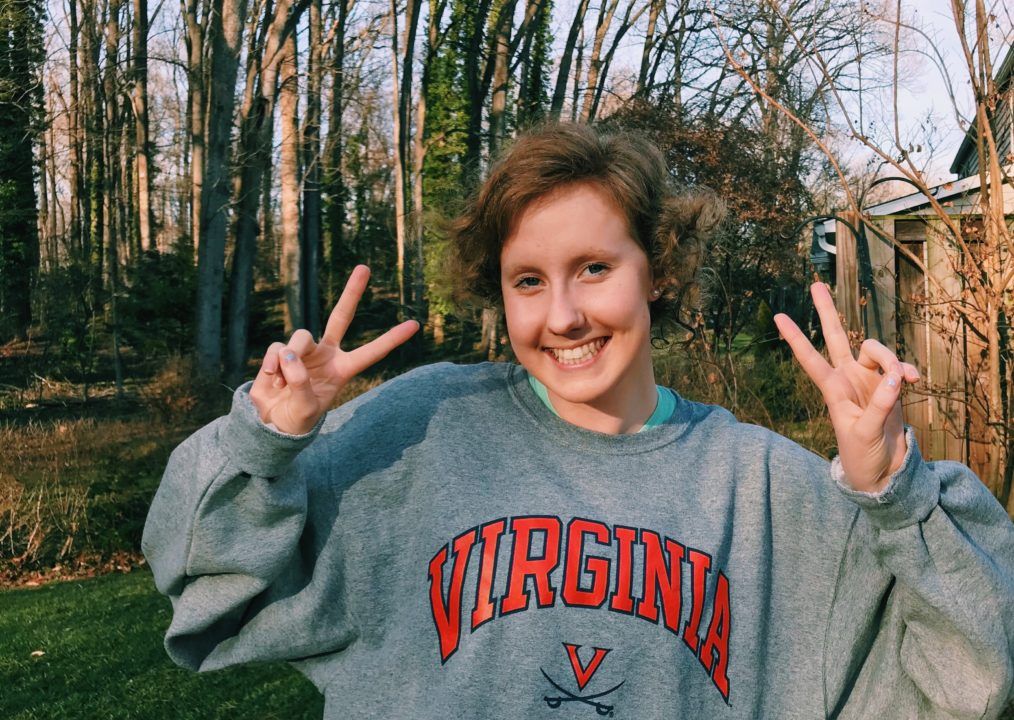 Maddie Donohoe from The Fish and Bishop Denis J. O'Connell High School has announced her verbal commitment to the University of Virginia beginning with the 2019-20 season. Current photo via Maddie Donohoe

At the 2020 Patriot League Champs, Feld would’ve placed in A-finals in the 400 IM and 200 back, so she should be an immediate contributor to the program.

Carlson should immediately be an impact player for ECU, a team rebuilding after their temporary program cut led to a mass exodus of transfers last year.

At the 2019 Connecticut HS Open State Championships, Kehley finished fourth in both the 200 free and 500 free.

Distance freestyle standout Maddie Donohoe has announced she will join the University of Virginia women’s swimming and diving team, recently crowned 2018 ACC Champions, in the fall of 2019. Donohoe is a junior at Bishop Denis J. O’Connell High School in Arlington, Virginia. Donohoe made her announcement following Virginia’s stellar performances, especially in freestyle, at ACCs. She wrote on social media:

“I’m excited to announce my verbal commitment to continue my swim and academic career at the University of Virginia! Thank you to my coaches and to everyone who has gotten me to this point. I cannot wait to swim for UVA! Go Hoos??’

A USA Swimming Scholastic All-American and NISCA All-American, Donohoe won the 200/500 freestyle events last month at the National Catholic Swimming & Diving Championships, which was a repeat of her performance as a sophomore at the 2017 VISAA Swimming and Diving Championships last season. At Winter Nationals in December she placed third in the 1650, 8th in the 500, 15th in the 200 back, and 20th in the 200 free.

The Cavs are picking up a big in-state talent with Donohoe’s verbal commitment. She would have been Virginia’s top scorer in the 1650 at 4th at this weekend’s ACC Championships. She also would have made the B final of the 500 free, an event in which her future UVA training partner, freshman Paige Madden, placed 5th.

Donohoe’s top SCY times would rank on UVA’s all-time lists at #4 for the 1650 and #3 for the 1000 free. She has times that are similar to UVA great Leah Smith when she committed to the Cavaliers. Smith was a 16:02 miler at 16 years old; she left UVA with 15:25.30, the third top performer and the 7th-fastest performance of all-time.

Congratulations to Maddie and Virginia! You are going to enjoy Virginia beyond words. The DeSorbo Effect (making swimming fun & swimmers fast while appreciating everything the University has to offer) is in full effect across the USA. HOOS’ next?
Go Maddie Hoo!

WahooWah Maddie. One of the best decisions you will make.