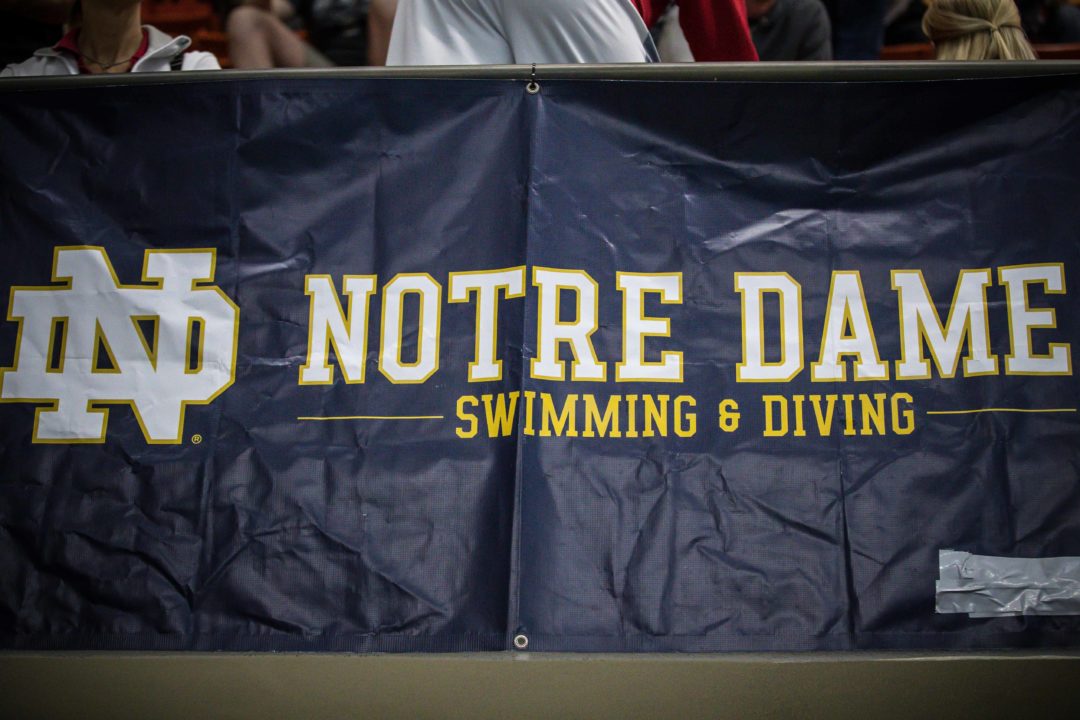 The endowment from alumni swimmer Karl Peterson will help underwrite the head coach's salary, among other things. Stock photo via Jack Spitser/Spitser Photography

The vacant head coaching position at the University of Notre Dame has received an endowment from alumni swimmer Karl Peterson and his family, the school announced Wednesday.

The gift from Peterson, a 1992 grad, and family members Holly, Karter and Kennedy will help underwrite the head coach’s salary, provide stability and resources and create funds for use within the athletics department.

Once the Fighting Irish name a new head swim & dive coach, their title will officially be the ‘Peterson Family Head Swimming Coach.’

UND is currently conducting a national search for its next head coach, with former head coach Mike Litzinger announcing his resignation early on in the 2021-22 season (October). Bob Groseth, the former head coach at Northwestern, took over in an interim capacity for the remainder of the season.

Chris Lindauer, an associate head coach at Louisville, is widely expected to be named the team’s new head coach this week.

“The gift the Peterson family has made to Notre Dame will help provide long-term financial support to the program they love,” said University Vice President and James E. Rohr Director of Athletics Jack Swarbrick. “Student-athletes are at the heart of our mission as an athletics department and the Peterson’s support will ensure we continue to bring in world class coach-educators.”

Peterson added: “While it’s been 30 years since I last raced for the Irish, the benefits from being a student-athlete at Notre Dame persist.

“Coach Tim Welsh was a great influence on so many of us over more than three decades. His mission that we pursue academic and athletic excellence with self-discipline and love for one another helped us grow and prepared us extremely well for the future.”

A coaching position should not be named after someone. First, it comes across incredibly arrogant. Second, it sounds like the Peterson family owns the coach or the coach is just coaching the Peterson family. A school gift is wonderful. Name the pool or some other part of the facility after the donor, not a hired position.

If someone brings money to your program, money that can ensure it’s future viability, accept that money, name what they want after them, and don’t let your ego get in the way.

Also, you’re fighting a practice that has been around forever. Lots of endowed positions in the world of academia, including professors, are named after the people who paid to endow them.

“The Peterson Family Head Swimming Coach” LOL only in America

Lindauer was decided weeks ago

Thank you Karl Peterson and family.

Always great to see financial commitments made to programs

Yeah, hopefully there are protections in place to ensure that the Notre Dame Athletic Department doesn’t have incentive to cut the program in order to repurpose the endowment. I hate to be so cynical when someone has made a generous gift, but there has been some pretty bad behavior among AD’s towards sports like swimming in recent years.