The Wolverine women earned their 3rd-straight undefeated season, winning all but one event. The Michigan men swept all 16 events.

Auboeck, the defending national champion, left the second pack behind to hammer home with a 14:42.29 in the 1,650, after a 500 that he felt was lacking

Weitzeil, who on Thursday became the first woman under 21 seconds in the 50-yard freestyle, contested that event again in meters, going 24.70. 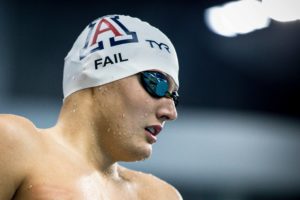 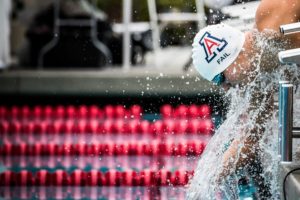 Felix Auboeck is Austrian freestyle specialist and Olympian. He built up an extensive international swimming resume before heading to the States to swim for the University of Michigan.

Auboeck quickly made an impact on the Wolverine swim team, earning Big Ten Freshman of the Year honors after his first conference championships. He took down Peter Vanderkay’s meet record in the 500 yard freestyle to grab maximum points in 4:10.63. He also won gold in the mile in 14:29.25 and edged his way in the top-ten all time in the event and fastest ever freshman. He also picked up a pair of bronze medals in the 200 yard freestyle and 800 yard freestyle relay.

At his first NCAA Championships, Auboeck picked up a silver and bronze medal. His bronze came in the 500 yard freestyle where he touched in 4:08.95, 0.03 behind Texas’ Townley Haas who took silver. Clark Smith claimed the gold.

His silver came after a tough battle in the 1650 yard freestyle. Auboeck along with Smith, Akaram Mahmoud and Jordan Wilimovsky put on a spectacular show for the crowd in Indianapolis. In the closing stages of the race the four swimmers wet stroke-for-stroke, pushing each other to post the four fastest ever mile swims. Smith took the gold, but Auboeck was right behind to touch in 14:22.88. Mahmoud took the bronze while Wilimovsky missed out on a medal in fourth. There was just over 1 second between the top four.

Coming into the 2019 NCAA’s, Felix had primed himself to win multiple NCAA titles, seeded 1st in both the 500 and 1,650. In the prelims of the 500 however, Auboeck gained over 9 seconds from his seed, going from 4:09.37 at B1G Championships to 4:18.40, falling from top seed to 35th and missing a 2nd swim altogether. In the 200 free, Auboeck gained nearly 2 seconds from his seed to go 1:35.13 and place 38th, indicating that the 1,650 would go in a similar direction as his other races. However, on the final day of competition Auboeck had an incredible momentum and mental shift, taking the lead in the 1,650 around the 650 mark and never relinquishing it. He touched at 14:23.09, a bit off his best time, but more importantly crowning him an NCAA champion.