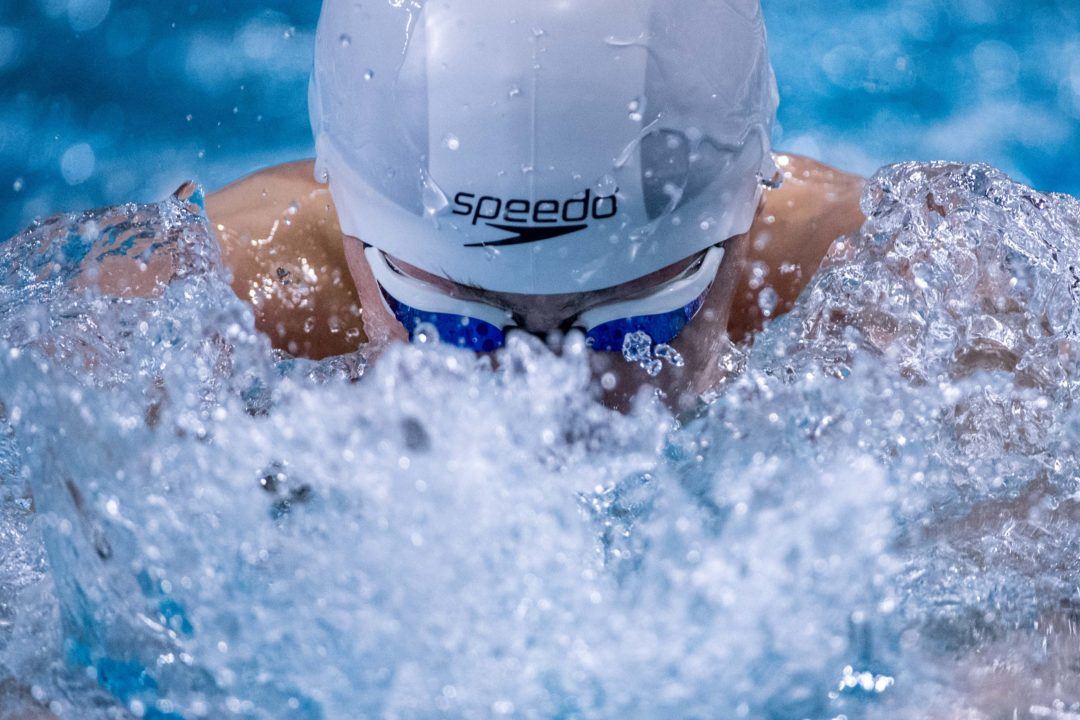 Carson Foster (pictured) and Regan Smith are our honorees for Swimmer of the Year in the 15-16 age category. Archive photo via Mike Lewis/Ola Vista Photography

Regan Smith, who was 14 at her first meet of 2017, rose quickly to the top of the 15-16 age group after gaining access in February. Well, frankly, let’s just say any age group. After warming up with a couple of short course meets in early spring, which included swims that placed her in the top-10 all-time for the 15-16s in the 100 back and the top-20 in the 100 fly, Smith turned her attention to long course season. At 2017 U.S. Nationals and World Championship Trials, she became the youngest swimmer to qualify for Budapest by finishing second in the 200 back with 2:08.55. At World Championships she unleashed a 2:07.19 in semifinals to break the World Junior Record in the event, shaving 0.10 off Daria Ustinova’s 2015 mark of 2:07.29. (Kaylee McKeown erased Smith’s WRJ the next night, going 2:06.76 in finals.)

In August, Smith represented the United States at 2017 Junior World Championships in Indianapolis. There she won gold in the 100m back, defeating Taylor Ruck who had broken the WJR in semis with 59.28. Smith’s finals swim of 59.11 took down the Championship Record, World Junior Record, and National Age Group Record for 15-16 girls, which had previously belonged to Missy Franklin with 59.18, in one fell swoop. She then swam a 58.95 to lead off Team USA’s mixed medley relay. A few days later, Smith repeated her 59.11 leading off the U.S. women’s medley relay. While FINA does not recognize leadoffs on mixed relays for World Junior Records, USA Swimming does allow them, so Smith’s 15-16 NAG now stands at 58.95. Smith also claimed the 200m back title in Indianapolis, establishing a new Championship Record with 2:09.07.

2017 marked the ascent of Carson Foster into the Big Leagues. Throughout most of the year he was just 15, but he proved to be one of the biggest stars on Team USA. Coming off a strong 2016 Winter Juniors, in which he was an A-finalist in the 200/400y IMs, Foster proceeded to rise through the ranks, meet by meet. He won nearly all the events he swam at ISCA Junior National Championship Cup in March, then finaled in the 100/200 back and 200/400 IM at U.S. Nationals and World Championship Trials, earning a spot on Team USA for 2017 Junior World Championships in Indianapolis. He won the 100/200 back and 200/400 IM at Summer Junior Nationals in August, which was his tune-up meet for Junior Worlds. There, he earned a gold and two silvers in the 4×100 medley relay, 4×200 free relay, and 200m back, respectively. His 1:57.87 in the 200 back was a best time by 1.26 seconds and represented a 10-second drop year-over-year.

will there be 17-18 age group swammy awards this year?

There will be. Anne has had a few little technical hiccups outside of her control – but it should be up tomorrow.

Carson Foster is good in fly, back, free and IM. I’m trying to think who else in swimming history has been similar to Carson.

Jack Conger is good in backstroke, fly, and free. Did Conger ever compete at a high level in the IM?

Katinka Hosszu comes to mind. Michael Andrew. Tom Shields (though not sure he swam much IM – I bet he could’ve). Ryan Murphy (same). Caeleb Dressel (same). Part of the reason why it might seem like they’re not is because the sport isn’t structured to allow swimmers to be good at all 4 of those things after the youth level. Even for someone like Michael Phelps. So it might not be as obvious. But, I bet a lot of swimmers could be great at the senior level at all of those, if they tried.

Sarah Sjostrom has been sub-minute in the 100 back in LCM.

What could be fun is if in the mid-year of the Olympic cycle, they had… Read more »

Ryan Lochte excels in the back, free, fly and IM as well, now that I think about it.

I agree about Katinka – I think that’s what made her 400 IM in Rio so outstanding. She ran away with the race right from the gun and no one got close to her.

Now that MP is retired, the IMs may become more interesting, with swimmers like Carson and Jake Foster and others coming on strong.

Honorable Bobo’s (but not only) mention: Destin Lasco, the king of negative split and really a pleasant(ville) swimmer to watch swimming

😆 Yes, he deserved an honorable mention. He was huge at last short course juniors East. He won on backstroke but my feeling is that his freestyle could be his best stroke in the future. So smooth, so efficient. 50.46/1.50.30 last summer in LCM.
I’m a fan of Mr Lasco and his technique sinced I watched him swim for the first time when he was 10 in 2012. I’m not going to stop supporting him now that he’s one of the best American juniors and is closer and closer to great senior times. More than ever a fan!

100% agree. The reason he is so good is because he has phenomenal technique and he perfects the little things (turns and underwaters in particular).