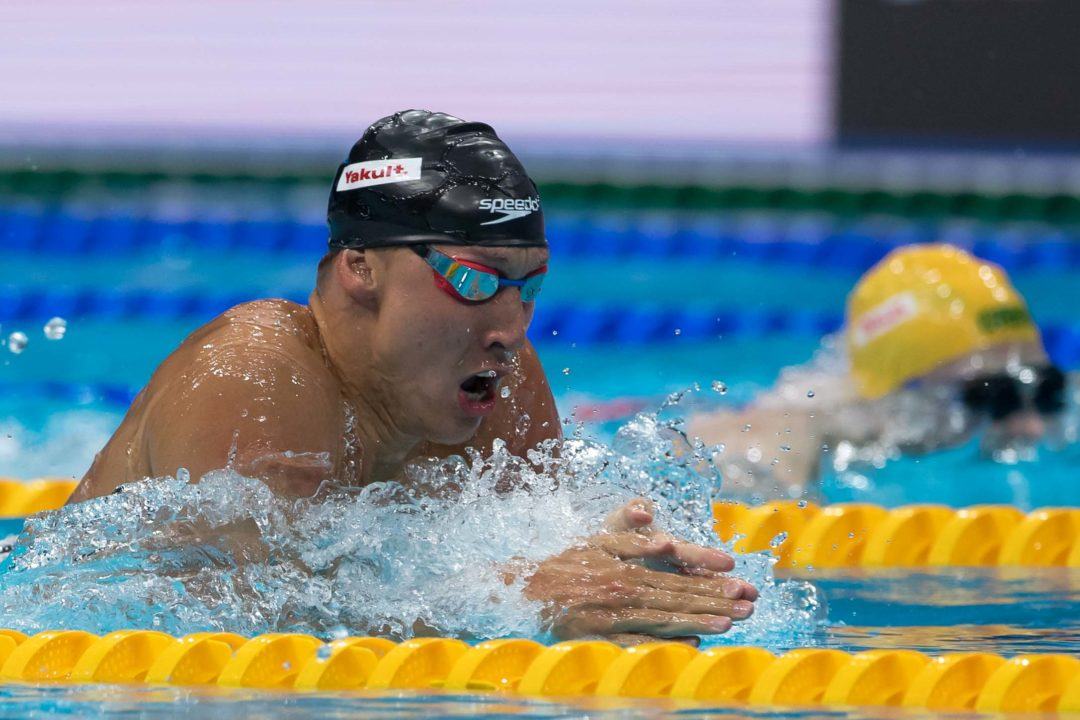 In fourth place after the butterfly and third on the back-to-breast turn, Chase Kalisz of Team USA blew away the field on the breaststroke leg of the 200 IM and held on for the win, clocking the only sub-1:56 in the final with 1:55.56. Kosuke Hagino of Japan closed well but couldn’t make up the distance Kalisz had put in place with his quick breaststroke split (32.6), and settled for the silver medal in 1:56.01. China’s Wang Shun took third with 1:56.28. Sixth-place Qin Haiyang of China went 1:57.06 to break his world junior record of 1:57.54 from earlier this year.

Heading into tonight’s final, the Americans had won the last 7 straight World Championships golds in this event on the backs of Michael Phelps and Ryan Lochte. Tonight, Chase Kalisz made it 8 straight for the Americans, holding off Japanese IM star Kosuke Hagino to win it in 1:55.56. Hagino held the lead through the front half as expected, but Kalisz roared to a 32.63 breaststroke split to go by him and never looked back.

Phelps and Lochte could swim all the strokes including the breast. That’s why no one else has swim 1:54.

Chase’s gets an amazing distance/stroke. He makes it looks so smooth.

Sure, but they were both better fly/back swimmers than breaststrokers. Just look at what other individual events they swam, and their best times in those, compared to Kalisz.

Debateable,I think his 2 breast is just as good.he doesn’t swim it because the us is so strong in it he has no shot at making the team,but we are weaker in the 2 fly

dude is incredible. Definitely showed right here and right now that he is the new heir to the throne. Insane swim and can’t wait for his 4IM dude is ready for revenge.

15
0
Reply
expert coach
Reply to  Its on