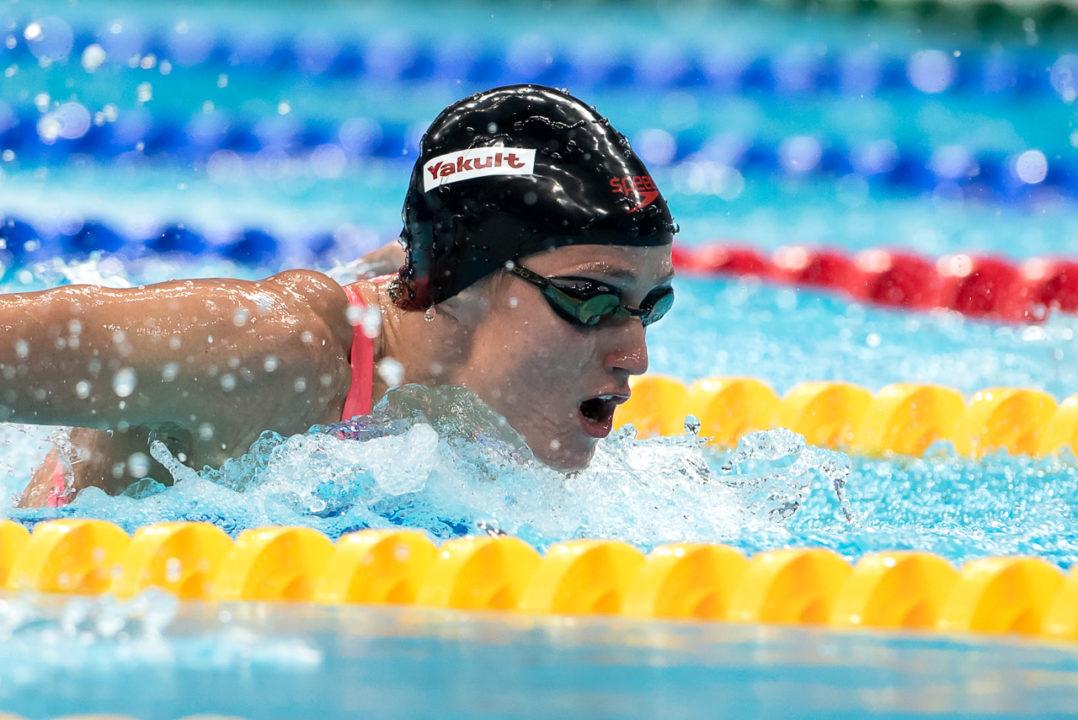 Watch the race video of the women's 200 meter butterfly in Budapest. Current photo via Peter Sukenik/www.petersukenik.com

In perhaps the most exciting race of the night, or at least in close contention with the thrilling men’s 100m freestyle final, Spain’s Mireia Belmonte gave her country their first gold in the women’s 200m butterfly in a very tight battle against Germany’s Franziska Hentke and Hungary’s Katinka Hosszu. Belmonte is the defending Olympic champion in this event, and she proved her mettle in this final. In sixth after the 50, she moved up to second at the 100, then moved ahead with a gutsy 3rd 50. Belmonte held on, despite a very strong charge from Hentke.

Hungary’s Katinka Hosszu set the pace on the front half, leading with a 1:00.41 at the 100-mark. Spanish Olympic Champion Mireia Belmonte made a comeback on the 3rd 50, though, and held off a blistering 32.23 final split from Germany’s Franziska Hentke. At the finish, Belmonte got her hands to the wall first, touching in 2:05.26 to Hentke’s 2:05.39 to give the Spanish their first ever Worlds title in this event. Hosszu held on for 3rd in 2:06.02.

Korea’s An Sehyeon was just one place shy of the podium with a new Korean Record time of 2:06.67. Junior World Record holder Suzaka Hasegawa of Japan finished 6th in 2:07.43, just behind China’s Zhang Yufei (2:07.06).

I love to point out every chance I get how dominant Mary T. was; her 2:05.96 from 1981 would have gotten bronze here. That’s no knock against these ladies, but Meagher was just so far ahead of her time.

She had a beautiful stroke

Just wait for the trolls to move in and start accusing her of taking “something”. I feel very lucky to have seen her race in person many times. It makes the imagination soar wondering how good she would have been today with all of the technological advancements and stroke/turn advancements as well. Great job pointing that out NP.